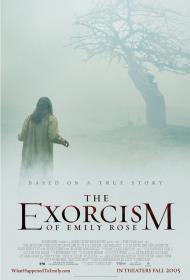 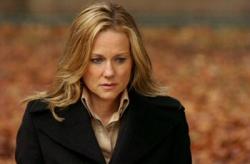 There's only one thing wrong with The Exorcism of Emily Rose and that's the marketing plan behind it. The previews would have you believe that it's a horror movie, but it's not. It's a courtroom drama that revolves around a potentially supernatural event. Horror elements do play a part of the story, but there is definitely more courtroom than scares.

Supposedly based upon real events, the film details the trial of Father Moore (Wilkinson). He's accused of the negligent homicide of Emily Rose, a young woman whom he claims was possessed by a demon, but that medical science states was a psychotic epileptic. Emily's story is told in evidence as flashbacks and it is only in these moments that proof of the supernatural is shown. In the present, there are hints of it, but are they really, or is it just the mood of the case making those involved jump at shadows?

That's one of the movie's greatest strengths. It lets you decide whether or not Emily was possessed or if there really was a scientific explanation and the version of the story that Father Moore tells is just his belief system imposed on the events. The angle of the film does play up the creepiness factor of what happened, but nowhere in the present is their concrete evidence of anything abnormal.

The always reliable Laura Linney is the star of the film as Father Moore's defense attorney; Erin Bruner. Her firm is hired by the Catholic Diocese and Erin hopes to parlay her acceptance of the case as a means to become a full partner. She's an agnostic, or thinks she is, to which Father Moore replies, "If you're not sure if you're an agnostic, then you definitely are one." Despite her lack of faith, Father Moore wins her over to his side with his passionate beliefs and obvious concern and distress over the late Emily Rose.

Like Linney, Wilkinson turns in another solid performance. He is one of the most consistent actors working today, never turning in anything less than a convincing performance and unlike some British actors, he is able to deliver an impeccable American accent.

Considering that The Exorcism of Emily Rose opened as the number one movie with over $30 million in its opening weekend, perhaps there wasn't anything wrong with the movie's marketing after all. But will it have legs now that it's known that it's not a true horror film? 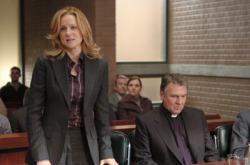 Laura Linney and Tom Wilkinson in The Exorcism of Emily Rose.

The biggest problem with any movie that claims to be based on actual events is that it never states what is actual and what is fabricated. As Scott wrote, this movie is strongest in it's approach to not definitely saying whether these events are true or not, thus making The Exorcism of Emily Rose a possible debate on religion. If you believe in God and the devil then Emily's possession may seem valid. If not, then Emily was just a girl who had a hard time adapting to life away from her close knit family and thus manifested horrific illusions brought about by being separated from her strict religious upbringing and education.

The movie's weakest aspect is it's approach to religion. Is the Priest a zealot quack or medically ignorant? The prosecuting attorney constantly states his religiousness but is never shown having the slightest inkling that he has any true faith. Emily Rose comes from a very devote catholic country family whose mother seems quietly crazy and thus dismissed by the lawyers as invalid witnesses.

Logic tells us that Emily Rose's experiences were not real. There is no need for the writer and director to make her story seem fake. Common sense already does that. The real trick to this story was to make her story seem real and thus raise the question of possession and exorcism. Although the director tries to distract the audience by throwing in some mildly frightening images, he fails to do that.

Call it my lack of faith or my experiences that people too often create excuses when they find themselves in situations that they cannot handle, but Emily Rose's story is easily explainable. Her problem did not begin until she moved away from her family for the first time. Something happened to this girl but this movie never explores her life away at college and thus leaves to many questions unanswered. Was she traumatized at school? Was her family and religion so dominate in her life that she could not socialize outside her hometown? The movie never answers any questions, it just raises them and in the process makes for a very weak defense case. 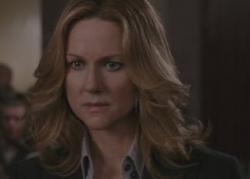 It seems unlikely that simply being away from her family home and adjusting to college life could cause the extreme symptoms that Emily Rose displayed. Either she was mentally and physically ill or she was possessed by a demon. The movie does a fine job of showing us the trial and then letting the witnesses tell Emily's story through their memories of the events. It is up to each viewer to decide what they choose to believe.

That said, any movie "inspired" by real life events is bound to be dramatically heightened. It would be interesting to know which of the events actually happened and which were added. For example, did the doctor that attended the exorcism really get killed in a freak car accident the day he was scheduled to testify?

In the end this is just a movie, and a pretty good one at that. The questions of faith that it raises are interesting but will probably not change anyone's mind.