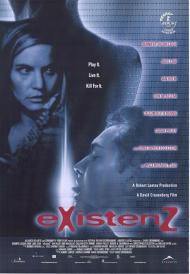 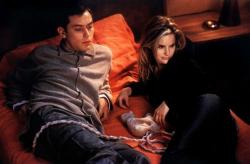 From the (some would say warped) mind of David Cronenberg (Scanners, The Fly) in 1999 came eXistenZ. It is set in a vague near future where symbiotic video games called game pods are “grown” from organic matter and have replaced traditional electronic games. These game pods plug into a bio-port implanted on a person's spinal cord, which attaches to the game pod via an umbilical cord. The movie opens at a demonstration for a brand new gaming system called eXistenZ.

Jennifer Jason Leigh stars as the world's greatest game designer, Allegra Geller. During this opening scene she is nearly assassinated by a member of a radical group of anti-technology folks known as Realists. A sales rep played by a baby-faced Jude Law, escorts her to safety to a nearby motel room. Together they must enter the game of eXistenZ to ensure it wasn't damaged during the melee at the conference demonstration, where an Umby cord was ripped out during the downloading process.

What follows is a trippy virtual-reality game where the players are never quite sure what to expect. What's real and what's just the game becomes increasingly difficult to distinguish. The people they meet are characters in the game. Like real video games there is a basic plot which must be followed but the actual details allow for quite a bit of freedom of choice on the part of the player(s). For instance certain characters get stuck in pause mode until the correct trigger line is spoken to them by the player.

Cronenberg's trademark gross-out visuals are included. The game pods have buttons that resemble nipples and the way they plug into a person's body is all quite sensual. In one scene, for no particular reason, he has Law insert his tongue into Leigh's bio-port as if he's performing oral sex on her. The script explains this as something his character felt compelled to do by the game itself but just why this is the case isn't addressed. Clearly it was a visual image Cronenberg desired to create simply to up the ick factor.

There is also a scene where Law eats a gourmet meal of mutant lizards and amphibians at a Chinese restaurant. It is quite disgusting. After licking the deformed bones clean he constructs an organic pistol from the body parts just like the one that was used to shoot Leigh in the opening scene.

Leigh and Law don't have any particularly appealing chemistry together, although the game lamely tries to force a romance between them. They are both just fine in their parts though. They are believable as these characters that may or may not be who they seem. In fact the entire movie plays with the concept of reality versus virtual-reality and how the lines between them may very well become blurred at some point.

Nearly fifteen years years after its initial theatrical release, the technology on display in eXistenZ remains futuristic. The story stays small and intimately focused on the two stars, all of which helps keep the movie from seeming dated. It offers an intriguing look at one possible future of gaming technology as seen through the prism of David Cronenberg's twisted imagination. And unlike so many of today's movies, eXistenZ doesn't overstay its welcome at just over 90 minutes.