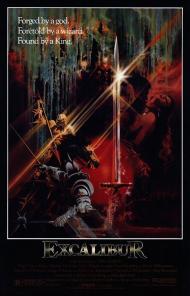 Nicol Williamson as Merlin in Excalibur.

Director John Boorman had been developing a film adaptation of the Arthurian legend since 1969, but could find no studio willing to take on the project. Instead he was offered the chance to write and direct a version of the Lord of the Rings. When his script for that was rejected, being deemed too expensive to shoot, he returned once more to King Arthur and this time was able to seal a production deal.

The plot follows the familiar legend fairly closely with just a few minor alterations. It hits the highlights of Arthur's story, cramming as much as it can into one film. The story of his parents, Uther and Igraine, starts the film and then we skip ahead to the sword in the stone, then the formation of the Knights of the Round Table, including Arthur's meeting Lancelot and Guenevere. And of course all this is accomplished with the help of Merlin the Magician. The story continues with the quest for the Holy Grail and Lancelot and Guenevere's affair. It all leads up to the final battle between Arthur and his bastard son, Mordred, who he fathered on his half-sister Morgana Le Fay.

That's an epic story to cover in one film and if it were made today, it's one that would surely be split into a trilogy. It would be a smart move. Instead, this film tries to cover too much in its 2 hour and 20 minute running time. Certain aspects of the story feel rushed and skimmed over quite quickly. It can't have helped that Boorman's original cut was over 3 hours long, but was trimmed to shorten it.

Perhaps the very best thing about Excalibur is the look of it. Filmed in Ireland, the locations are green and lush and quite beautiful to look at. The film's one and only Oscar nomination came for Cinematography. The production design and costumes do their best to match the beauty of the scenery. The armor is particularly well done. Constructed of aluminum, it gleams in different and ingenious designs. And the look of the film is accompanied by a soundtrack filled with the music of Wagner, that matches it perfectly.

The cast is mostly quite good. Nigel Terry, who was 35 at the time, manages to convincingly play Arthur as a young boy through to an older man. Helen Mirren plays Morgana with relish, but is unfortunately underused. Nicholas Clay as Lancelot is the film's weakest acting link. He's handsome enough, but he lacks the charisma needed to play Arthur's greatest Knight. There's a definite lack of chemistry between he and Cherie Lunghi, who played Guenevere. Although neither of them are helped by the script, leaving the love triangle portion of the story as one of the weakest plotlines.

It is Nicol Williamson, as Merlin, who truly steals the film. His is the most intriguing character and Williamson plays the part to perfection. He has a great speaking voice and he uses it to great effect. He manages to be both threatening and provides a few moments of much needed comic relief. There's far more chemistry between Merlin and Morgana then there ever is between Lancelot and Guenevere. This may have been helped by the fact that reportedly Williamson and Mirren couldn't stand each other in real life, meaning some of the sparks between them are genuine.

Several supporting members of the cast were unknown when the film was made, but are quite famous today. Gabriel Byrne played Uther and Patrick Stewart has a small part as Arthur's father in-law. Ciaran Hinds has a very small part, while Liam Neeson plays Sir Gawain. Watching the film today, these parts standout much more than they did when the film was released.

Excalibur isn't a perfect film, although the first hour comes pretty damn close. The second half of the film is when it loses its way a bit. It's the darker half and it never feels as cohesive as the first half does. There's just too much story and it's not handled deftly enough.

Given the rise of fantasy films since the success of Peter Jackson's Lord of the Rings trilogy, I've been surprised that no one has tried to do another film version of the Arthurian legends. Until someone does, Excalibur, warts and all, will remain the definitive big screen adaptation.

The sin of lust permeates the story. Whether sincere or manufactured, it nearly brings down every important man in the film. The love affair between Arthur’s wife Geunevere and Lancelot is as famous as any. Lancelot the pure finally gets laid and then becomes wracked with guilt when he sees how it affects Arthur. How was he to know that it would bother his best friend if he had sex with his wife? The sex does not end there. Arthur bangs his sister Morgana who gives birth to a boy who grows up to have a seemingly incestuous relationship with his mother.

I enjoyed seeing now famous actors in small roles over the lead actors. This was Nigel Terry’s first film since his debut in 1968's The Lion in Winter, in which he played a half-wit medieval wanna-be king. Terry has neither the acting chops nor the charisma to successfully play such an iconic role as Arthur.

Nicholas Clay as Lancelot is just as bland, seemingly cast merely because he was in good enough shape to do some unnecessary nude scenes. Lancelot should be played with over-the-top arrogance. His pride in his skills and virtue should annoy the hell out of everyone around him. Clay’s performance is just plain boring.

Of the female actresses, only Mirren generates any interest. All of the women are merely sexual objects to stir the men's blood. She slinks around the castle listening to secrets and gossip when not planting rumors of her own. Her flirtation with Merlin is brilliant. He does not trust her but is fascinated by her none-the-less. When Merlin tells her that the knowledge of the dragon would burn her, she replies, “Then burn me.” Flames then shoot from his staff. It is as close to sex as Merlin can manage.

I agree completely that a remake could work if the right person was at the helm and the proper cast was put in place. If and when that happens they should take much from this version as it has so much to offer. The pace is nearly perfect and the intrigue is never ending. Agreeing with Scott and the Academy, the look of this film, including the few special effects, hold up amazingly well after all these years. I loved this film when I first saw it in theaters with my best friend and still enjoyed it these many years later.

Lust plays an integral part in the story to be sure but there is a larger theme at play. Set in the 5th Century AD (although the armor is from a much later period) it portends the coming of Christianity to Britain. The sorcery of Merlin and Morgana symbolizes the pagan beliefs and superstitions that predated the arrival of Christ's teachings. The finding of the Grail brings peace and prosperity to the land just as it signals an end to the time of magic.

Scott mentioned that Boorman originally intended doing a movie version of The Lord of the Rings but instead wound up adapting Thomas Malory's Le Morte d'Arthur (first published by William Caxton in 1485). This movie demonstrates just how large a shadow Arthurian legend has cast over all subsequent British fantasy writing. Both J.R.R. Tolkien and J.K Rowling were clearly influenced by these tales. The Lord of the Rings ends suspiciously similarly, with the main characters sailing off to the Undying Lands together just as Arthur sailed to Avalon. In both stories this signals the end of one age and the dawning of another. And both Gandalf and Dumbledore are less than thinly disguised later incarnations of Merlin.

One thing this movie does wonderfully is maintain a consistent mood throughout. A dreamlike quality permeates it from beginning to end. The lush forests and ancient castles that provide its setting create an authenticity rarely found in the genre. In fact Excalibur exudes a strange yet potent combination of realism and fantasy that is unlike any other movie I've seen.

I agree the second half seems jumbled. In fact the script is a bit of a mess and the dialogue borders on the inane at times, such as when Merlin -stating the obvious- proclaims, “The future has taken root in the present.” in a tone of voice that suggests he is uttering something profound. The focus of the story meanders around from Arthur, to Lancelot and Guenevere, to Merlin and Morgana, to Percival and Lancelot, to Morgana and Mordred and back around again.

The special effects hold up remarkably well. Arms are realistically sliced off in battle and the scene where a crow eats the eye of a rotting corpse remains quite disgusting. It took several days to capture this moment on film while the crew waited for a crow to eat the sheep's eye that was being used for a prop. Today's CGI doesn't look as real as this scene. There's no question about it, Excalibur is a flawed motion picture, but it nonetheless casts a singularly impressive spell.