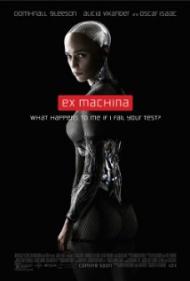 Ex Machina is a thought provoking science fiction film that raises questions about conciousness, artificial intelligence, and what our perceptions are, particularly when sex is brought into the equation. The film is written by Alex Garland, author of 28 Days Later and Sunshine (both directed by Danny Boyle) among others. Unlike those earlier films, Garland also directs this one. It's a slickly packaged, well acted film whose only real weakness is its slow pace that results in a film that runs about 15 to 20 minutes too long.

It certainly wastes no time in getting to its main premise. The story opens with Caleb (Gleeson), a programmer at Bluebook (think Google), who wins a Willy Wonka type lottery where the prize is getting to spend a week at reclusive Bluebook CEO Nathan's remote estate. Once he arrives he learns that Nathan has developed a robot with artificial intelligence. He tells Caleb that he wants him to put this robot through its paces and, using the Turing Test, prove whether or not it has conciousness. The rest of the film takes place over the course of the week with Caleb spending solitary time with the robot, who Nathan has named Ava, and with Nathan himself, most often as Nathan gets drunk.

Ava is played by Alicia Vikander and although quite overtly robotic, she is most definitely feminine. The only flesh covered portions of her body are her face, hands and feet, but it's enough, particularly when accompanied by her need to be rescued, to bring out the protective male response in Caleb. As the week goes by we start to realize that the test isn't quite what Nathan first described and that Caleb is just as much of a guinea pig as Ava.

The majority of the film takes place at Nathan's remote home (in reality a hotel in Norway), with just the three main characters as its focus. Fortunately they all do a superb job of acting. Oscar Isaac is arrogant as hell as Nathan, counting on his wealth and high IQ to make him always correct. Gleeson is the naive young man, at first in awe of his employer and easily manipulated by insecurities. Alicia Vikander captures the combination of innocent sexuality and other worldly nature of her character perfectly.

While all of the proceedings do provide some food for thought, at nearly 2 hours, there's room to pick up the pace. Instead, Garland keeps things moving very slowly and deliberately. There's a lack of urgency to the proceedings despite the countdown clock nature of the story with its set timeline of one week. There are inevitable hints to how it will end, but I wanted it to get there quicker.

The only action comes at the film's climax and it leaves the possiblity of a sequel should Garland wish to make one. There's enought left to explore with the character of Ava and any number of ways the story could go. And when a story leaves you wanting to know more about the central characters and what will happen to them after the credits roll, that has to be a good thing. 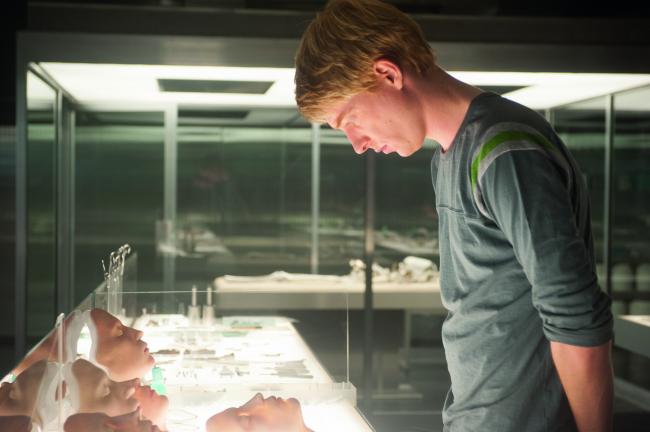 I have to disagree with Scott on this one. The slow pace is not a weakness at all and it does not run 15 to 20 minutes too long. There is not a wasted moment of screen time. As he wrote, it jumps right in and we learn about Caleb's history through his conversations with Ava. We also learn more and more about Ava and she becomes so much more than we originally thought.

The setting plays a huge part in the film. Nathan lives on an estate that takes hours to fly over in a helicopter. The landscape features glaciers, waterfalls, rivers, forests and mountains. It is in direct contrast to the rooms in his home. When Nathan first shows Caleb the room he will be staying in, I thought to myself, "There are no windows, how claustrophobic." As if he had read my mind, Oscar Isaac turns to to Domhnall Gleason and says, "I know what your thinking. There are no windows..." The only room with any windows seems to be in Nathan's living quarters.

I do agree with Scott on this film being thought provoking. Nathan clearly has a Victor Frankenstein complex, playing God by creating "life." Which, of course, raises the question of whether or not he has. It is pretty much the point of the story. Nathan wants to prove that his experiment is a success and uses Caleb as part of his study. At first, Caleb feeds right into Nathan's ego. After Nathan tells Caleb his work is, "...the greatest scientific event in the history of man." Caleb responds, "If you've created a conscious machine. it's not the history of man. That's the history of gods."

The problem however, is that Nathan is such a controlling person that he forgot some basic laws of human nature. He also forgot to read Mary Shelley's classic, where the experiment come to life is harder to handle than the creator anticipated. Nathan is so caught up in the glory of his creation that he forgot to appreciate the glory of his creation.

The ending is open to a sequel and I would very much like to see one but I am not sure it is needed. Ex Machina plays out like a mystery with a wonderful story arc. Another installment may show what happened to the characters but I doubt it would add much to the discussion. 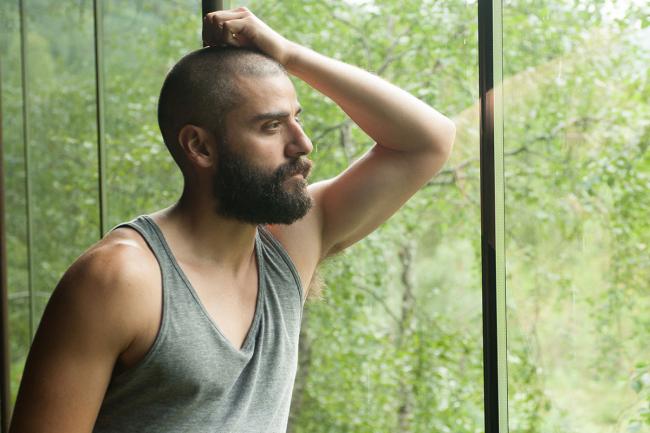 Ex Machina immediately pulls you in to its claustrophobic world. The languid pace didn't bother me much, but I wouldn't have minded if it was 15-20 minutes shorter. Eric mentioned Frankenstein but I was more reminded of The Island of Dr. Moreau. Like Dr. Moreau, Nathan lives in isolation, far removed from the meddling eyes of society. Rather than trying to turn animals into humans, Nathan is creating artificial intelligence. Both men use unscrupulous methods.

I agree with my brothers about the acting. Domhnall Gleeson, Oscar Isaac and Alicia Vikander are the break-out stars of 2015 and they all give terrific performances here. Gleeson takes us along on Caleb's journey. I enjoyed the way we slowly learn more and more about Nathan's world and his past experiments. Oscar Isaac makes Nathan, not only arrogant, but also quite sinister. His best moment is the scene where he disco dances with his servant woman. All I'll say about Vikander is that she steals the movie as Ava.

One thing that almost made me laugh was when I first saw Ava. Her sexuality is so obvious. Scott wrote that her only flesh covered features are her face, hands and feet. That may be true but she also has fairly large breasts and a woman's curvy butt. Two things not necessary in the creation of a human-like consciousness. Clearly Ava was created to fulfill a heterosexual man's desire.

Like all good science fiction, Ex Machina takes the viewer on a journey, both visual and intellectual. It is simply but effectively executed, the set-up is intriguing, the script thought-provoking and the cast excellent. I'd certainly be open to the possibility of a sequel.