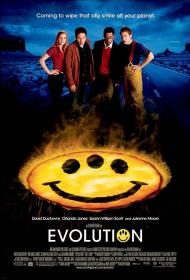 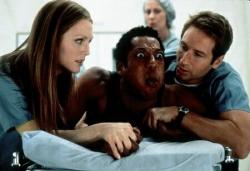 Evolution is a completely lousy, poorly put together comedy (I didn't laugh once) that wasted 2 hours of my life.

The dialogue is from junior high school. "Give me back my friend, you big sphincter!"and "Liar Liar Pants On Fire!" are two of the many childish lines. The acting could have been done better by any number of people from local community theatre. David Duchovny had best be grateful he was born with looks because that is all he has going for him. Run back to X-Files David. You do not have the screen presence, or talent, to carry a film. Does the name David Caruso mean anything here?

I could write more and tell you the plot, but it would all be bad and I feel enough of my time has already been wasted because of this movie. The only positive thing I could think of when I left the theatre was thank God I didn't pay for my ticket. 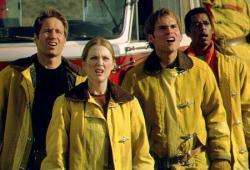 Pretty much this movie sucked. Sure it had state of the art special effects and a big name cast but neither of those things could salvage this wreck of a script. The premise is interesting enough and Evolution could have worked as a Men In Black or Galaxy Quest type sci-fi comedy. Except both of those other movies were funny. The humor here has been dumbed down and seems to be aimed at fourth graders.

A meteor crashes somewhere in Arizona and to make a long story short alien creatures start evolving at an incredibly fast rate, threatening to take over the planet. The only moments worth watching are pure eye-candy. Such as when a giant alien bird/reptile is loose in a mall. The movies climax is not only completely preposterous but is also quite disgusting. Imagine giving an enema to a giant blob-like creature with Diaharea. Sounds entertaining right?

As I left the theatre the only thought in my head was regret at not only having paid for my ticket but Eric's as well. A bomb! 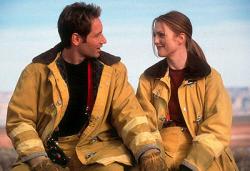 Evolution is the perfect example of how important the writer is to the movie making process. Here you have a big budget, special effect driven, movie with a great cast, and a well known director and because of the flatness of the jokes, the juvenile dialogue, the whole thing falls completely apart.

A comedy of this type needs to build as it goes. Take Ghostbusters, Ivan Reitman's smash 80's hit, the jokes build and build throughout at the movie so that you are laughing harder by the end, harder than you would be if you heard the same jokes at the beginning of the movie. That is what this movie tries to do, so that by the inevitable, good guys triumph ending, you are supposed to be standing up and cheering, instead you are just groaning and waiting for the end.

Not that I didn't laugh a few times, because I did, but only the occasional chuckle here and there, but not even enough really for the movie to qualify as a comedy.

I do disagree with Eric's opinion of Duchovney. I think he does possess the talent and charisma to carry a movie, just not this movie. And Julianne Moore? What the hell was an actress of this caliber doing in this trash? First she shows up in Hannibal earlier this year and now she is in this trash? Someone get this woman a career advisor, and quickly!

The only positive thing I could think of as I left the theatre was, thank god I hadn't had to pay for Eric's ticket as well.