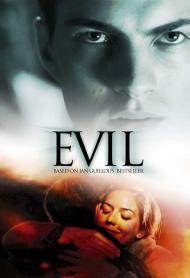 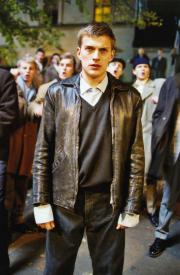 I have spent much of this past year watching foreign films.   Other countries seem to have so many original stories, and are void of the many cliches that Hollywood is infested with.    Then, I came across Evil (Ondskan) from Sweden.

A middle class jock in the 1950s going to a private boarding school was already done in School Ties (1992). Instead of football, Erik is a champion swimmer. As in Another Country (1984), Erik has issues with the upperclassman having so much authority. One scene is directly lifted from Europa Europa (1990) where a teacher has the main character stand in front of the class and dissects his physical features in the name of supposedly identifying their ethnic origin.

Erik is a teenager who is prone to getting into fights.  His abusive stepfather beats him for getting into trouble or for having poor grades.  His normally compliant mother eventually decides to sell some of her antiques to afford a private school to send Erik away to.  He makes best friends with his brainy roommate.  He vows to not get into fights so as to not disappoint his mother.

Although he struggles to keep his anger under control, Erik does retaliate in kind whenever the upper classmen throw shit at him, literally.  In one scene they bust into his room and throw a bucket of excrement in.  He and his roommate clean it up and he returns the favor.

Erik is a completely likable guy, and you certainly want him to see him get back at the jerks in charge.  However, the movie is a bit vague on a couple of points.  One scene has an upperclassman read aloud a letter to Erik, from a girl who was fired from working in the kitchen.  It implies that she is pregnant with Erik's baby.  They were never shown having sex, so I am not sure if the guy was just trying to piss Erik off or was she actually with child.  I saw this with subtitles so perhaps I missed something in the translation.

Another issue is that Erik can beat up anyone he wants to.  The movie never shows him in a boxing class, yet he just knows he is a great fighter.  Wilson is only 5' 7" yet Erik has the confidence and ability to beat up everyone.  As in Billy Jack (1971), before beating someone up he announces how he is going to do it and then proceeds to carry it through.

Evil is not an original story by any means, but you will find yourself rooting for Erik every step of the way.   At first you think that the title refers to Erik, as the movie opens with him beating another boy bloody.   You soon learn that it is actually referring to the world around Erik and he is just responding in kind.   This was nominated for an Academy Award for Best Foreign Film as well as winning several other awards.   I liked this movie, but feel it has been overly praised.