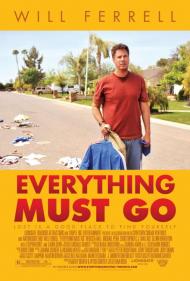 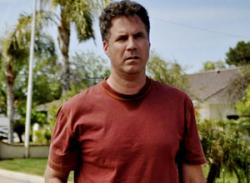 Will Ferrell shows his dramatic ability in Everything Must Go.

Like a lot of comedians before him Will Ferrell tries his hand at a more dramatic role with Everything Must Go. While he doesn't have the strongest dramatic acting ability, he does prove with this movie that he can play a grown-up, more subtle part than he typically does. Also, his innate likability and the history he brings to the screen from his previous performances gives an added depth to the character of Nick that a different performer wouldn't be able to provide.

When the movie starts, Nick is a guy not having a good day. Not only does he lose his job, but when he gets home he finds that his wife has placed all of his belongings on the front lawn of their house and changed the locks so that he can't get inside. A recovering alcoholic, Nick's reaction to these developments is to buy a shitload of beer and get drunk on the lawn. When the police arrive they attempt to take him away but his AA sponsor is a detective who tells him that according to the law, Nick can hold a lawn sale for five days and so by posting a few signs around his belongings, he can remain living in his yard. The rest of the movie takes place over those five days as Nick sheds the baggage in his life, both literally and figuratively.

Based on a short story, the movie also runs fairly short at just 90 minutes. Because of the brevity, we learn only a limited number of things about Nick. Both he and his wife were alcoholics. She, who is never actually shown in the film, has been sober for a year, while Nick has only been "sober" for six months and I say "sober" because he relapsed several times during those six months, one such relapse leading to infidelity. We learn that his father was an alcoholic. Nick was a baseball star in high school and it's possible that his life peaked during those years. His wife and he are childless, although they've spent thousands of dollars on exotic goldfish, which it becomes evident acted as a sort of child replacement for her.

Nick is reminded of his past through his belongings, which he does begin to sell. He also revisits his childhood with the help of a neighbor kid whom he befriends and who helps him sell his stuff. A glance at his high school yearbook prompts him to visit a girl he knew in those years. And a young couple moving in across the street reminds him of he and his wife and their younger days.

While as you can tell, the plot deals with serious issues, the movie isn't without humor.  What movie with Will Ferrell could be? He almost can't help but be funny, even in the stark confines of this story.

This is a subtle film that keeps the mood real and doesn't end with too much drama.  The emotional payoff is minimal, but somehow satisfying anyway. Ferrell is in every scene and his charm and talent keeps you on his side through all of it. I doubt this performance will mark a full departure from comedy for him, but it could mark a new beginning in his career. 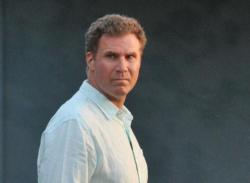 Will Ferrell in Everything Must Go

Scott, I know you are a big Will Ferrell fan, and he does a decent job here, but I believe you liked this film so much because you were personally in a place that allowed you to connect with Nick Halsey and his situation.  Without that connection, this film has very little to offer.  It is slow paced and oh so very, very depressing.

Nick's day starts bad and over the next five days his life just keeps getting worse.  As Scott wrote, there is little emotional payoff.   By the end of the film the only thing decided is that Nick finally understands that his life is, whether he likes it or not, at a huge cross roads.  We do not know if he will be alright.  We are given a scene where he cleans urine off the toilet seat, as if that means he is now responsible and considerate.  The only certainty is that he is ready to move on.

Of course that is the point of the story, but the process is painstakingly dull.  He is inebriated the first half of the film.  He makes connections with a boy and a pregnant neighbor.  They are supposedly part of his therapy, but it is all internal.  We never see why he decides to move on, he just does.  Nick merely comes to a new understanding.

Nick created his problems.  I neither liked or disliked him.  I neither rooted for nor booed him.   He is in a bad place, but I was left cold by this situation of his own making.   No one can help him but himself.   I was emotionally unattached to him and as such, could not wait for this film to end. 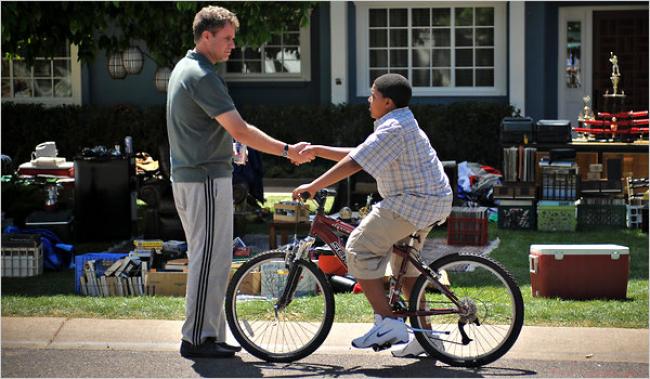 Will Ferrell and Christopher Jordan Wallace in Everything Must Go.

As Scott mentioned, this movie was based on a short story. It was written by Raymond Carver. Carver was a poet and a writer of fiction who lived in, and wrote about, the American Pacific Northwest. He's often credited with reinvigorating the short story as an art form during the 1980s. He was also an alcoholic who died from lung cancer at the age of 50 in 1988.

“Why Don't You Dance?” is the original title of the 1978 Carver short story that inspired Everything Must Go. In it the reader learns far less about the Will Ferrell character than you get here. Robert Altman's Short Cuts (1993) was likewise based on several Carver short stories. Alcoholism and domestic squabbles were a common theme in his work as reflected by the plot of both the Altman movie and Everything Must Go.

I felt quite a bit of empathy for Nick. Sure he's selfish - all addicts are – but he's clearly in such pain that I couldn't help but feel compassion for him. The yard sale is symbolic of his life. No longer can Nick hide behind walls from the world. He eventually heals because, over the course of the movie, he's forced to consider the feelings of others for the first time in years. This manifests through his relationships with the pregnant woman and the neighbor boy. Everything doesn't get completely spelled out by the end of the story but I think Nick is going to be okay.

I've never been a big fan of Will Ferrell. His humor isn't really my thing. As Nick Halsey he creates an actual human being as opposed to playing his usual comic sledgehammer. I disagree with Scott about one thing. I have never found Will Ferrell to be innately likable. In fact annoying and obnoxious are the first two words that come to mind when I think of him. I think his success here comes more in spite of his work in previous movies rather than being enhanced by them. Either way you look at it, I was impressed with his performance.

I found Nick's journey to be emotionally compelling. I especially enjoyed his relationship with Kenny. Nick is there at a crucial time in Kenny's life just as Kenny is there for Nick during his crisis. What begins as a purely practical business arrangement becomes a friendship even before either of them realizes it. Although it borders on the sappy at times, their bond seems quite genuine. The relationship between Nick and the pregnant woman doesn't ring quite as true.

Everything Must Go is a nice little character study that proves Will Ferrell can act.