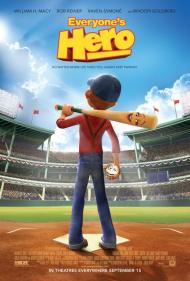 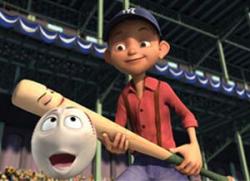 Everyone's Hero was absolutely loved by my 10 year old baseball loving son. He would play it everyday if he could. Most days, I can find him in the backyard playing by himself if no one else is around. He pretends he is at bat. Now, will non 10 year-old, baseball fans like this movie as well? I can't say for sure, but it is good clean childish fun.

Yankee Irving plays sandlot ball, but he never gets a hit. His dad is a janitor at Yankee Stadium. One night, Yankee delivers his Dad's dinner to him and finds himself in the Yankees locker room. A pitcher from the Chicago Cubs steals Babe Ruth's bat, "Darling", and Yankee is the only witness. No one believes his story and his dad loses his job. The Yankees are heading to Chicago for the final games of the World Series. Yankee's Dad is out of a job and the Babe does not have his lucky bat. Yankee heads out, with a talking baseball, to retrieve the bat and save the day.

Along the way, much of it on trains, he does battle with the Cubs pitcher and makes some new friends. He meets a girls who teaches him how to keep an eye on the ball when he gets into an apple fight. Her dad plays for a Negro league team and he ends up teaching him a batting stance. All of the traing pays off later in the movie's climax in the final inning of the final game of the World Series. The scene is over the top, but my 10 year-old bought it and was caught up in the whole drama.

Reiner, as Screwie, gets most of the laughs, such as when he gets put in the underwear drawer. Wagner is also good as the Cubs owner who hates Ruth. He is constantly shown destroying and mutilating Babe Ruth bobble heads.

Did they have bobble heads then? Speaking of historical accuracy; in one scene, someone threatens Yankee with the modern politically correct punishment of a "timeout" and Goldberg at one point asks for a mocha chino.

The animation is as good as anything out there and the pace moves along fast enough for the illogical events to not be too thought provoking. If you love baseball, this is the movie for you. If you don't, your kids may still find something to like.