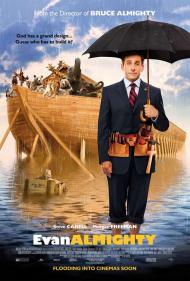 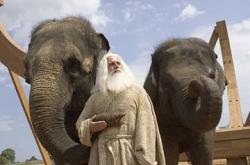 I wasn't that big a fan of Bruce Almighty, but at least that movie contained some funny bits. Evan Almighty doesn't even manage that. It has to be one of the flattest, unfunny comedies that I've seen in a very long time. Honestly, the best I could manage was a weak smile here or there.

This time around, instead of giving his powers away, God is harassing poor Congressman Baxter by forcing him into being Noah and making him build an ark. It's all in a good cause, as it turns out, but in the meantime he humiliates him by forcing him to not only act like Noah, but also look and dress like him. He nearly loses his job, his family and his sanity, but hey, he's God, and everybody knows he works in mysterious ways.

Lately Hollywood can't seem to get away from pushing an over-simplified environmental message and this one is no different. Humanity is evil, spoiling the beautiful valley where Evan lives by their mere presence. (I guess we're only supposed to live in the ugly places of the world.) Also, according to this movie, progress, congressmen and working hard at your job are also all evil. Apparently what's not evil though is accepting a product placement for a gas guzzling Hummer. No big deal normally, but when a movie touts itself as being so environmentally friendly, seeing them show what amounts to a five-second advertisement for one, provided me with the biggest smile I got from this movie.

The cast tries to make the most out of a bad situation, but there's only so much they can do. Carrell is game as the put upon Congressman, but is given so little to work with that there's virtually nothing he can do with the part. Freeman is given next to nothing to do, probably appearing on screen less than 10 minutes in total. As for the other supporting players, the Baxter family is simply bland, Goodman plays an over-the-top stereo-typical congressman, and Wanda Sykes' schtick has grown tired.

You ever notice how watching a good movie makes you feel energized? Well, with me it does. After walking out of this movie, I felt absolutely exhausted.

Since God gave Evan all the wood, the property and a huge crane, why not just send him the big boat?

According to Evan Almighty, God is a liberal Environmentalist? That’s hardly surprising coming from Hollywood, but the fact that they make him a hypocrite as well, just shows how religiously ignorant this movie is.

His point being that “God” merely presents an opportunity to man, who then has the free will to do with it what he wants. In Evan Almighty, “God” does not present Evan with an opportunity. He forces it on him. “God” buys the land next to him. He has the wood delivered to him. He makes his beard grow. He forces him to wear the robe. When Evan prays for a giant, yet ancient, piece of construction equipment, “God” instantly gives it to him. “God” even provides Evan with a book, Ark Building for Dummies. "God" does not allow Evan to prove his faith. He forces it upon him.

None of this crack pot hypocrisy is surprising, considering that the writer, Steve Oedekerk, previously wrote the politically correct screenplay for Barnyard, which featured a Vegan farmer. 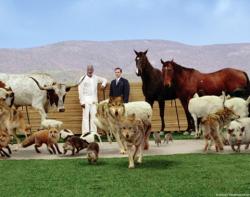 Morgan Freeman as God and Steve Carell as Evan surrounded by animals in Evan Almighty.

The central conceit of this movie is pretty stupid. Why God would force someone to become Noah is never addressed. And anyway, after the first time around didn't God promise he would never flood the Earth again by creating the rainbow as a sign of this covenant with man?

I agree the cast gives this silly storyline a game try. Steve Carell does a decent job filling Jim Carrey's shoes. He can be quite funny but he also brings some pathos to the part. Morgan Freeman is underused as God though and I agree with Eric (did I just write that?) that his divine motivations are inconsistent.

The special effects are quite impressive though, making Evan Almighty the most expensive comedy ever produced at the time of its release. And though many of the group animal shots are CGI the producers actually used an astounding 304 different animal species in the film, ranging alphabetically from Alpaca to Zebu. One interesting fact is that the producers used same sex couples for several of the animal pairs. The elephants were both females as bull elephants can be quite dangerous, while two male giraffes were used.

Perhaps the best thing the movie has going for it are all the little biblical references and other religious background details and symbolism crammed in. When God talks to Evan's wife Joan (of Ark?) at the restaurant his name tag reads “Al Mighty”. How clever. The writers include many other religious references ranging from the sublime to the stupid. God laughing after Evan speaks of his plans being an example of the former, which is a reference to a Yiddish proverb, “Mann traoch, Gott läuch.” Translation: “Man plans, God laughs.” And a good example of the movie's low brow side is the theater marquee shown to be playing a movie called “The 40 Year Old Virgin Mary”.

Evan Almighty received bad reviews and lost money. Apparently God was answering Universal Pictures prayers for cash by showing them how not to make a hit movie. 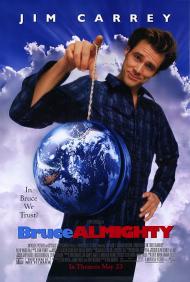