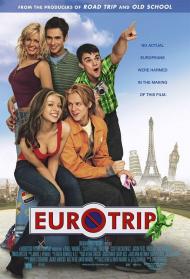 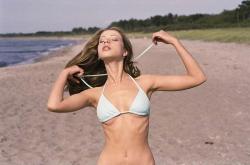 Michelle Trachtenberg looks good in a bikini in Eurotrip.

While it's pleasant to see such a politically incorrect movie in this day and age, it's a pity that the makers of Eurotrip didn't extend their minds beyond mere crudity. For a comedy, this movie is surprisingly unfunny with a tendency to take the least funny jokes and stretch them out way past the point of tolerance.

The setup (I hesitate to call it a plot) is quite simple. After being dumped by his girlfriend on his High School Graduation Day, Scott has a miscommunication with his German Pen Pal. All these years Scott had assumed that his Pen Pal was a man, so that when he receives an e-mail suggesting they hook-up, Scott dashes off an angry reply saying that he never wants to hear from him again. When it turns out that his pen pal is actually a hot German girl, Scott heads for Europe with his doofus sidekick to meet the girl of his dreams. In Paris they are joined by two of their friends, brother and sister Jamie and Jenny (Michelle Trachtenberg of Buffy: The Vampire Slayer) who are vacationing for the summer. The four of them then traipse across Europe, taking the scenic route to reach Berlin, where hopefully Scott will be reunited with his dream girl.

In terms of humor, this movie is crude, and not in a good way. It manages to stereotype every European Nationality imaginable, but it's not even smart enough to be offensive, merely stupid. Like any comedy with enough jokes flung at the screen, some of them do stick. David Hasslehoff makes an amusing cameo, as does Matt Damon. Too many of the other jokes just fall flat though. There is an unfunny moment with a mime in front of the Louvre that stretches on for nearly five minutes, which would have been bad enough, but then the joke is reprised at the end of the film.

The cast is completely cookie cutter bland. Any one of them could have been replaced by any other anonymous teen star working today without making a bit of difference to the movie. Although to be fair, it's hardly their fault, the script, written by the same geniuses that brought us last year's Cat in the Hat, is where the real problems lie. The screenwriters obviously thought, why write a funny joke when you can show a naked ass (or in this case 50 naked asses at once) instead? Although maybe I shouldn't complain about all the nudity, since the bare breasts were about all that kept my attention.

It's possible this movie will please the High School crowd. It will take someone with that level of maturity to be shocked by the onscreen antics. Perhaps the one moment of true shock value that made me laugh was the goose-stepping German boy with the drawn-on Hitler moustache. The rest of the film, while trying to jolt you into laughing, is just mind-numbingly puerile.

If you must see this movie, I suggest a vast intake of alcohol beforehand. It won't make it any funnier, but if you're lucky and drunk enough, you might forget you ever saw it.

Michelle Trachtenberg does look good in a bikini in Eurotrip.

Eurotrip has a few funny moments. Like Scott I laughed at the little blond German boy goose-stepping around the room. Also the song that Matt Damon sings, 'Scotty Doesn't Know' is funny. Later in the movie a dance version of the song is heard playing at a club in Eastern Europe. And it is refreshing to see as much frontal male nudity as female. Unfortunately nearly every gag is telegraphed so far in advance, and as Scott said, worn into the ground, that most of the enjoyment is sucked out of what could have been an original teen sex comedy. And the extreme blandness of the stars certainly doesn't help.

And why is it that every twenty minutes or so the filmmakers feel the need to insert a stereotyped gay person or joke? First there's a joke about Scott being gay because he has an email pal from Germany. This is when he still thinks Mieke is a guy. Apparently just the idea that he might be gay is supposed to elicit a laugh. Then later there is the perverted gay Italian guy on the train. And of course it's supposed to be a laugh riot when Cooper gets sodomized by two huge leather wearing studs in a sex club. Even the suave Eurotrash guy who hits on Jenny tells her that he also 'sleeps with men'. How hilarious.

Here are a few examples of how predictable the movie is. When they first arrive in London and go into a pub for a drink, they are immediately surrounded by a threatening looking team of soccer players. Hmm, I wonder if they will end up getting trashed together and being friends? Later the guys run excitedly up a hill towards a nude beach. Hmm, I wonder if it is going to be full of just naked men? They visit the Vatican. Hmm, I wonder if one of the guys will be mistaken for the Pope? If you don't already know the answers to these questions then by all means rush out to see Eurotrip, you must, after all, be its target audience.

Did we mention that Michelle Trachtenberg wears a bikini in Eurotrip?

Eurotrip is certainly as dimwitted and offensive as my brothers write. However, I caught myself occasionally laughing and cringing.

I busted a gut when the two American boys are faced with the drunken, rowdy, British soccer fans. They demand that the Americans sing the Manchester United fight song. The Americans don't have a clue so they sing Sheena Easton's hit Morning Train. Within minutes they are all getting drunk together singing it. It is such a chick song, that I found it hilarious that these tough guys knew all the words. One fan tells the boys, "So I tell the swamp donkey to sock it before I give her a trunky in the tradesman's entrance and have her lick me yarbles!" To which Cooper responds, "Wow. You guys are on like a completely different level of swearing over here."

This movie has one of the grossest scenes I have ever seen. Picture it, dozens of over weight naked old guys; penises are bouncing and fat hairy asses are mooning every one. Eeeeeewwww! I have never been more motivated to work out in my life.

So the movie has a couple of memorable moments. The ending, though, sucks. He finds her and they live happily ever after. Yawn. It should have ended with him finding her only to discover that in fact it really was a man after all.