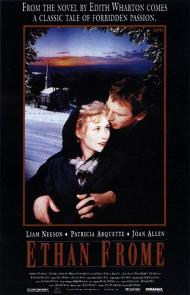 If I had to sum up the movie Ethan Frome in a word that word would be bleak. It is set in a small New England town in the early 20th Century. It begins with the arrival of the town's new preacher. As he departs the train he notices a lame figure struggling through the snow. He soon learns that this man, Ethan Frome, is the town pariah. Disturbed by the townspeople's attitude towards this man he makes it his mission to get to know him and help him in any way he can. The majority of the movie is then told in flashback to events that took place some 20-odd years before.

The entire movie is set in winter. It is shot in muted gray colors and features a small cast of actors. It was based on the 1911 Edith Wharton novel. Liam Neeson plays the title character. He is a simple man living with his invalid mother. A distant cousin named Zeena (Joan Allen) comes to live with them to care for his mother. Upon his mother's death Ethan marries Zeena. It is a marriage of convenience rather than passion.

It turns out that Zeena is far from healthy herself. Eventually she invites a relative to come and stay with them to help out much as she had helped out with Ethan's mother. Mattie (Patricia Arquette) is a cheerful young woman who falls almost immediately for Ethan. At this point it's pretty obvious where the story is heading. One thing I liked about the movie was the straightforward manner in which it unfolds. There are no distracting subplots to get in the way.

If this movie were set today it would have a simple outcome. But in this those days society was much more rigidly structured. Ethan and Mattie must be punished for their sins. The ending, without giving it away, is about as ironic as endings get. There's a twist to it but it's as bleak a twist as any you are likely to see.

The talented cast keeps your attention even as the depressing ending is a foregone conclusion. Neeson makes you feel the yearning and frustration Ethan feels in a less than satisfactory marriage. Arquette has never been more appealing. Allen, ostensibly the villain of the piece, manages to evoke sympathy.

Ethan Frome is a beautifully acted morality play. Oh and did I mention it's bleak?

As the movie begins, we meet the popular new minister, Reverend Smith. He is the most eligible bachelor in town, being surrounded by a gaggle of girls at a party. As Patrick noted, Ethan Frome is the polar opposite, being ignored by all who see him. This sparks the Reverend’s, and the audience’s, curiosity as to why.

Through a flashback, we meet Ethan, a man burdened by family responsibility. His mother is ill and then his wife as well, forcing him to stay on the farm where they live. Ethan reads books and quietly dreams of travel. He reminded me of George Bailey. Like the hero of Bedford Falls, Ethan’s wants are never considered until Mattie becomes their live in nurse maid. Through her, Ethan finally finds someone uncomplicated, at least that is, until he falls in love with her.

Ethan has never truly known such easy contentment as he experiences with Mattie. As Zeena is constantly ill, it is obvious why Mattie sparks feelings in him but as a married man, he is no longer morally allowed such moments of tranquility, at least not ones created by another woman. What is a married man to do with a wife who coughs all day and likes to discuss illnesses at dinner, especially when he can compare her to the attractive nurse who sings sweetly during dinner.

One mistake in the movie is that it is told in flashback by a woman who occasionally spent time with Zeena. She could not possibly know what happened in those intimate moments Ethan and Mattie share. It is more of a flaw in the film making than the actual love story itself. Their relationship would have been more gossip and rumor than known facts.

Watching this film in July was very refreshing. It made this turn of the century, snow covered setting seem very romantic. It is a Currier and Ives painting come to life. What else was there to do in the winter, without electricity, but fall in love? Look at the sledding scene where Ethan and Mattie sit in the snow and Mattie asks, “If I miss my train, where will I go?” and Ethan responds, “Where are you going if you catch it?” (See the picture in Patrick's review)

Patrick called this movie bleak, while I call it sad. Ethan only briefly knows happiness at the hands of another woman. It is a feeling he is not allowed to experience and thus his marriage is nothing more than a prison sentence of misery. Yes, Ethan broke his marriage vows but does not a loveless marriage void such a contract? Some may answer yes, while others no. Either way, Ethan Frome may challenge your thinking and feelings on the subject.