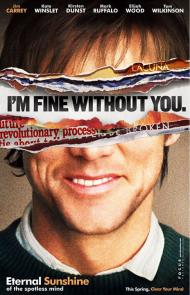 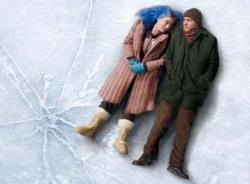 Kate Winslet and Jim Carrey in Eternal Sunshine of the Spotless Mind.

Eternal Sunshine of the Spotless Mind is a modern day love story with a science/fiction twist. It begins on Valentine's Day, 2004 on Long Island. We meet Joel (Jim Carrey with two days worth of razor stubble) as he begins his day. He feels quite strange and detached this morning. It isn't just that his car has a big scratch on one side and that many pages of his journal have been torn out. No, it's more than that. He can't quite explain it but at any rate he seems to be in a funk about something. At the train station he impulsively decides to skip work and instead heads out to Montauk to the beach even though it is snowy and bitterly cold. Once there he meets a young woman named Clementine (Kate Winslet with blue hair), the only other person on that frozen beach that day, and they begin a tentative relationship. Things seem to be going fine for a few days when suddenly we crash into the opening credits and the movie immediately changes gears.

You see Joel and Clementine have actually been a couple for the past two years. They don't recognize each other because they have both had the other person erased from their memory. Through an interesting mix of flashbacks and montages where we are sometimes inside Joel's memories it is revealed that Clementine was dissatisfied with their relationship and on a whim paid money to a company whose sole funtion is to remove unwanted memories from people's brains. Once Joel discovers what Clementine has done he decides to undergo the same procedure in order to forget her. A good part of the movie concerns the night during which Joel's memories of Clementine are being eradicated. Joel, not really wanting to forget Clementine, begins trying to hide memories of her behind other, deeper memories. This allows for some funny and original moments such as Joel cringing under the table as a four year old in his mom's old kitchen while Clementine plays the part of one of his mom's friends complete with a kitschy 60's dress on. The only problem I had with this part of the movie was that we already know that Joel's memory gets erased. And while these scenes are amusing this knowledge takes all the tension out of watching Joel and Clementine being chased through his childhood memories.

The subplot involving the Dr., his secretary and his staff of computer geek technicians provides more laughs and also raises some ethical questions, but this being at its core a romantic comedy, things never get all that heavy. Tom Wilkinson, Kirsten Dunst, Elijah Wood and Mark Ruffalo are all good. And while I did enjoy this movie and recommend it, I was dissappointed with it at the same time. Charlie Kaufman (arguably the most talented screen-writer working today) has written a fascinating script but the way the movie plays out feels a bit anticlimactic. It is certainly not the fault of the two leads. Jim Carrey has created his most fully developed character with Joel. He is about as average a guy as you could imagine. And Kate Winslet is particularly appealing as the vulnerable, free-spirited Clementine.

As funny, quirky, touching and original as Eternal Sunshine of the Spotless Mind is, Charlie Kaufman has yet to write his masterwork. 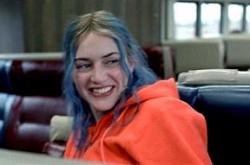 Kate Winslet in Eternal Sunshine of the Spotless Mind.

Saying that this movie is not Charlie Kaufman's masterwork is high praise indeed since there are a great many screenwriters who would love to have written anything this good. It is as Patrick wrote, funny, quirky and touching. As with all Kaufman's work, it is also tinged with sadness, as the message of this movie is that love inevitably dims with the passage of time. What keeps it from being completely depressing is the entertaining way that he gets that message across.

It's a little early to put forth Oscar contenders, but that is the caliber of performances that this film's leads provide. Carrey is funny, but without ever resorting to his over the top antics that serve him so well in his more mainstream films. For once, it is the dialogue that makes him funny, and not just Carrey being Carrey. And Winslet too, delivers a coup de grace performance with an impeccable American accent. Oscar voters generally have a short memory, but I only hope these two are not completely forgotten come next year's award season.

I do disagree with Patrick's comments on the tension in this movie. I don't really think the intent was for the audience to be on the edge of their seat wondering whether or not Joel was able to retain his memories. I think the intention was to both provide humor, and to explore the relationship between Joel and Clementine. Also, given that Joel and Clementine do meet again on the beach where they first met, who's to say that they truly did forget everything? 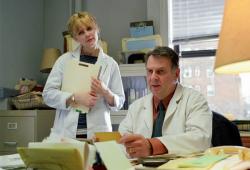 Kristen Dunst and Tom Wilkinson in Eternal Sunshine of the Spotless Mind.

The message of this film is not that; "...love inevitably dims with the passage of time." That is the message in The Way We Were.

The message in this movie is that love is not a memory; it is a feeling. These two people have their memories erased yet still find each other again and have the same feelings. To further state this message, the movie has the side plot with the doctor and his receptionist. She had her memories erased yet she still develops the same feelings she had before. Your brain may forget but your heart does not.

This film is worth a watch but is hardly a four star movie. Kaufman is a completely overrated writer. His movies seem like he has more fun writing them than people do watching them. He is creative and imaginative, but so what? Watching a subdued Jim Carey for two hours is hardly entertaining.