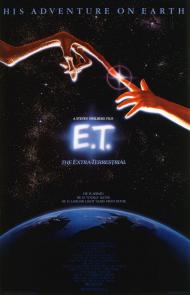 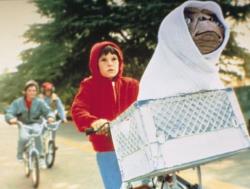 Henry Thomas in E.T.: The Extra-Terrestrial.

Until seeing this re-release, I hadn't re-watched E.T. since the two times I saw it in the theater in 1982. This puts me in a unique perspective to review this movie. It means that I don't think I would have known what the new scenes were without having been told, and it allows me to compare how I saw it as a child to how I saw it as an adult without the influence of having seen it during the intervening years.

First, just to get it out of the way, E.T. is the story of a small alien who is left behind on Earth when the spaceship he is on takes off without him. He is found and befriended by a small boy named Elliot with whom he shares a physical and emotional connection. With Elliot's and Elliot's brother and sister's help, E.T. constructs a communications device to call to his ship. Before the ship arrives to pick him up however, E.T., who seems unable to survive without others of his kind around, becomes sick and starts to die. Scientists, who have been tracking E.T. arrive at Elliot's house, just in time to watch E.T. 'die'. He survives of course, and Elliot, with help from his family and friends, returns E.T. to his ship and the boy and the alien say an emotional good-bye.

I tell the whole plot here, because, I mean come on, who doesn't know it already? It's a simple beautiful story about loneliness, friendship, and the bittersweet pangs of childhood. Themes which seem prevalent in many of Spielberg's movies, and never done as well by him again, as they are in this movie.

The most striking difference I found in watching this movie then and now, is that then I found the children and the times not quite right. They were supposed to be representing the children of the early 1980s. They play a game of something almost exactly like Dungeons & Dragons, they yell 'penis breath', and 'zero charisma' at each other. At the time, when I was a real child of the eighties, I found them unrealistic and contrived. Now, looking back of course, I found nothing but nostalgia in watching them, because really they are close enough to represent how we were as kids back then, to make me slightly wistful of those days gone by.

Of this new version and the enhanced special effects, I will say this. They aren't un-noticeable as some have claimed. CGI effects are always noticeable no matter how well they are done, at least at this stage of technological development. They lack a certain texture and depth that you find in real-world objects. It's easy to see when E.T.'s face has been enhanced or his body movements increased. These changes are however, unobtrusive. They do not detract or distract from the story or the movie as a whole. Neither do they increase the enjoyment of the movie, which is really about emotion and not special effects.

I'm not a huge fan of Spielberg, at least not of his recent movies. His early work, of which this is a great example, I do enjoy. Jaws, Close Encounters of the Third Kind, E.T., and Raiders of the Lost Ark, are all great movies and will stand in my opinion as his best work.

Sweet and emotional, E.T is a movie I enjoyed as a child, and still do, twenty years later. 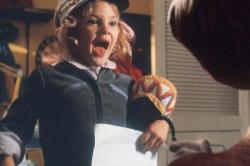 Drew Barrymore in E.T.: The Extra-Terrestrial.

Spielberg's masterpiece is one of the greatest achievements in imagination ever put on film. The simplicity of the storyline and the ingeniousness of the E.T. character create a powerful combination. What small child has never fantasized about having their very own special friend? Especially one as magical and unique as this lovable, stranded space alien.

E.T. The Extra-Terrestrial is, as Scott mentioned, the story of Elliot, a young boy who discovers and befriends a lost creature from another planet. Along with his older brother and baby sister, Elliot helps 'E.T.' escape from scientific authorities and find a way home. Along the way there are moments of humor as E.T. makes discoveries about this world and the children learn things about him; moments of sadness when E.T. becomes deathly ill and is captured by the scientists; and a thrilling chase sequence that will have you cheering along.

Throughout the movie there is a consistent theme of the world through the eyes of a child. Most obviously in the scene where the space-suited scientists surround the house and menacingly enter it.

In many ways E.T. is the inverse of that other great children's movie The Wizard of Oz. Whereas in the Judy Garland classic the child travels to the magic world, in E.T. the magic world comes to the child in the form of the alien. The goodbye scenes at the end of both movies are remarkably similar.

Now that many years have passed since I first watched this movie there is an element of nostalgia associated with it. Anyone who played Dungeons and Dragons during the eighties will surely feel a tug of memory. Also the scene where Elliot names all of his Star Wars action figures for E.T. 'This is Hammerhead and this is Boba Fett.'

There's no denying that E.T. The Extra-Terrestrial is a classic for the ages. The image of Elliot and E.T. flying on a bicycle against a gigantic moon is forever etched into our public consciousness. 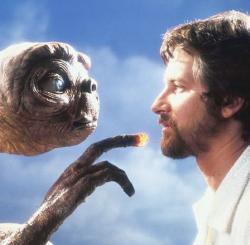 Steven Spielberg and his alien creation in E.T.: The Extra-Terrestrial.

Forget the overrated Schindler's List. E.T. is Spielberg's true masterpiece. Any director could use the subject of the holocaust and drag some emotion from the audience. It's a given. How many could get an audience to cry over a 'dying' robotic, puppet?

The genius and wonder of E.T. is that Spielberg creates a character that is obviously not real. However, he draws the audience in so well that you care for him as much as you do the children. When I first saw this film 20 years ago, half the audience was in tears during E.T.'s death scene. It was a rubber costume lying on a gurney and people were blubbering all over themselves. That is masterful direction!

In this new version Spielberg has added a scene and done some special effects editing. All changes are totally unnecessary. New computer graphics better detail E.T.'s emotions? Apparently they worked the first time around as evident by all the tissue use in the theaters. One could argue that Spielberg is a perfectionist and thus wanted to perfect it. How do you perfect something that is perfect already?

One annoying change that the ever politically wannabe correct Spielberg made was the loss of guns. The government agents now all sport walkie-talkies instead of guns. He had them computerized out and changed. It's a good thing Spielberg didn't direct A Christmas Story or Ralphie would be desperately looking for a Red Rider teddy bear instead of a BB gun.

E.T. is not an original story. Does anyone remember Old Yeller? Other than Henry Thomas who plays Eliot, the acting is nothing above average. The special effects never dominate any scenes. What makes this movie great was Spielberg's way of allowing us to see these children in all of their vulnerabilities and genuinely care for them. The oldest brother is at that awkward stage of trying to become a man without a father around. Eliot is likewise fatherless, and apparently a loner. He hangs around his brothers group. Eliot is the neglected middle child who needs some attention. Who can't relate, in some way, to these characters?

Spielberg can redo the special effects all he wants. The core of this film has nothing to do with special effects. This is a heart and soul movie that just happens to have a Sci-Fi angle.