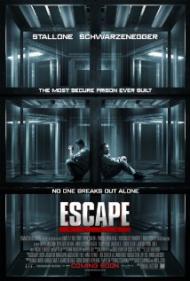 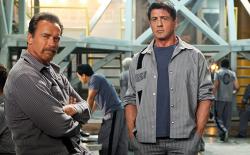 Arnold Schwarzenegger and Sylvester Stallone team up 20 years too late in Escape Plan.

If you are going to make an action movie starring senior citizens (Sylvester Stallone is 67 and Arnold Schwarzenegger a year younger) then you need to keep your tongue firmly in cheek. The main problem with Escape Plan is that it is played far too straight. In particular, Stallone doesn't seem to get just how ludicrous it all is. As for the former Governor of California, Arnold at least, seems to be in on the joke but the script doesn't give him as much to do. Clearly this is Stallone's movie.

He plays Ray Breslin, a man who makes his living breaking out of maximum security prisons. Later on in the movie, in a scene of hopelessly misplaced melodrama, we learn what motivates him. He lost a wife and son to an escaped convict that Breslin (in his former career as a prosecutor) put behind bars. Now he devotes his life to making sure no one else ever breaks out of prison.

Breslin takes a job offer from the CIA to test a top-secret prison. But of course things go awry when he finds himself trapped in the prison by the crooked warden who was paid 5 million bucks to ensure Breslin never again sees the light of day (just why someone is so desperate to keep him locked up is never fully explained, except that Breslin is just too good at his job). Enter Emil Rottmayer (Schwarzenegger) a mysterious inmate who befriends Breslin and together they set about making their Escape Plan.

While there are some elements of this movie that provide entertainment it could have been so much more fun. Everyone but Schwarzenegger (and Vinnie Jones as a sadistic prison guard) plays it too seriously. Stallone is the worst culprit. Even when employing such ridiculous plot devices as escaping through an aluminum panel in his cell by using a piece of metal to reflect light and heat up the steal screws to loosen them, or using a pen and other simple objects to form a makeshift sextant to get the ship's coordinates (oh yeah, the prison is on a huge cargo ship at sea) he keeps a completely straight face.

There are a couple of scenes of levity but they are few and far between. In one instance Breslin and Rottmayer give the masked prison guards humorous nicknames. But for the most part the mood is dreary and bleak and even the color scheme used by director Mikael Håfström is muted and monotone. Arnold has one great moment at the climax where he picks up an assault rifle and begins mowing down prison guards and there are a few minor surprises revealed at the end. But these 2 aging action heroes deserve better. 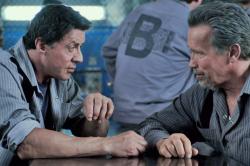 Based on the previews, the best I was hoping for was that this movie would be so cheesily bad that it would be entertaining. Unfortunately, as Patrick wrote, the makers of this film went a different way. They decided to make a drama with only the minimal amount of humor, most of it provided by Arnold.

There were plans for Stallone and Schwarzenegger to star together in a movie as far back as the 1980s, but their schedules never opened up at the same time when an appropriate project was available. They've since appeared in The Expendables together, but Schwarzenegger's part in those films was very much a minor one. Here, although Arnold is the supporting player, he can be said to be a true co-star. In the 1980s, a movie starring the two of them would possibly have been the biggest movie of the year. It would certainly be an Event movie with a capital "E", something akin to Superman and Spider-man appearing in the same movie. Now, many, many years past these two stars sell-by date, this meager offering is the best they can provide and it's not even a happening, let alone an event.

Arnold does come out slightly better than Stallone, who is in full-on serious mode. Patrick mentioned the moment when Arnold picks up a massive gun from its tripod and mans it like a rifle. This is the one moment that feels like what we anticipated the movie would feel like. He also has a few other lighthearted moments, such as when Stallone short circuits the security cameras and just before it goes down, Arnold gives a big grin and a thumbs up to the camera. He really does seem to be in on the fact that this is a bad movie, where Stallone is striving to deliver a serious performance.

It hardly seems worth pointing out, but the plot is riddled with holes. Patrick pointed out many of them. One big one comes at the film's climax when Stallone's character suddenly knows everything there is to know about ships, including the fact that they will flush their water tanks when the engines restart. There are many other such moments and implausible coincidences that contribute to the general dullness of the film.

Although Stallone and Schwarzenegger are both past their prime, with the right script and director, they could still make a decent action movie together. This just isn't that movie. 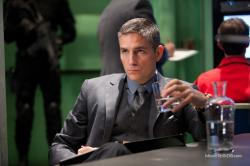 As Scott wrote, this would have been quite the billing had these two has-beens made this film 20-30 years ago. It was like Buster Keaton and Charlie Chaplin appearing together in Limelight in 1952 instead of 30 years earlier when both were at the heights of their careers. It is nice to see them together as a curiosity but oh, what could have been?

I agree with my brothers that Stallone plays it so straight that he is boring. Arnold does fair better but this poor script and lackluster dialogue never really allows them to create an exciting team. Their best moment together is sadly enough when Arnold says, “You don’t look that smart.” and Stallone responds, “You don’t either.”

Arnold actually does some decent acting when he is in the hole and yammers on in German. He is worked up and upset as he yells in his native language. That is likely why he is actually convincing when he distraughtly recites The Lord’s Prayer. Had he done it in English his accent would have greatly reduced the seriousness of the moment.

With his cold stare, James Caviezel makes a decent “villain”. I wonder if Caviezel only chooses film roles that reference God in some way. Here he plays God of the prison and after a dying prisoner says in a foreign language, “God is great.” Caviezel responds, “Yeah, whatever.” And then shoots the prisoner.

Although neither of these old farts is ever going to win an acting award, their seniority and box office history should earn them, as Patrick wrote, a better project. If such very powerful and wealthy people want Breslin and Rottmayer to never see the light of day again, why not just have them killed?

I never really felt sorry for either man. Breslin gets put into prisons for a living so this is just another day at the office for him. When trying to escape, Rottmayer kills many innocent guards who are just trying to put down a prison riot. The guards had nothing to do with any wrong committed against him. They are more of a victim than him. They die merely doing a job they think to be completely legal.

This is the type of film that once you start to question the rational of it all you cannot stop. How could such a prison be built and put into use without anyone knowing about it? All of the inmates and guards have family and friends who would have talked. Prisoners would get visitors and guards would have days off. I sooner believe a past his prime middle-aged moron could win heavy weight boxing champion of the world. Hell, a killer robot returning from the future to kill someone’s mom makes more sense.