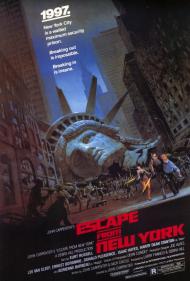 Escape from New York is one of those movies I enjoyed as a kid that hasn’t aged particularly well. What I remembered as brutal violence now seems unintentionally cartoonish with fake looking blood. The motley assortment of hardened criminals that make up New York City’s prison population are about as scary as a Halloween episode of Glee.

Adding to the dated quality of the movie is the fact that it opens with the following narration, which also serves as the necessary exposition for setting up the story. Voice-Over: “In 1988, the crime rate in the United States rises four hundred percent. The once great city of New York becomes the one maximum security prison for the entire country. A fifty-foot containment wall is erected along the New Jersey shoreline, across the Harlem River, and down along the Brooklyn shoreline. It completely surrounds Manhattan Island. All bridges and waterways are mined. The United States Police Force, like an army, is encamped around the island. There are no guards inside the prison, only prisoners and the worlds they have made. The rules are simple: once you go in, you don't come out.” This movie was released in 1981, a mere 7 years before Manhattan Island was supposedly turned into the nation’s only federal prison. The story itself is set 9 years later in 1997.

Kurt Russell hams his way through the movie as the eye-patch wearing Snake Plissken. He growls out his lines and struts around in skintight jeans acting tough. When Air Force One goes down in the prison city, with the President on board, Snake is sent in after him. He has 24 hours to rescue the leader of the free world before a self-destruct implant Snake’s been injected with goes off. Adding to the urgency is the fact that the President is handcuffed to a briefcase carrying a highly sensitive cassette tape needed for an important summit meeting with the leaders of Russia and China.

Everyone in the cast is playing to the back role. Old timers Ernest Borgnine (as Cabbie a taxi driving prisoner) and Lee Van Cleef (as the man that sends Snake on his seemingly impossible mission) both give their all and seem to be aware of the inherent cheesiness of the plot. Donald Pleasence (as the President), Harry Dean Stanton (as a prisoner called Brain) and Isaac Hayes (as prison leader The Duke) all play it very straight without a hint of irony. Adrienne Barbeau (as Brain’s busty girlfriend) gives a performance that is alternately earnest and tongue-in-cheek.

It’s worth noting that with the exception of a few establishing shots of the Statue of Liberty and downtown Manhattan none of Escape from New York was filmed in the Big Apple. A burned out neighborhood in East St. Louis acted as stand in for the decrepit streets of Manhattan as a maximum security prison.

The three automobiles used in the movie have become somewhat iconic. Cabbie’s Checker Cab ringed with wire mesh caging, the Ford station wagon - also with guarded windshield and side windows - that Snake steals, and especially The Duke’s Cadillac with chandeliers mounted on the two front fenders. The story may take place in 1997 but these cars positively scream 1970s.

Escape from New York still has some entertainment value as a campy cult classic. Anyone expecting a tense action flick, however, will be sorely disappointed. 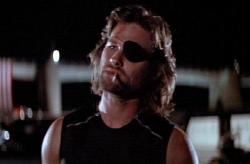 Kurt Russell as Snake Plissken in Escape from New York.

I suppose that in 1981, with crime rates climbing and the middle class fleeing for the suburbs, it was easier to imagine that New York City would be left to the cockroaches and the criminals. Watching this movie now though, it does seem odd that turning the most valuable real estate in the country into a maximum security prison seems like a good idea. Certainly it seems strange that the writers thought, and the audiences accepted, that this could all happen in just six years.

As Patrick wrote, almost none of the movie was filmed in New York City. This was mainly due to budgetary constraints, but it kills some potential fun. Part of the enjoyment of watching a movie set in the ruins of a big city is seeing famous landmarks in a state of decay. Here the only recognizable buildings are the World Trade Center Towers, on whose roof Snake lands his plane. They don't even attempt to fake it. At one point they drive up Broadway and they visit the Public Library, but they in no way resemble the real thing. I should also point out that the movie poster, which shows the head of the Statue of Liberty lying in the middle of the street, bears no relation to anything that happens in the movie, where the Statue of Liberty is intact.

Of the cast, Ernest Borgnine seems to be one of the only actors who manages to capture the correct tone. Everyone else plays it far too serious. Kurt Russell never comes off as tough as he's trying to be. He sounds as if he's doing a bad Clint Eastwood imitation. His eye patch is the most memorable thing about him. Lee Van Cleef does a decent enough job, but the rest are lackluster.

The villains do come off more campy than threatening, but without enough sense of fun. Isaac Hayes should really have gone over the top as the Duke. It's the lack of fun that is for me, the movie's biggest weakness. The concept is outlandish, but the execution is too dull to really take advantage of it.

This is one of those movies that has a cult following, but I have to wonder how many people who enjoy it, are really doing it at least part out of a sense of nostalgia. They have fond memories of it as a kid and so are kinder to it as an adult. If looked at objectively, it's really not that good. 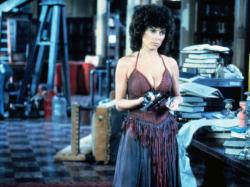 Here is what you must decide when watching Escape from New York. Is Kurt Russell playing his role for laughs or is he serious? As my brothers wrote, his Snake Plissken is nothing more than a hammy Clint Eastwood impersonation with an eye patch. I have always found Russell to be a serviceable actor but never too exciting of one. Bland is his stock and trade. He fared better in Big Trouble in Little China (1986) where he was in on the joke and not the unintentional punch line.

Adrienne Barbeau was married to John Carpenter at the time this film was made. Barbeau was not an outright good looking woman. Her face was not soft, appearing a tad masculine. However, from the neck down, she was all woman, with breasts big enough to build a career on. Carpenter exploited his wife’s greatest talents in their films together. She did a nude scene for the foreign release version of Swamp Thing (1982). Her best scene here is when she walks away from the library in a low cut evening gown. Her breasts jiggle with her every step and she thankfully never closes the coat she wears over her dress the entire film.

Escape from New York may be campy and ridiculous but the pacing never lets up, giving you little time to wonder about such things as how they feed these people or why they bother to keep them alive at all considering that no one who goes in, ever returns. Seriously, if all of these convicts have life sentences, what is the point of keeping them alive? They have no contact with the outside world anyway so who exactly would know if they were alive or not. The pace was not enough however, to keep me from thinking about the politics.

The president is clearly abducted by a liberal/communist terrorist. The female hijacker rants, “Tell this to the workers when they ask where their leader went. We, the soldiers of The National Liberation Front of America, in the name of the workers and all the oppressed of this imperialist country, have struck a fatal blow to the fascist police state…” Liberals like to think they are speaking for the working class, and often refer to people proud of their country as imperialists and fascists. It truly dates this 1981 film that a communist abducts the President of the United States in 1997 while in 2008 the United Stated elected a communist President. Where is Snake Plissken now that we need him to rescue us from a communist?