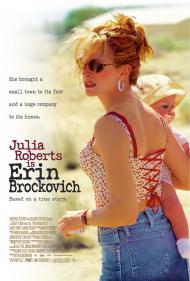 Although she dresses like someone who screws people for money, Erin Brockovich made alot of money because someone else screwed some people.

In Hollywood terms, one of the most admirable things a woman can do is to become a single mother. The best example of this is Erin Brockovich. In this film, Roberts plays a twice divorced mother of three. She struggles to find a job and is constantly going on about how hard her life is. “I don't need pity, I need a paycheck. And I've looked. But when you've spent the past six years raising babies its real hard to find somebody who pays worth a damn...” On the DVD Roberts is quoted as saying that single mothers, “...are the heroes of our time.”  As if there were never single mothers before.

I am not going to diminish just how difficult it is to raise children, and I am certainly not trying to insult any widowed mother, but this film makes Brockovich a hero just by her virtue of making bad decisions.  She is not a victim of society but a victim of her own lousy choices. It never mentions any government assistance that Brockovich received. It leads you to believe that she did everything without ever getting a dime from an ex husband or the government. How do I know if she did or didn't? Because this movie is so eager to make Erin Brockovich a saint that had she actually done it all without any government handout the plot would have made sure to make all kinds of references to that.

Erin Brockovich pushes her way into a job at a Law Firm and stumbles across a case that is not getting much attention. She investigates the case of a big business contaminating an entire community's water supply. She is successful at her job by virtue of not taking “no” for an answer and her willingness to flirt with someone, while wearing her streetwalker looking clothes, to get her way. She became very personable to the victims, treating them with respect. They were able to trust her in ways that they never could a suit wearing lawyer. Brockovich is an admirable character, but it has nothing to do with her being a single mother. She learned on the job and helped to right a huge wrong. “Look, I don't know shit about shit but I know right from wrong!” She yells at one point.

No doubt Brockovich had some emotional investment in this case, but the final scene of the movie knocks Brockovich light years from sainthood. From the 300 and some million dollar settlement, she took home a 2 million dollar bonus, plus her normal salary. A true hero would not financially benefit from the death and disease of hundreds of people. Her accepting that check makes her just as bad as the business that was polluting the water in the first place. That business made money while poisoning people. Brockovich made money because they were poisoned. She benefited from their misfortune. Some of the families poisoned by that business received less than she did from the settlement when the money was divided up.

Erin Brockovich, wants you to see her as a courageous, hard working single mother, motivated by doing the right thing. I saw her as someone who made several poor decisions in her life and then became an enthusiastic opportunist when she saw a way of making good money for herself and her kids. It was only that the path to that money involved her getting personal with a bunch of unfortunate people that looked at her admirably. 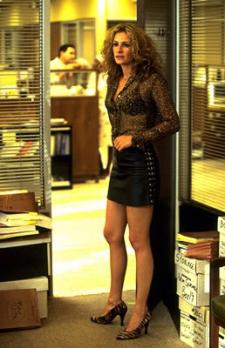 Why would anyone assume anything about someone who wears a see-through top to work?

Eric, I read your review before watching this movie and I couldn't help but think going in that you were letting your pet peeve toward single mother's influence your opinion. Having watched it now, I can say that I see many of your points and I agree with quite a few of them.

I can't say that the single mother angle really bothered me, but I didn't really like Erin's attitude in general. She's a bitch on several occasions and she dresses like a hooker, over-expressing her right to dress that way on several occasions, but then acting as if she shouldn't be judged for doing it. Well I'm certainly not going to stop anyone from dressing any way they want, but if she thinks people aren't going to judge her because of it, she's crazy. And let's face it, maybe her attitude and her dress sense are what keep her from getting a job and not the fact that she has three kids. Also, she bitches and moans about not being able to pay her bills throughout the movie and yet you never see her in the same hooker clothes twice, so apparently buying new clothes isn't a problem. From the way she dressed, I actually thought she was playing the same character from Pretty Woman and Richard Gere was her ex-husband and all he'd left her was her old wardrobe.

I don't know that I agree with you Eric that Erin and Ed should have taken the case for nothing, but 40% is nothing short of robbery. They should have taken enough to recoup their costs, but I'd have considered 5, maybe 10, percent of the settlement more than adequate as a payment. I mean, 5% would have been approximately $15 million. The movie only mentions the settlement amount for one family and they're given $5 million. What it doesn't mention is that the average amount awarded was $300 thousand per family. Erin herself took home $2 million. That's not altruism. That's cold-hard capitalism.

Julia Roberts has always been over-rated as an actress. I can't believe she won an Oscar for this part and I truly can't believe that the movie was nominated for Best Picture. Sure, Roberts has charm, but to quote her line in Notting Hill, "One day my looks will go and they will realize that I can't act." Since those are my feelings towards her and this entire movie hinges on the idea that the audience like her, you can see where my problem lies.

Just about the only thing I enjoyed was Albert Finney as the lawyer Ed Masry. I wish that his part had been the lead and Roberts' part merely supporting.

Along with my other complaints, I also have to say that it runs too long. A movie this predictable shouldn't be over 2 hours long. There are no plot twists to keep you guessing. It plays out strictly by the numbers.

Eric, I apologize for doubting you.

This movie doesn't glamorize single motherhood. On the contrary, it shows how difficult it is to raise children while holding down a full time job. Without the support of George (Aaron Eckhart) Erin would have had a much harder time dedicating herself to the case. Eric complained the movie tries to canonize Brockovich.  I disagree. The way she treats George, taking him completely for granted, is most definitely not saint-like behavior. And her second husband, the one that walked out on Brockovich and the kids, is equally to blame for her predicament. It isn't just a matter of her making “bad decisions”.

I can't believe anyone would compare the lawyers in this case to the company that caused the deaths of some of its own customers and poisoned hundreds of others. Even if you don't feel Brockovich was entitled to two million dollars of the settlement, how is that morally comparable to the company's gross negligence? And they did tell these people - none of whom would have gotten a dime otherwise - that their fee was 40%, before taking on the case.

The reason this movie was a critical and financial success was because, unlike my brothers, most people identified with Brockovich and these poor citizens battling against Big Business. This is a classic cheer along movie! The American Film Institute ranked it at #73 on their list of the 100 Greatest Movie Cheers and the character of Erin Brockovich made #31 on their list of Greatest Movie Heroes. Who gives a rat's ass how the woman dresses? I applaud her attitude. She's proud of her body and uses it when she needs to. As she so succinctly puts it, “They’re called boobs, Ed.” So what? Is it her fault some men are so easily manipulated by the sight of a nice rack?

At no point in the movie does she act as if she's surprised that others judge her by her appearance. When Ed tells her that some of the other women in the office have a problem with how she dresses she simply responds that she likes how she looks. She then turns the tables by telling Ed he should rethink his ties.

It's easy to see why Julia Roberts was attracted to this role. It's a great part and she's outstanding in it. She's smart, courageous and sexy, and she dominates the entire movie. And she gets to deliver some great lines... “That's all you got, lady. Two wrong feet in fucking ugly shoes.” “Bite my ass, Krispy Kreme!” and “So before you come back here with another lame ass offer, I want you to think real hard about what your spine is worth, Mr. Walker. Or what you might expect someone to pay you for your uterus, Ms. Sanchez. Then you take out your calculator and you multiply that number by a hundred. Anything less than that is a waste of our time.”

The only thing I agree with either of my brothers about is the fact that Albert Finney is great as Erin's boss Ed Masry. He and Roberts make a classic movie team.  In conclusion, Erin Brockovich is a far better movie than Eric and Scott would have you believe.