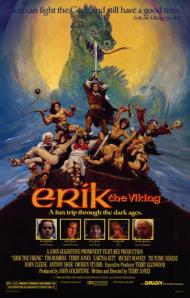 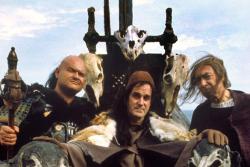 John Cleese as Halfdan the Black in Erik the Viking.

Of all the members of Monty Python, Terry Jones has had the lowest profile solo career. Although he's written books, narrated television programs, and worked on a variety of other projects, he is the only member who never headlined his own movie. His most prominent work outside of the group has been as a director, with Erik the Viking being his biggest production to date. Although it wasn't very well received upon its release, it's worth taking a second look at these 25 years later, particularly following a re-edited and shortened version that was released in 2007, known as the Director's Son's Cut since the project was headed by Bill Jones, Terry's son.

The title of the film is taken from the title of a children's book written by Jones, although the plots have nothing in common. Erik is played by Tim Robbins. When one day during a typical Viking attack on a village, Erik almost rapes a woman (Samantha Bond), but is unable to perform and begins to question the endless cycle of rape and pillage that his life has been reduced to. After the attack, he visits Freya (Eartha Kitt), an old wise woman who advises him that the only way to bring an end to this era of bloodshed is to seek out the Horn Resounding, which can awaken the gods when blown. Gathering a group of Viking warriors together, Erik sets out to do just that. Working against him is Loki, a blacksmith's assistant, who sees his livelihood slipping away if death and bloodshed should go by the wayside. He contacts Halfdan the Black (John Cleese), who likewise would suffer if war should end and he too works to stop Erik. Along the the way Erik meets King Arnulf (played by Terry Jones) and his daughter Aud (Imogen Stubbs), who Erik begins to fall in love with.

The original cut of the film was close to two hours in length. It was clearly an expensive production and it was as if the producers wanted to make sure their money's worth showed up on screen. This gave the story an uneven tone as it ranged from action to comedy. However, because of the zanier comic moments, the action never provided any real tension and simply served to slow the story down. The Director's Son's Cut brings the movie down to a fast paced 75 minutes. This improves everything about it. The story now zips along and the mood is much lighter. The special effects, which were aging anyway, are now firmly in the background where they belong, and the comedy has taken center stage.

Perhaps not surprisingly, it is the two Pythons who provide some of the film's funniest moments. Cleese's part is basically a cameo, but his dry delivery as the murderous Halfdan is one of the highlights of the film. Jones's rather hapless and dippy King is likewise worth a chuckle. There are also some funny supporting players. John Gordon Sinclair is a scene stealer as Ivar the Boneless, the cowardly member of the Vikings and the relationship between father and son berserkers played by Charles McKeown and Tim McInnerny is also amusing. Granted, the comedy isn't on the level of an actual Monty Python film, but it still manages to be quite funny at times. Mickey Rooney, who has a small part as Erik's grandfather, manages to generate a smile just by showing up, but isn't given much to do.

Another thing working against the film is Tim Robbins in the lead role. He's adequate, but brings nothing special to the part. Tim Hulce (Amadeus), was originally cast, but had to drop out when the production was delayed. I'm not sure Hulce would have been better because the character really needed to be more of a leading man figure. The character of Erik is the straight man in the story and he could have used someone with more charisma to play him.

Although it's far from a masterpiece, the shorter director's cut creates a much more enjoyable experience. If your only memory of this movie is the longer cinematic cut and you're a fan at all of Monty Python, you might want to revisit it. This is definitely one of those occasions where less is more, with the original cut only being worth 2.5 stars, but this new version a solid 3.

Tim Robbins and Mickey Rooney in Erik the Viking

I have long been a Python fan and found plenty to enjoy in this briskly edited version. I saw the original movie upon its initial release and was sorely disappointed. This time I laughed my ass off. The first scene contains the old adage, “That’s alright then. It’s the thought that counts.” but never has it been spoken at such a darkly hilarious moment.

This collection of characters is an interestingly humorous lot. The Vikings, of course, like to drink and fight. They spend their down time in their hall drinking and killing each other. Like Scott, I found the father and son berserkers funny as hell. The father is always criticizing his son and insists on going along because they will need a “real” berserker. His son quietly protests pathetically, “I am one, dad.”

There is also the studly Viking whom all the women in the village cry over for leaving. They protest that no one else can do for them what he does. None of the other Vikings have a clue what they mean. Mickey Rooney is not given much to do but I found his laughter very contagious. The Viking village has a priest who has only converted one person but she turned out to be a Buddhist.

As far as Tim Robbins goes, I remember thinking how he almost ruined the original version. Here I was not so bothered by him. His best moment is the, “Now you see me, now you don’t.” scene.

As Scott wrote, Erik the Viking was a creation of Terry Jones as fairy tales for his children. This is a mostly family friendly film but it has some dark edges played for laughs. How do you explain to your children a Viking incapable of getting an erection so as to rape someone? As long as you have a slightly dark sense of humor, Erik the Viking, however small on plot, has plenty to laugh at.

Erik the Viking contains some very funny moments. Although some may find it offensive, I cracked up at the opening scene where Erik and Helga argue over the morality of raping and pillaging. “But that's a circular argument. If the only reason for the expedition is the killing and looting and the only reason for the killing and looting is to pay for the next expedition, they cancel each other out.” It is this absurdist Pythonesque humor that works best throughout the movie.

I enjoyed seeing Mickey Rooney as Erik's Grandfather. His laugh is infectious and his reaction to Erik telling him about the woman he killed (Helga) earlier in the movie is hilarious. I was hoping he would accompany his grandson on his quest to end the age of Ragnarök but at least he shows up again at the end. For 90 years he was the living definition of what it means to be a showbiz trooper.

Tim Robbins was fine in the lead. He acquits himself well enough whether doing comedy or reacting to those around him. Like Eric I found his funniest scene to be when he thinks he's wearing a cloak of invisibility when really everyone can see him (except King Arnulf and the old man). As a strategy it works though since the enemy assumes he's stark raving mad – and nothing is more fearsome in battle than insanity.

Eartha Kitt and Tsutomu Sekine both make cameos. Besides bringing some diversity to the cast they both provide some humor. Kitt with her deadly seriousness, and Sekine by being so over the top as he whips and insults the galley slaves on Halfdan the Black's ship. Yeah Eric, King Arnulf is in serious denial and not just about the fact that his island is sinking. Queen Arnulf is more like it (see photo).

Visually Erik the Viking holds up well. Although I think Scott's probably right that it was a smart move to get rid of most of the action and take the focus off the special effects and keep it on the comedy where it belongs. Valhalla looks good and I loved the idea of the gods as capricious children.

Clearly this movie wasn't meant for young children Eric. The characters and title are the same but the content is completely different from the children's book (there was also an Erik the Viking video game inspired by these characters). This may be Terry Jones' most high profile work since Monty Python but that may change with the release of his new film next year. It's called Absolutely Anything (2015) and it features the voices of all five surviving members of his old comedy troupe as well as being the last movie Robin Williams made before his death.