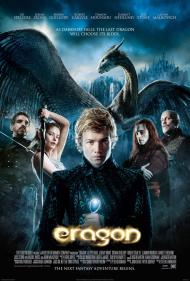 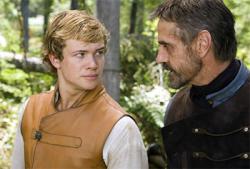 Eragon may please fans unfamiliar with the book, but it is a serious disappointment to anyone that has read it. Clearly most of the budget was spent making Saphira look as good as possible. The blue CGI dragon is far and away the best thing in the movie. But it isn't enough to make up for the MANY things missing from Christopher Paolini's vividly detailed book. They should have gone the Peter Jackson epic route instead of squeezing everything into less than 2 hours.

The story is a classic fantasy adventure set in a world similar to Middle Earth. A young farm boy named Eragon discovers a stone while hunting, it turns out to be a dragon egg and Eragon's life will never be the same. He sets off on a quest to become a Dragon Rider with an older man named Brom (he was a Dragon Rider himself once upon a time). Eragon and Saphira are soon caught up in a battle between the evil King of the land and an army of rebels. Sound at all familiar? Of course it does. The novel works because of the clever detail and original manner in which classic character types like elves, sorcerers, witches, dwarves and dragons are presented. The movie, by comparison, seems completely unoriginal.

One big problem is that the elves and dwarves seem no different than humans. In fact the dwarves are the same height as humans. The elf-woman Ayra had a very specific personality in the book. She was aloof and mysterious. Here she is more dull than enigmatic. Also, in the book the city of Teirm is a huge fortress city on the sea, onscreen it's like a tiny fishing village shown only at night in a thick fog.

It is rare indeed for a great book to become a truly great movie. Alas, Eragon is not one of them. 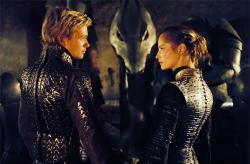 Entire chapters from the book were jettisoned for this movie. Characters that were given much dialogue and importance in the book are reduced to cameo appearances or eliminated altogether. Characters that are never seen or given any dialogue in the book, like Galbatorix, get their share of screen time and lines. Like Patrick, I like the book and was, at first, quite disgusted that so much had been changed. In the book, Saphira grows over the course of several months. In the movie it happens instantly and magically. However, as the movie went on, I realized that much of what the movie cut was lots and lots of yacking. Brom is Eragon's teacher and as they travel they talked and trained a lot. The movie trims that drastically, yet retains all of the action scenes.

I can live with trimming the plot to fit into a 2 hour frame. Having read the book I was always able to keep up with what was going on in the movie. My thirteen year old has not read the book and was a bit confused at times. The book has great detail about the dramatic chase into the mountains to find the Vardaan. The movie edits this part so drastically that out of nowhere, this huge army of Urgals suddenly show up and chase Eragon to a waterfall. The editors cut what was needed to be cut to make the movie work, but then they kept cutting to the point that the end of the film is almost unrecognizable from the book. The entire climactic battle is completely rewritten.

However, the worse offense committed in the editing room was that Eragon's personality is almost eliminated from the script. He is a wounded young man in the book who is quite unsure of himself. He is curious about his powers and his attraction to Arya. What's left on the screen is an English accented Luke Skywalker. Both are trained by old men from an old order. The director even has Eragon stare pensively into the sunset early in the movie as Luke did early on in Star Wars.

The effects are great and the pace is brisk. There is always something on screen to enjoy. Eragon is an entertaining enough movie, but it will probably be more enjoyable for those who have never read the book. 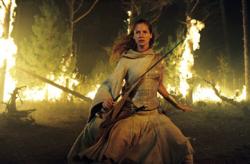 You're both wrong about one thing.  Not having read the book does not help the enjoyment of this movie.  I never read it and I still didn't like it.  In fact, I may have liked it less.  At least you guys had the memories of the book to help you feel something about this movie, even if it was only disappointment.  For me, I felt absolutely nothing, except vaguely bored.  I can't even say I hated it, because it wasn't even bad enough to evoke that strong of an emotion.  It was just dull.

Eric, you got it right when you said that Eragon has no personality.  He's a complete blank slate.  I never really rooted for him because I didn't know anything about him.  But then I didn't really know anything about anyone.  Who's Arya?  I don't know, because the movie never tells me.  About the only one with any personality or interest to me was Brom.  He seemed like the only character with any kind of depth, and having Jeremy Irons play him certainly helped, as he has the perfect voice for a fantasy movie.  John Malkovich, on the other hand, does not.

The special effects are okay, but nothing too spectacular.  They are eye candy, but CGI has become so realistic and commonplace now that it's at its best when you don't even think about it.  You just accept that there's a dragon, which you do here.

Like you Patrick, I was confused by the look of the elves and dwarves.  I wasn't even sure which ones they were in the movie.  I'm guessing the dwarves were the guys who were slightly shorter than everyone else, but not by much.  And I have no idea which ones the elves were.  Did they spend the whole budget on Saphira?

Although there is some action, it's completely bloodless and there's never a sense of danger.  I don't think Eragon even musses his hair during the whole movie.  The Urgals are easy to kill, you just wait until they jump down on you from above in slow motion, which they do about 3 different times in the movie.  And apparently breaking into the bad guy's fortress isn't hard either because Eragon does it.  Brom does it (how'd he catch up to Eragon in that scene where he saves his life, anyway?).  And Murtagh does it.  They must have forgot to lock the gate for that scene.

Patrick, you mention how rare it is for a great book to be adapted into a great movie.  It seems even harder when it's a fantasy novel.  It's definitely the red-headed stepchild of genres.