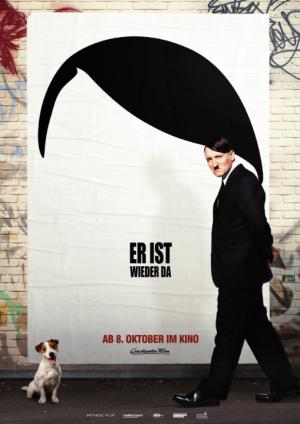 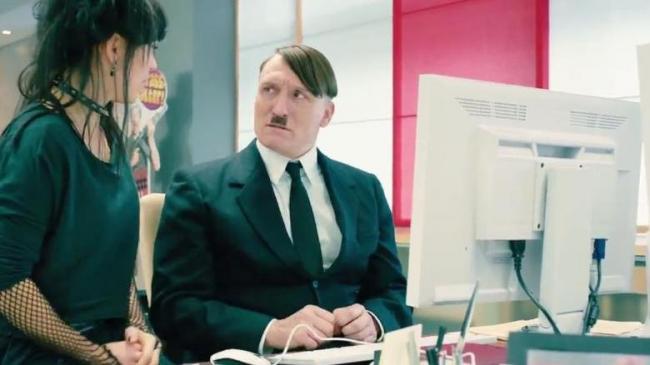 Oliver Masucci as Adolf Hitler, learning how easy contemporary technology makes it to reach a large audience in Look Who's Talking

Er ist wieder da (Look Who's Back) is a comedy from Germany that tackles the harshest subject in their history, Adolf Hitler. It begins with Hitler waking up in a park in the 21st century. He has no idea what happened or where he is. Thus begins a period of disorientation but he comes across a news stand where he quickly learns of current events and the political landscape. Fabian, a film maker who was in the park when Hitler emerged from some bushes, decides to take him in, thinking this nut job, that insists he is Adolf Hitler, would make for entertaining television.

The movie starts very light with people laughing at Hitler and the fact that he never breaks character. Hitler and Fabian take a road trip, where Hitler listens to the common people complain about issues such as immigration. He gets his own show and soon develops quite a following. Before you know it, social media is all a buzz about him and he starts collecting followers all the while speaking to an audience that starts to agree with all that he is saying.

As the movie goes on, it gets darker and darker yet it retains its sense of humor. When someone calls him a criminal, Hitler calmly asks him, "Do I look like a criminal?" to which the man answers, "You look like Adolf Hitler." Who smiles and says, "Exactly." Hitler writes a book about the struggles he has been having lately that gets turned into a movie. One person complains that the actor portraying him should be Benno Furhman. When Hitler ends up in a hospital, he wakes up to balloons, flowers and a get well card from Boris Becker.

The final part of the movie is quite dark as we realize that the most diabolical man in modern history has just seduced a country all over again. At one point, Fabian brings Hitler to his girlfriend's home where her grandmother recognizes Hitler as the genuine person and calls him out. Fabian starts to think he may be dealing with the actual Hitler. Look Who's Back ends with the line, "I can work with this." The way it is delivered gave me chills.

Some of the scenes of Oliver Masucci mingling with German citizens while he was dressed as Adolf Hitler were spontaneous moments and some of their reactions are quite interesting. Some give him the middle finger while others give him the Nazi salute. Some people have their eyes cover with black bars as they did not give permission for them to be used in the movie.

Perhaps it is because the subject matter fascinates me so much but I found Er ist wieder da to be one of the most unique and entertaining comedies in a very long time.