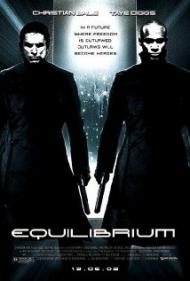 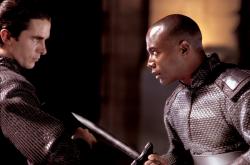 Equilibrium attempts to say something profound about human nature but winds up being just another derivative dystopian future flick that combines ideas borrowed from twentieth century literary classics (think Fahrenheit 451, Nineteen Eighty-Four, and Brave New World) with action fight scenes copied from The Matrix movies. An opening voice-over narration sets the scene, “In the first years of the 21st century, a third World War broke out. Those of us who survived knew mankind could never survive a fourth; that our own volatile natures could simply no longer be risked. So we have created a new arm of the law: The Grammaton Cleric, whose sole task it is to seek out and eradicate the true source of man's inhumanity to man - his ability to feel.”

Christian Bale stars as John Preston, one such cleric. He enforces the law against sense offenders – anyone caught having an emotion – seeking them out and destroying their hidden stashes of art – all of which is considered contraband and outlawed. To not very subtly make this point, at the beginning of the movie there is a scene where John Preston finds and destroys the Mona Lisa. All the citizens of Libria are forced to take daily dosages of an emotion suppressing drug called Prozium. Their leader is a mysterious figure known simply as Father. He is never seen in public but appears only via large screens.

One day Preston's partner is caught reading (gasp) a book of poems by William Butler Yeats. Preston is shocked to discover that his partner was not only a sense offender but that he had ties to the underground rebel movement, which turns out to be -literally- right under the ground where they are standing. Will John Preston realize the error of his ways, begin to feel, and join the rebels? Hmm, I wonder? And will he at some point find an old Victrola and a phonograph record of Beethoven's 9th Symphony, listen to it and burst into tears? Maybe.

While this is a somewhat intriguing idea it doesn't translate easily to the screen. Think about it, you have a movie where the majority of the characters are supposed to be incapable of experiencing a genuine emotion. A complete lack of feeling is a difficult thing to act and quite dull to watch. Christian Bale does a decent job but Taye Diggs seems to be constantly smirking.

Emily Watson is the female lead. She plays a sense offender named Mary who's apprehended by John Preston. Together they have the best dialogue in the movie...

John Preston: “I'm alive... I live... to safeguard the continuity of this great society. To serve

Mary: “It's circular. You exist to continue your existence. What's the point?”

John Preston: “What's the point of your existence?”

Mary: “To feel. 'Cause you've never done it, you can never know it. But it's as vital as breath. And without it, without love, without anger, without sorrow, breath is just a clock... ticking.”

The Matrix style action sequences involve a new form of martial arts that combines karate with weaponry. It's called the gun katas and it enables someone to somehow miraculously dodge bullets at close range simply by learning the statistics of the different likely angles. It is never satisfactorily explained and is one of the sillier aspects of a movie that constantly walks the line between fantasy and ludicrousness.

The cinematography is nice and the sets are quite effective. Writer/director Kurt Wimmer (an American of German descent) shot many scenes at locations in Berlin, like Olympic Stadium, Deutschlandhalle, and the Brandenburg Gate in order to give the movie the right combination of “fascist” and “modern” architecture. The scenes set in the exterior of the city, where many of the rebels hide, were shot in partially dilapidated neighborhoods in East Berlin.

Equilibrium has its moments but overall it's a rehash of ideas put to better use elsewhere. 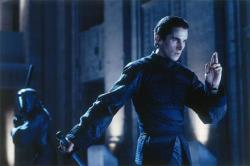 I tried watching Equilibrium a few years ago, but could not get past the first ridiculous action scene. Armed rebels have the high ground but are pathetically inept against the police. Bale kicks in a door, slides on it like a surfboard and then pauses dramatically in a pitch black room before opening fire and killing everyone in the room without mussing his hair. Seeing that Patrick reviewed it, I gave it a second look, unfortunately.

The real problem I have with this film is that the very premise itself is vastly flawed. As Patrick wrote, this dystopian future is a place where the population is controlled by an oppressive government that attempts to squash human emotion with a drug called Prozium. Art, literature and anything else that may cause an emotional reaction is illegal. This makes for a dark view of the future but not a very realistic one.

As my brother Scott once wrote about Star Trek, good Science Fiction stories are metaphors for actual social issues. Therein lies this movies biggest problem. If a government wants to control its population, it does not do it by trying to stamp out their emotions. Feelings are too innate to the human experience to deny. If you want to control the populace, you take advantage of their emotions.

In the days following 9/11, the United States was in such a patriotic fervor that George W. Bush could have gotten away with any military action he wanted. Note, the Patriot Act was passed during that time. The environmental movement does not sell its theories so much on fact as it does on emotional response. I cannot count how many people have argued man made global warming to me on an emotional level. "What land will be left for our children if we allow drilling in Anwar?" "Look how sad that polar bear seems on that ice floe." All Barack Obama has to do to justify huge spending is to say it is for "Green" jobs or energy and all the believers feel better about it. My own small town gets us to vote for a tax raise by threatening to cut our police force if we don't. Fear is a powerful motivator.

No, controlling emotions is pointless and impossible. Exploiting them is where the real power comes from. You make everyone think they are making their own decision, when in fact they are simply going down the path they have been led to. It is a seemingly win win arrangement.

Diggs does indeed smirk his way through the film, which is a contradictory way to play an emotionless person. When he arrests Preston, he clearly smiles down on him and then gets very angry with him in public. Do these guys show emotions or not? Either way, it does not matter. This film steals 1984's twist ending and left me wishing I had read the book again instead of watching this.

Patrick compared the fight scenes to The Matrix and rightly so. This is made all the more similar by the familiar dark clothing worn by the leads. He wrote that the action sequences involve a new form of martial arts that combines karate with weaponry. That may have been the intention, but all I saw was lots of posing. The soundtrack should have featured Madonna's song "Vogue" every time Bale gets into a fight. At least then this film would have been good for a laugh.