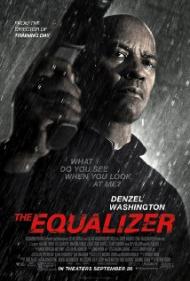 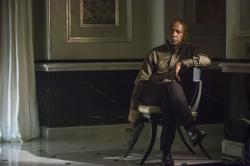 Denzel Washington in The Equalizer.

Based on the 1980's TV series of the same name, The Equalizer sees the reteaming of Denzel Washington and director Antoine Fuqua, who worked together so successfully in 2001's Training Day. Although much lighter fare and without a chance in hell of winning an Oscar, together the two of them, with a script by Richard Wenk--who also wrote The Expendables 2--produce a pretty entertaining vigilante fantasy piece.

Washington plays Robert McCall, a loner who works at a Home Depot-type store by day and lives a solitary life at night with behavior that borders on OCD. He spends a good portion of his nights at a diner where he befriends Elana, a young hooker played by Chloe Grace Moretz. When Elana is nearly beaten to death by her pimp, McCall reveals there's more to his history than his lifestyle suggests (something we already knew because of the previews and the premise, but which the film takes its sweet time to get to) when he gets his revenge by murdering the pimp and four of his associates. It turns out (again, as given away in the previews) that these were no ordinary pimps, but members of the Russian mafia and soon McCall finds himself in a running battle with Teddy, a killer from Russia, and several corrupt Boston Police officers.

The best thing the movie has going for it is its star. Washington is 59 years old and yet still manages to convincingly play the action star. I almost wrote, "realistically play the action star", but there's nothing realistic about this film. McCall, despite getting shot a couple of times, is indestructible and capable of the most extraordinary feats. He's an unstoppable killing machine. We learn only a little about his background and his character is a bit muddled. He's the good guy and a comparison is made to Don Quixote, but he also dispatches the bad guys dispassionately and in the most violent and gruesome ways. He's rarely content to simply shoot someone, instead he most often uses whatever tool is to hand, including a corkscrew, barbed wire, a tree trimmer, and a nail gun. Washington brings a quiet, but deadly sense of style to the killer that makes up for many of the film's weaker points.

Of the supporting cast, only Moretz makes an impression. Her career is heating up and she definitely seems to be one to watch, but it will be interesting to see if she can sustain her career as she transitions into more adult roles. The only other character of note is Marton Csokas as the Russian killer sent after McCall, but after a promising start he quickly turns into just another generic movie villain. Bill Pullman and Melissa Leo show up late in the film in cameo roles, but without much distinction.

Fuqua has a habit of overdirecting the action scenes and he resorts to slow motion far too often, including in that most generic of action movie shots when he has Washington walk away from an explosion without looking back. A later scene finds McCall in the shower of an activated sprinkler system that, as you probably guessed, is also filmed in slow motion. And at over 2 hours, slow motion is the last thing this movie needs. Nearly the first 30 minutes are used simply to show McCall's routine life and further time is wasted on a subplot with McCall and a co-worker he's mentoring. There are also several scenes where the POV is from McCall's line of vision as he calculates his action moves that seems a bit hacky and slows things down.

Marton Csokas in The Equalizer

Scott nailed this film's problem. It takes far too long to get going. Instead of the several scenes of Robert at work, we need only one that includes his lunch break with the fat guy he is encouraging to lose weight. Instead of the several scenes at the diner, we need only one that ends with the pimp pulling Elena into his car. I agree that Chloe Grace Moretz does a decent job but her part only requires about three scenes. Her character pretty much disappears after the first half hour anyway.

Fuqua, or the editors, should have been much more liberal with the use of scissors in the cutting room. Scott mentioned the POV scenes, but they are actually worse than he describes. The scene where Robert takes on the five Russian mobsters is ridiculously redundant. When the scene begins we are shown a Russian with a knife, another with a cork screw and another with a gun. Then we are shown that again. When Robert decides to take them on, we are again shown each of the weapons in question as he plots his course of action.

Denzel Washington is the best this film has going for it. One minute he is the nice guy you work with, who is always willing to help and the next he is a stone cold killer. As Scott noted, he is never shown using a gun. He has far too much imagination when it comes to dispatching people from this earth. One of Washington’s best moments is when he sits himself at the same restaurant table as the perpetually scowling Marton Csokas, places the broken bloody eyeglasses, belonging to a man who recently left the table, into Csokas’s drinking glass and says, “He’s not coming back.”

I am not as enthused about a potential sequel as Scott. A movie warrants a sequel if the main character is interesting enough to revisit. Robert McCall is rather dull. Sure, he kills and kicks ass but what of his personality. He reads, has OCD and likes to help people. He is, basically, a librarian with a dark side. The movie shows us his political connections and hints into his past personal life but not enough to make him unique or truly fascinating. The only time he is at all worth watching is when he is ending someone’s life, which returns me to the point of how much should have been edited from this film. 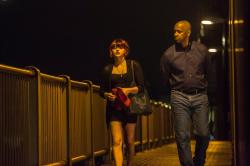 Chloe Grace Moretz and Denzel Washington in The Equalizer.

I concur with both of my brothers. Denzel Washington is easily the best thing about this movie. He has reached that rare stage in his career where his mere presence is so familiar and he carries such gravitas that we don't need much exposition about Robert's past. Much like John Wayne or Clint Eastwood in decades gone by, we already know this guy. He's noble and kind but a demon from hell when crossed.

The script tries too hard to set a mood of realism during the slow opening thirty minutes. Then once the action scenes begin all sense of reality is thrown completely out the window – rendering the opening scenes moot. Robert accomplishes feats of daring, strength and dexterity that defy all believability. He even times himself with his watch before dispatching five armed men in less than thirty seconds. I agree that the gimmick of showing Robert's POV before he goes into action is overdone and becomes quite redundant before the end of the picture. Why doesn't anyone think to shoot him while he's silently planning his course of action?

Don't get me wrong, the fight scenes are exciting and well staged. Denzel worked out and attended daily fight sessions to prepare for the role and it shows. But it's his subtle acting that really makes Robert such a badass. His demeanor remains calm at all times. Only his eyes betray his disgust and determination. His steely gaze never wavers.

Another problem with the script is its treatment of the Russian mobster played by Martin Csokas. It goes to great pains to show how ruthless and deadly he is but then when confronted by Robert he is easily outwitted and defeated at every turn. In most movies of this ilk, there's a scene or two where the villain has the upper hand. Not so here. Robert is never even close to being defeated. Even the climax where the bad guys think they have lured him into a trap turns out to be the other way around.

Scott mentioned Liam Neeson and it's an apt comparison. Like Neeson in the Taken movies, Denzel Washington is far superior to the material at hand. In some scenes he seems to think he's in an Oscar caliber drama and not a fantasy vigilante piece. Like the Taken movies, the best thing The Equalizer has to offer is the chance to cheer along as the superstar hero dispatches legions of bad guys and exacts justice for the many innocent citizens wronged along the way. Watching it is like attending one long pep rally for revenge.