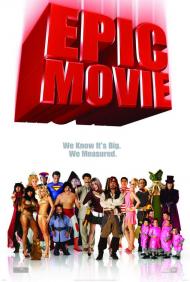 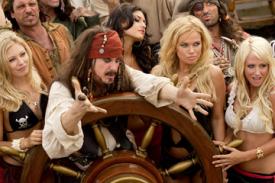 Epic Movie is tired and worn out.

Movies making fun of other movies through satire has become a boring gimmick. With minimal creativity, Epic Movie proves just how worn out the genre is.

The plot, if it's even worth calling it that, is about four people who get trapped in Willy Wonka's factory because Willy wants to put their body parts into his candy. Can you guess where Willy gets the nuts for his candy bars? To escape Wonka's taunt of, “Who wants to play with Willy?” The four go through a wardrobe into the land of Gnarnia. You know, with a silent “G” to avoid copyright laws. There, they must do battle with The White Bitch. WOW! These creative writers came up with changing The White Witch's name to White Bitch. I wonder how long it took them to come up with that?

Everything from Pirates of The Carribean to Click to Superman Returns gets skewered, but none very well. The best movie moment comes when they go to Hogwarts and find that Hermione is a pregnant chain smoker.

Kal Penn leads a not very notable cast. Penn's biggest moment comes when the White Bitch points out her castle and it ends up being a White Castle restaurant. Penn then says, “I think I've been there before.” Of course this is a reference to Penn's movie, Harold and Kumar Go to White Castle. I can just see the producers hoping and praying that they could get Penn to do this movie just so they could include that joke. Campbell is as boring here as he was in Date Movie. Mays spends the entire film imitating Anna Faris.

The entertainment of Epic Movie is based on two factors. First, it is how well you recognize all of the movies and MTV television shows that get referenced here. The second is how well you think the writers poke fun at those films. Sadly the writers can think of little more than just adding some swear words and sexual innuendoes. Clearly this movie is made for teenagers, and not very bright ones. 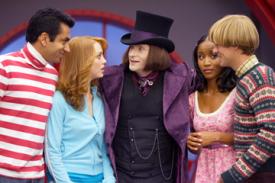 About the only good thing I have to say about Epic Movie is that I liked it a bit more than I liked last year's Date Movie. That is to say that Date Movie was really, really bad, while Epic Movie is just really bad. I'm not sure if Eric isn't being a little too generous when he says this movie is aimed at teenagers. I'm not sure that they weren't aiming for even younger than that.

The problem with even calling this movie a satire is that it rarely bothers to even satirize the movie it references. It seems to think that just referring to a movie is humor enough. Like Eric I found the Harry Potter scene to be one of the movie's best, as it displays real knowledge of its source material by playing with the notion that the kids playing Harry, Ron and Hermione are aging a lot faster than their characters.

I also agree with Eric that Mays is basically trying to channel Anna Faris, but I found her to be funny anyway as she repeats nearly everything Chambers says.

Like Date Movie last year, Epic Movie could have found comic gold in a genre of films that is ripe for mining, but once again it fails to do so. I get the idea that the writers just sat around in a room one night, getting high or drunk and writing down whatever idea happened to hit them at the time. Maybe finding it funny requires that you be in the same state. 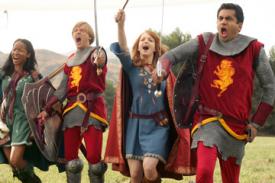 You mean that wasn’t Anna Faris?

Yes this movie is bad and I understand my brother’s point about them throwing out movie send-ups seemingly at random without adding much beyond the recognition factor for a laugh. But you have to at least give this movie credit for cramming in the most homage’s scene for scene of just about any movie in the spoof comedy genre. And many of them are older movies and some are done in a more subtle fashion than one might expect. Scarface (not subtle), Stand By Me, and A Christmas Story (both subtle) as well as television classics like Gilligan’s Island and The Love Boat are referenced. There are some laughs to be had but I have to agree that this was one lazy team of writers and the results are eminently forgettable.