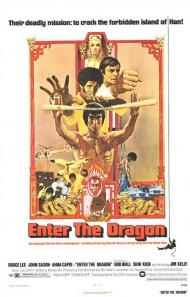 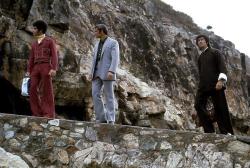 Enter the Dragon sits at the pinnacle of martial arts action films. It was the first Chinese martial arts movie to be produced by a major Hollywood studio, Warner Bros. It was the final film for star Bruce Lee. His death just weeks before the premiere added to the movie's legend. In 2004 it was selected for preservation in the National Film Registry. On top of all that it is one of the most purely entertaining of movies.

Enter the Dragon borrowed heavily from the James Bond franchise. The plot is reminiscent of Dr. No, and the villain is as well, although he also seems to be channeling Blofeld with his effete mannerisms. He even carries a white cat around in one scene. It also screams 1973 with the afros, bell bottoms and groovy soundtrack. It was certainly one of the first big studio movies to have such a multicultural cast. Although the obvious fact that it was shot without sound, with the voices and sound effects being dubbed in later, gives it a definite B movie feel. This is one of the few English language movies where Bruce Lee's real speaking voice is heard.

The story centers around a martial arts competition that takes place at an island fortress run by the mysterious Mr. Han. Lee gets an invitation to compete but is also sent on a mission by British authorities to uncover evidence of Han's illegal activities. In a flashback scene we are shown how Han's men were responsible for the death of Lee's sister, which makes it a personal mission of vengeance for him.

Two other characters are introduced on their way to the competition. Roper is a gambling Caucasian playboy on the run from his debts, and Williams is an African-American activist on the run from a violent encounter with two racist police officers in Los Angeles. It turns out that Roper and Williams are old army buddies who served in Vietnam together. All three men receive a warm reception on the island (including being allowed to choose women to sleep with) before things turn deadly.

These three men are all instantly likable heroes overflowing with charisma. They may not be the greatest actors in the world but these men are so damn cool that you will find yourself wanting to be them. I know I did as a boy when I first saw it. The fight scenes are all excellently staged and much more real than today's over-the-top CGI enhanced fights. A very young Jackie Chan has a few scenes. He gets kneed in the nuts by Lee's sister, and then gets his neck snapped by Lee during the climax. The iconic final fight between Lee and Han takes place in a room filled with mirrors.

Enter the Dragon is a movie that Eric, Scott and I loved as kids. I hadn't watched it in well over thirty years and had no idea if it would live up to my memories. I'm happy to say it did. It is that rare movie that I found to be just as entertaining now as an adult as I did as a ten year old. 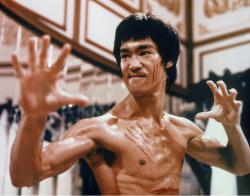 Bruce Lee in Enter the Dragon.

There's no denying the entertainment value of this movie and it is a classic of the genre. You also can not deny the star appeal of Bruce Lee. However, the script is rather weak and the dubbed sound effects are completely over the top. Seen today, much of it comes across as rather cheesy.

The three leads are the film's greatest asset despite their limited interactions. Lee had a great screen presence and your eye is drawn to him whenever he appears. His physicality is remarkable. When he removes his shirt you can see that he has zero body fat and seems to be one lean muscle. Like Lee, Jim Kelly was a martial artist first and an actor second. In 1971 he was the World Middleweight Karate champion. His appearance in this film lead to him appearing in several blaxploitation movies that played up the novelty of an African-American martial arts master. John Saxon was the only true actor of the three leads and is thus able to act as if he is a martial artist, but then with Lee, Kelly, and Jackie Chan around to help guide him, he must have learned some real moves.

There is a certain whiff of James Bond about the plot, with the hero being sent to infiltrate a villain's island headquarters. The Bond franchise would repay the compliment the following year by heavily featuring Kung Fu in 1974's The Man with the Golden Gun. One thing that the Bond films had over this movie though is the benefit of one central lead character. Here the three characters are given varying amounts of screen time, but they're equal enough that it's hard to say who is the main protagonist. Lee is the star and he should have been given more screentime. The entire movie should have been told from his point of view.

The fight scenes, as Patrick mentioned, were done without the help of CGI and are fairly impressive. Lee is so fast that several scenes are slowed down just so you can see his moves. In the film's climax, he is a one man fighting machine, mowing down dozens and dozens of henchmen. The final battle in the mirror room is an iconic scene with a shirtless Lee, complete with strategically placed bloody cuts, an indelible image. However, it should be noted that despite Lee's impressive talents, a stuntman was employed for several of his scenes.

Although standard with the genre, the sound effects do get annoying. Every karate hit sounds like a brick smashing into a wall, even if it's a slap to the face. It cheapens the actions scenes. The sound effects are put to better use during the scenes where someone is killed. Several times it happens just out of camera shot and all you hear is the snapping of bones.

There's a lot to enjoy about this movie and it makes me wish that Lee had survived to make other, more polished films for American audiences. Perhaps he would have made one with a script as strong as his karate moves.