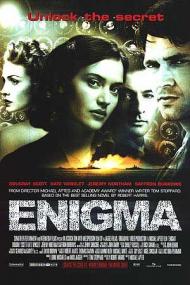 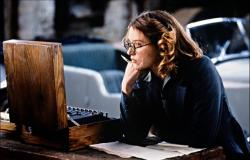 From 1941 onwards, the Allies, thanks to British code breakers and the obtaining of a German coding device known as Enigma, were able to know ahead of time of many of the German troop and naval movements.

Enigma the movie takes place at the headquarters of the British code breakers which was known as Bletchly Park during the early years of World War II. Here, British code breaker Tom Jericho, who is loosely based on real life code breaker Alan Turing, is returning from a months leave following a nervous breakdown. He is summoned back to help decipher the German's newest code which has been introduced on the eve of the departure of a large fleet of supplies from America. Jericho is more concerned, at least at first, with the disappearance from Bletchly of the woman who drove him to his breakdown. The movie's main thrust is the solving of these two mysteries, which may or may not turn out to have a great deal to do with each other.

With a script by Tom Stoppard, this movie is, as you'd expect, an intelligent and witty one, mixing drama and tension with small moments of humor. And while a study of code breaking itself would make for a boring movie, this movie provides just enough of an explanation as to how it is done to move the plot along, which isn't about code breaking, but rather the code breakers themselves.

Along with Jericho and an assortment of academic oddballs, there is Hester, played with nerdish sexuality by Kate Winslet, who, although perhaps the intellectual equal of many of the code breakers, is a mere clerk, due to the sexist attitudes of the time. She plays Claire's (Jericho's ex-girlfriend) room mate, and the woman who must help Jericho solve his two mysteries. She, along with Jeremy Northam, who plays the intelligence officer sent to keep an eye on the intellectuals with a sophisticated smarminess, are the two most delightful characters in the movie. Although Dougray Scott plays the tortured genius of Tom Jericho quite well.

One particularly tense scene in this movie which stood out for me, was the moment when the code breakers are faced with an enormous dilemma. They know the Germans are going to attack the supply fleet as it crosses the Atlantic. They know that if they attack they will be forced to broadcast dozens of messages in code. Code which the code breakers can use to help crack future codes. However, this also means that the fleet will probably be sunk. Alert the fleet now and send them home saving a thousand lives now, or let them go so that 10's of thousands can be saved in the future?

Enigma is no enigma, it's a tense and well acted war movie, written with intelligence and wit, and directed with calm assurance. 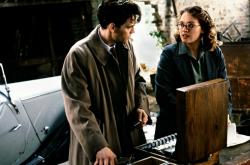 As a fan of author Robert Harris, I was eager, yet slightly hesitant to watch Enigma. Harris's first novel, the brilliant Fatherland, was made into a disappointing movie. The emotion and atmosphere did not translate well from page to celluloid.

Fatherland takes place in a fictional Nazi Germany in the 1960's. The book gives much detail into the setting of a victorious Third Reich with an old secret. The scope of the novel was too big for the production that made it into a movie. You get none of the mysterious feel in the movie that you had throughout the book. Also the great ending in the novel was changed to be much less memorable.

Enigma, the movie, is as well-edited and different from the book. However, to my great relief, it is done for the better. The beginning of the movie, through quick flash backs, explains Tom's relationship to Claire. It also saves time by explaining Tom's breakdown as the story proceeds, instead of starting the movie out in Cambridge as the book does. Hester, who is barely in the first half of the book is made a major character in the movie. The endings are different, yet come to the same conclusion. The best change for me is that the book merely hints at what happens to Tom and Hester after the mystery is solved. The movie spells it out to a more conclusive ending.

Like Scott, I enjoyed Jeremy Northam's performance. His character is subtle and very droll. He has all of the best lines. "Hunting prints." He says to the strict, overweight landlady as he looks at the wall ignoring her command of no visitors. "Do you hunt?" he sarcastically asks the blank faced old woman as he continues up the stairs.

One angle to this movie, that I am surprised Scott failed to mention, is the brilliant symbolism of the whole story. The characters in this movie are trying to discover the secret settings of the Enigma coding machine. Tom is searching for what happened to Claire. Thus Tom is actually dealing with two enigmas.

I almost wished that I had not read the book so as to have enjoyed the mystery angle of the story more. Still, this is a great movie that also gives a history lesson of World War II. For another look at the Enigma code, watch U-571. It can practically be considered a prequel to this movie. 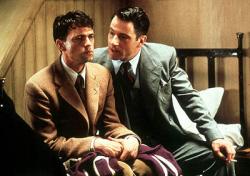 Eric, I enjoyed U-571 more than this movie. Oh and Scott actually did mention the fact that Tom is dealing with two enigmas in his review. I found Enigma to be rather slow, especially during the first hour, and the details of the mysteries that keep getting peeled away, like the layers of an onion, are not exactly exciting or world-shaking. If you think a movie about code-breaking sounds a bit dull, you would be right.

The acting is first rate though. Kate Winslet, for example, gives her nerdy character the nice little touch of constantly adjusting her glasses. Dougray Scott, who reminds me a bit of a slim Russell Crowe, as Tom Jericho is brainy but depressed. I agree that Jeremy Northam steals his scenes and brings some much needed levity to the proceedings. The beautiful Saffron Burrows, as the elusive Claire, certainly looks the part of a woman capable of wrapping men around her little finger and then breaking their hearts with ease, although she isn’t given much to do as an actress.

It’s not that this is a bad movie, I was just expecting more. The climax was a bit of a letdown. The pacing is somewhat slow, especially at the beginning. Perhaps if I had read the book I would have gotten more out of it. I do agree with Scott about the tension in the scene where they are waiting to intercept the info that will allow them to crack the code at the expense of hundreds of lives lost at sea.

However, this scene also serves to remind the audience that (apart from a few brief scenes of U-boats in the Atlantic) this is a war movie without the war. Enigma is gorgeously shot, features a talented cast and is peppered with witty and intelligent dialogue. Yet despite all of these rich ingredients the end result was a bit too bland for my tastes. 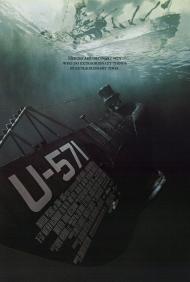