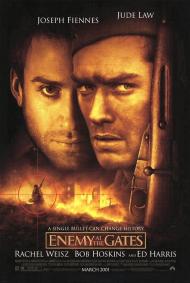 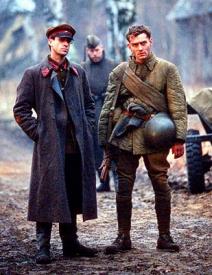 Joseph Fiennes and Jude Law in Enemy at the Gates.

I can enjoy a foreign film as much as the next guy. I also like Hollywood movies. The difference is in the feel and movement of them. Foreign, particularly European, films tend to be emotionally driven. Life Is Beautiful is all about the characters emotions. Hollywood likes its action. In Schindlers List you really only remember the scenes of brutality. Enemy At The Gates is a combination of the two.

The movie starts out feeling entirely like a foreign film. There is very little dialogue. Just some background yelling. The main character, an actual Russian war hero, played by Jude Law, expresses all the fear and confusion that any man about to enter the hell that awaits him would feel.

Early in the movie the Russian soldier meets a political officer (Joseph Fiennes), while each are feigning death in a fountain as German soldiers pass by. It is truly a brilliant scene filled with tension and action, as the soldier shoots several German officers. The two become friends and neither of their lives will ever be the same again.

The political officer prints in the paper the young soldiers marksmanship abilities and soon turns him into a national hero in the fight to defend the Mother Land from the Nazis. He meets Nikita Kruschev (Bob Hoskins), and soon discovers that he has more responsibility on his hands than he would like. To further complicate his life he falls for a girl (Rachel Weisz from The Mummy), that the political officer also has eyes for.

Up to this point the movie is perfect. However, Hollywood steps in, in the form of Ed Harris playing a Nazi Major who is assigned to kill the now famous Russian sniper. The newspapers are keeping track of every one of the snipers kills and this is upsetting the Nazi high command. The tone changes at this point. It becomes a more action driven piece. That may not have been so bad, had Ed Harris been given more of a character to work with. He plays a steely blue eyed assassin that we learn nothing personal about.

The action scenes at this point also get a bit far fetched.

The scene where Jude Law's character is trapped behind an old stove and gets saved by the sun's reflection didn't work for me. Another part where the Nazis, some how, capture one of the Russians comrades is never shown. The audience just has to accept that it happened so that the following ironic scene can occur. Also the death of one of the main characters was a little over the top.

This is a very good movie. However, it could have been great had it been more consistent. 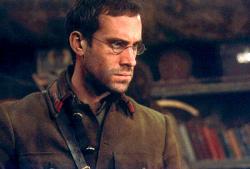 Joseph Fiennes in Enemy at the Gates.

War is dirty, ugly, and just generally hellish, or so I feel I can safely assume, never having actually been in one. Enemy at the Gates does a good job of showing that and like Eric, the opening of this movie interested and intrigued me.

The movie opens with the Russians forcing their soldiers ashore in Stalingrad, issuing one gun to every second soldier with the instructions that when (not if) the man with the gun was killed, the one without the gun should pick it up and carry on fighting. When the poorly armed and obviously poorly trained Russian soldiers are massacred by the German tanks and artillery, those who survive long enough to attempt a retreat are gunned down by their own Russian officers for cowardice. This opening, which climaxes with the scene in the fountain that Eric referred to, is a great way to open a war movie. I have to agree with him that it's after this opening that the movie starts to fall apart.

What begins as a new perspective on World War II through the eyes of a Russian sniper, soon becomes a standard and only mediocre war movie. One of the few characters I enjoyed was Joseph Fiennes as the Political Officer. Apart from the opening and Fiennes communist propaganda, the fact that this is a Russian war story never comes through, which is a pity because the Russian angle really could have put a new slant on this film and it fails to capitalize on that.

As for Ed Harris's steely-eyed German sniper, I must again defer to Eric's judgment that he is never given an opportunity to develop any sort of character. For his and Jude Law's sniper 'duel' to have been truly effective as a cinematic device it would have helped to know more about him.

Eric's judgment of this movie is a good one. At least right up until he said that it was 'a very good movie'. At best this is just an ok one. 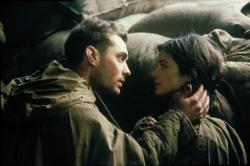 Jude Law and Rachel Weisz in Enemy at the Gates.

Both my brothers are too hard on this movie. This was the best World War II movie I have seen in some time. It may not have the emotional resonance of The Pianist or Schindler's List but for my money it is far more entertaining than either of those movies. First of all I enjoyed the fact that this movie was told from the Russian point of view. We have seen W.W.II from the American, British, French and Polish Jew point of view so many times before that this fact sets the movie apart right away.

I don't understand my brothers' criticism of the Ed Harris character. Compared to 90 percent of war movies he is more developed as a person than most bad guys. Usually the enemy is a faceless, nameless, entity roaming the shadows.

Here we have two men with exceptional marksmanship skills squaring off in the middle of the war torn city of Stalingrad. The German character is an arrogant man whose ego will never let him give up in his quest to assassinate the Russian hero. It is a personal vendetta for him. You get the sense that he is more embarrassed by the Russian's success at eluding him than he is worried about the actual damage being done to the German war machine. On the other side Jude Law as the Russian sniper is a man filled with doubts about his ability to defeat the German as well as being uncomfortable with the role of national hero that was thrust upon him by the Joseph Fiennes character.

As for the few scenes Eric mentioned as being over-the-top, again I disagree. I found the sacrifice that Joseph Fiennes character makes at the end of the movie to be very powerful and quite a brilliant and original plot twist. I could have done without some of the romantic scenes, since, as a rule, romance should be kept out of war movies. But other than that I was thoroughly entertained and moved by Enemy at the Gates.