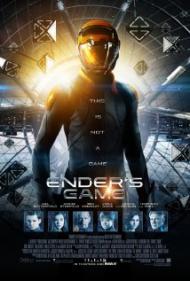 I've never read the much loved, and long considered unfilmable, novel on which this movie is based. I can't therefore speak directly to those who hold the novel so dear. I can only pass on the observations of someone who comes freshly to this story through the movie. With that in mind, I can't say I'm impressed or in any way motivated to seek out the source material. It's overly long, takes itself way too seriously, and despite trying to pose some philosophical questions, lacks any kind of depth.

The story is set at some unknown time in the future, fifty years after the Earth has successfully fought off an alien invasion. To prepare for the return of the aliens, mankind has set up a military training school for children who, for never adequately explained reasons, it has been decided, make the best military leaders. The hero of the story is the titular Ender who is purportedly a genius at strategy. He is mentored by the gruff Colonel Graff who sees Ender as the savior of the human race. He progresses Ender up through the ranks quickly, pushing him toward his first command, which leads to the film's climax.

Most of the story takes place at the training school, which feels like a cross between Top Gun's flight school and Hogwarts. Ender makes friends, enemies and spends a lot of time playing a zero gravity variation of Quidditch (and yes, I know that Ender's Game was written before Harry Potter). Some of it is entertaining and a lot of it is eye candy, but it's never as deep as it seems to think it is.

The climax of the film throws in a twist, but it's so obvious that it's hard to even call it one. I was able to figure it out based on simply knowing how long the film was and how close to the end the final simulation was taking place, to guess that there wasn't enough time left unless the film was going to end with a cliffhanger or the twist that it does end with.

For a movie with such big ideas, the cast is rather small and not all that impressive. Asa Butterfield as Ender, is 16 in real life, but looks closer to 12. His character is more of a whiner and a prima donna than a hero. This might work in a novel with real ideas behind it, but not in this shallow attempt. I also never bought into the idea that the human race would hand over their entire fleet to the hands of a teenager no matter how much of a genius he's supposed to be. The explanation that children learn faster so they'll make the best leaders is silly. The fact that they can learn faster is true, but it doesn't mean they have the emotional maturity to handle the responsibility.

The acting is nothing to write about. Harrison Ford, who started the year so promisingly in 42, is fairly dull here. The teen actors are all walking cliches. Butterfield does a fairly good job in the lead, but the writing cripples what could be a strong performance.

Visually, the movie looks fine, but does little to distinguish itself from other Science Fiction films. The space battles could be from any number of generic movies or video games and they carry about as much emotional weight. The gravity free battle room is the film's most distinctive set, but a little of that goes a long way.

I can only assume that since the book is so beloved that it's much better than this movie. It's not that it's horrible, just that it's dreadfully mediocre. 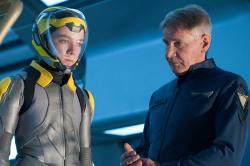 I too never read the book. I have no idea how this movie compares to it. I do not know what was added or deleted. What I do know, is that Enders Game, the film, is one boring movie going experience. The plot is almost entirely just Ender attending science fiction boot camp. I have seen hundreds of military boot camp films that were more entertaining than this film and they did not even feature a zero gravity play room.

As played by Asa Butterfield, Ender is skinny and slightly feminine. I bought him as a book worm but I never believed him to be tough enough to win any fist fight. The fact that, potentially, the entire future of mankind is put into his hands is laughable.  Are we really to believe that the big decision he made was never thought of by an adult? An adult unknowingly gave him the strategy anyway.

The finale of the film is the one aspect I truly enjoyed. It presents a moral dilemma on war. On one side is the, “Just nuke-em.” Or, “Kill them all, let God sort them out.” ideology. It also presents the other side of wanting to talk to the enemy and try to understand them.  One feels like the right thing to do but is without any guarantees. The other is a game over move but is morally questionable. It is a potentially intriguing philosophical debate but, again, why is that choice put in the hands of someone so young and inexperienced? 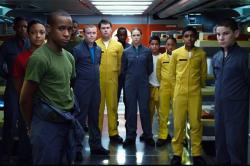 At the risk of sounding like a parrot, I haven't read the novel either. But my husband has (sorry Orson Scott Card) and while he enjoyed this movie he didn't think it approached the greatness of the book. I enjoyed it more than either Scott or Eric but I agree it's far from great. The storyline may not be all that original but it is intriguing enough to keep your attention. I identified with Ender and rooted for him throughout the movie.

I liked the fact that the story doesn't shy away from the ruthlessness of war and that these kids aren't portrayed simply as innocent beings in need of protection. Anyone who has spent any time on a playground knows just how vicious kids can be. Most of the children in the movie are quite aggressive and hostile towards Ender. As Eric so humorously put it, he is forced to fight older kids and must learn to assert his authority. This story is a geek's fantasy, and Ender is the classic outsider who is really smarter than everyone else around him.

From what I'm told, the book is much more of a psychological experience than this movie. A good portion of it takes place inside Ender's thoughts, hence the long held assumption by the author, and others, that the book is ill-suited for a cinematic translation. I think they may have been right. I can only assume that the inner conflict and growth experienced by Ender in the book is what makes it so good. The surface accouterments, like the Zero Gravity Room, are nothing special and certainly don't make this movie stand out from your typical entry in the genre.

The cast is decent but nothing special. The younger actors fare better than the adults. Harrison Ford just seems old and cranky, and Viola Davis isn't given much to do. Asa Butterfield is quite good though as Ender Wiggin. He definitely embodies the part both physically (with his thin frame and average looks) and in his unassuming manner that is underlined with a steely core.

Like Eric I thought the ending was the best part. The fact that “Ender's Game” isn't a game at all but is actually happening in the real world isn't the big twist. The revelation of the truth about the alien race is. It changes the story in a huge way and casts a morally ambiguous shadow across humanity. Colonel Graff and the other adults have played a sick psychological prank on these kids. Yes, it was in the name of (purportedly) saving humanity but it was still all types of fucked up. Even without having read his book, I think Orson Scott Card was probably right when he said Ender's Game was unfilmable.