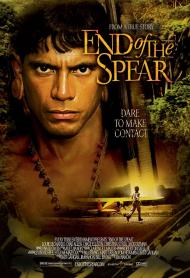 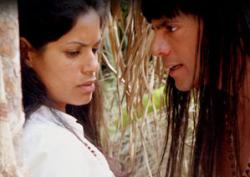 End of the Spear.

The world is full of idealist. People who think other people should change for what they claim to be is the better. Missionaries have gone around the world pushing their religion to the far reaches of the globe. Although, I have never thought highly of people who try to push their way of thinking onto other people, I do admire their conviction and determination. At least they are fighting for their cause on the front lines, unlike some environmentalists sitting in a Manhattan skyscraper spouting how people in the mid-west should live a more earth friendly life.

The End of the Spear is based on two true stories. A boy, Steve, lives in Ecuador with his parents and their missionary friends in 1956. They are there to make contact with the Waodani Indians. The other story is that of Mincayani, who is a Waodani tribesman, and eventual chief, who lives in the jungles of Ecuador.

Steve's dad flies a yellow prop plane over the jungle in search of the Waodani, who call it a giant wooden bee. He eventually sees them staring at his plane and soon discovers their village. He and 4 other young missionary men fly into the jungle and land on a sand bar next to a river. They are soon greeted by a few of the Waodoni. At first, everything goes well and one tribesman even gets to joyfully ride in the plane. Upon returning to their camp, the Waodoni decide that the missionaries are a threat and return to the river to massacre them all.

In an act of complete unselfishness, the widows of the men killed, and their children, end up moving in with the Waodoni tribesmen to nurse them after much of the tribe has become sick. Steve ends up even admiring the hard headed Mincayani.

Steve eventually moves back to the United States but returned for the funeral of a missionary woman who lived and died in Ecuador. Once their, Mincayani takes, the now grown, Steve to the spot on the river where his father died. There, he tells him that his father died on the end of his spear and asks Steve to kill him. Steve, although grief stricken by the newsflash, maintains a level head and a compassionate heart and says, “No one took my fathers life. He gave it.” How many idealists are so dedicated to their ideals that they end up giving up their lives for it? An even better question is, how many idealists can recognize the truth, as Steve did?

Unlike most “based on a true story” movies, The End of the Spear substantiates it's plot by showing an epilogue. The real Steve ended up moving his wife and kids back to Ecuador. You see the real Mincayani and Steve on a trip to the United States as Steve narrates some humorous events of the trip.