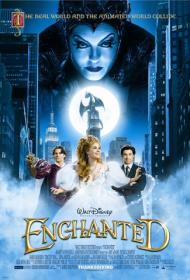 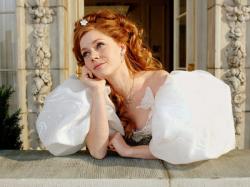 Enchanted is enchanting as it balances the high wire between absurdity and reality. It begins as an animated film, but then becomes a real life movie with occasional brief visits back to the animated world. Each individual part works very well on it's own. Only when mixed together, such as when an animated witch can be seen in a pot of real soup, does the movie seem at all odd.

Giselle is your typical animated Disney princess. She is waiting for her prince to come rescue her and take her off to marital bliss. The prince's step mother however, wants nothing to do with her step son getting married as he would become King and she would lose her throne. Instead of dispatching the Prince, she sends Giselle to New York. A place that the witch describes as having, "no happily ever-afters."

There Giselle meets a single father, Robert, of a 6 year old girl. They reluctantly take Giselle in and it immediately becomes apparent that she is different. For example, she calls out to animals in helping her make a new dress or clean the apartment. She breaks into song whenever the mood hits her. When the prince finally catches up to Giselle in New York he breaks into song to which Robert comments, "He sings too."

The movie shows the simplicity of the princess fantasy. She gets rescued and married to a man she really does not know. Giselle and Robert go on a date and actually learn from each other and thus Giselle experiences love based on deeper terms. It is in Adams' performance as the naive girl that the movie truly finds its core. She plays Giselle as if she is waking up to a world of feelings she never knew existed.

Often funny and always fun, Enchanted is a delightful family film that shows that real life cannot be avoided but a little fantasy thrown in can sometimes help. 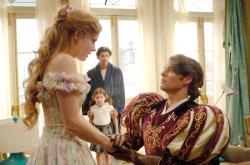 I couldn't agree more, Eric. This movie is enchanting and Adams gives a great performance. Her sincerity is what makes it all work. It would have been so easy to go to far and end up being a parody of the Disney princess, poking fun at all of the conventions of those Disney cartoons. Instead, it's kind of like growing up and facing reality without ever losing the magic. It shows that real love, with all its difficulties is more rewarding than the "true" love of fairy tales.

The movie also makes good use of New York locations. Too many movies substitute other cities thinking they can recapture that New York feeling on the cheap in Toronto or some other city and it never works. Enchanted features scenes all across Central Park, although you can tell that the scenes in Times Square are faked, probably with green screen. You can tell because it shows Bar Code in the background, which has been closed for years. The television series Heroes used the same background, also showing Bar Code. Was there a bargain basement sale on old New York City backdrops? Despite the queen's claim that this is place where there are no happily-ever-afters, this movie does a good job of showcasing the magic that is New York.

A light movie like this doesn't usually generate awards buzz, but Adams is currently receiving such buzz and deservedly so. Why is it only heavy drama gets awards attention? She does as good a job here as any of the other women currently heating up the columns in Variety and the pages of The Envelope. 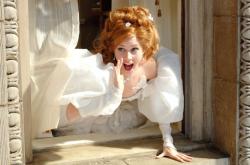 I have to agree with my brothers. Enchanted hits all the right notes. It continues what was, I think, Walt Disney's greatest talent, which was his ability to conjure up our collective imagination. Whatever the setting or time period Disney always found a way to capture how we imagined that setting or time period to look. With Enchanted we see exactly how a fairy princess would look and behave in modern day New York.

Amy Adams is superb. In what must have been an exhausting role, she is never out of character. If you can't appreciate just what a great performance she gives then try spending a day acting as innocent and joyful as her Giselle, with a constant smile on your face and never uttering a discouraging word.

The humor and pacing are flawless. The musical number in Central Park is one of the great "feel-good" movie moments of the year. From the animated opening to the final "They lived happily ever after" spoken by Julie Andrews, Enchanted does indeed live up to its title.