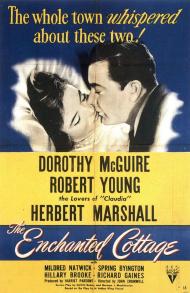 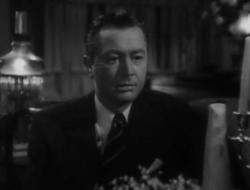 This remake of the 1924 silent version that starred Richard Barthelmess and May McAvoy updates the story from the first world war to the second. Robert Young and Dorothy McGuire take on the roles of Oliver and Laura. She's a homely young woman who gets a job at a seaside cottage that is the only remaining wing of a once stately mansion. He is a dashing young man who plans to spend his honeymoon at the cottage, a favorite spot for newlyweds for more than a hundred and fifty years. Mildred Natwick plays the owner of the cottage. She moved in with her husband 25 years earlier but upon his death in World War I, stopped renting the place to couples.

The setting of this movie is about as romantic as movie settings get. The cottage is the perfect place for a honeymoon. Over the decades many couples scratched their names and the date of their stay on the cottage's windowpane; the windswept seashore clearly visible beyond the ruins and grounds of the once stately country home.

After the initial meeting between Oliver and Laura, he gets injured in the war and comes back disabled and scarred. Because of these injuries he withdraws from his family and fiancée. Oliver and Laura form a bond that quickly blossoms into love and marriage. Then the enchantment of the cottage kicks in. He miraculously heals from his war wounds and the ugly Laura becomes a beautiful swan. Or is this merely Love's illusion?

The story is narrated by Herbert Marshall as a blind pianist neighbor who is fascinated by the cottage and befriends Oliver and Laura. The enchanting musical score and the evocative black & white cinematography add to the mood of this wistful classic. Anyone who has ever been in love will fall under the spell of The Enchanted Cottage.