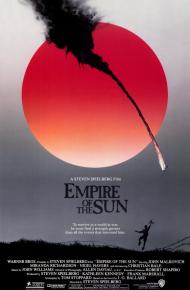 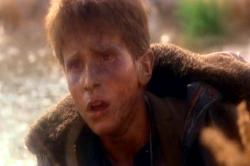 Christian Bale in Empire of the Sun.

Empire of the Sun was based on the semi-autobiographical novel of the same name by J. G. Ballard. It tells of a young boy's coming of age as a Japanese prisoner of war during WWII. At one point David Lean was set to direct with Steven Spielberg producing. The story has similarities to Lean's 1957 classic The Bridge on the River Kwai, which Spielberg had loved as a child. In both movies the protagonist is a British POW who begins to identify with his captors. When Lean decided against directing, Spielberg was happy to step in.

Christian Bale stars as Jamie Graham, a wealthy British boy living with his parents in the Shanghai International Settlement. He gets separated from his parents when the Japanese invade China right after Pearl Harbor. Jim spends the war years fending for himself in this war torn land. For a while he stays at the home he lived in with his parents, raiding nearby mansions for food. Eventually he is forced into internment camps. He crosses paths with a British doctor and several American scavengers. As the years pass Jamie grows into adolescence under these strange and barbaric circumstances.

At one point, from more than a hundred miles away, he witnesses the atomic blast that leveled Nagasaki . He describes it as a white light that was, “...like God taking a photograph.” Bale's performance is truly astounding. He was just 13 at the time but imbues his role with so much wonder and terror and a raw struggle to survive against nearly insurmountable odds. At one point he mentions being unable to remember what his parents look like. It is a very touching moment. Bale is in nearly every scene of this 2 1/2 hour epic and he successfully carries the movie on his young, but quite capable, shoulders. He even speaks Japanese in one scene.

Watch for a young Ben Stiller in a rare dramatic role. He would later claim that it was while filming Empire that he originally hatched the idea for his 2008 war movie spoof Tropic Thunder.

Spielberg's direction, however, seems at odds with the harrowing subject matter. He romanticizes the setting to such a degree that it undermines the veracity of the story being told. There are many scenes where the music swells and we are shown an astonishingly beautiful sunset. In one famous moment Bale salutes several Japanese pilots and they return his salute. It is a very Hollywood moment that belies the reality of the world this kid lives in.

Also the story moves at a snail's pace. I get that Spielberg was trying to be “artistic” rather than “commercial” on this movie but that's no excuse for the many slow, boring scenes the viewer must sit through. It does feature some breathtaking cinematography but the real reason to watch Empire of the Sun is for the tour de force performance by a young Christian Bale. This is one role for which a child truly deserved an Oscar, or at the very least a nomination.