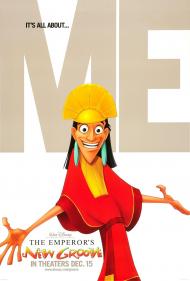 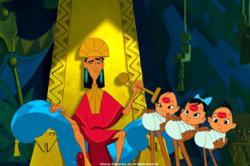 The Emperor's New Groove is a funny, fast paced comedy that is worth an hour and a half of your time. My sons laughed out loud several times. I particularly enjoyed the humor in the drawing. The jump rope scene, with the adviser and her bodyguard, had me laughing louder than my kids.

The movie is basically a buddy, road movie. In this case one of the buddies is a talking Llama, who is actually a spoiled, selfish Emperor. The other is a peasant, whose land the Emperor is going to confiscate, to build a summer home. They learn to get along despite all of the predictable arguments.

There are many surprising things about this movie. There are no cute little side kicks that show up in nearly every other Disney movie. There is no long winded 'looking for something' song. There also is no one to root for. The Emperor/Llama is such a self centered brat that you wouldn't mind seeing the jaguars eat him. The peasant that helps him is such a chump. The Emperor screws him over so many times, yet the peasant still blindly believes his lies, and says since they shook hands he will still help him. Even right after the emperor lets him fall off a rope bridge.

My favorite characters were the conniving, old as dirt adviser, and her squirrel talking, spinach puff making, bodyguard. They steal every scene and all the good jokes are with or about them. The movie should have been more about them.

Patrick Warburton is a scene stealer as Kronk in The Emperor's New Groove.

I wholeheartedly agree with Eric; this is a funny little cartoon. With a running time of just 70 minutes, it flies by. It's a minor entry in the Disney canon, but it is an entertaining one, thanks in large part to a talented cast of voice actors.

As Eric mentioned, this movie differs greatly from other Disney cartoons of the period, not being a musical and feeling smaller and more low key than the big hits of the 1990s. Originally though, it was to be much more like those films. Roger Allers, who directed The Lion King, was assigned to direct this one, but there were story issues that couldn't be ironed out and production fell behind schedule. When Disney refused to give Allers more time, in part because of marketing deals that were already in place, Allers was removed from the project and it was scaled back considerably. Gone went the songs, which were to have been written by Sting, although he does perform one over the end credits that was nominated for an Oscar. Instead of a big budget musical, you have a smaller buddy, road comedy.

I disagree that there isn't anyone for whom the audience can root. Yes, the Emperor is a spoiled brat, but he does show signs of humanity throughout and eventually changes. Pacha isn't so much a chump as just an optimist. Yes, he helps the Emperor after the Emperor lets him fall of a bridge, but what you failed to mention Eric is that after that, but before Pacha helps him again, the Emperor saves Pacha's life. Plus, don't forget that Pacha is also just covering his own ass. If the Emperor does survive and Pacha didn't help him, then the Emperor could easily have him killed, so really it's in his own interest to rescue him.

As I said, the cast is great. David Spade is perfect as the spoiled young ruler. He does egotistical sarcasm better than anyone. His emperor rather reminded me of a Daffy Duck. Goodman is fine, if not outstanding as Pacha. Like Eric, I laughed hardest at Eartha Kitt as Yzma and the always reliable Patrick Warburton as Kronk. Warburton in particular is a scene stealer and gets many of the film's funniest lines.

Maybe this isn't a classic Disney cartoon, but there are worse ways of spending an hour and 10 minutes.

Pacha teaches Kuzco how to work as a team in The Emperor's New Groove.

This is an amusing little cartoon with a fast pace, laughs galore, plenty of action and a nice message about helping others. I agree with Scott that the voice work is superb with Eartha Kitt stealing the show as the wicked old crone adviser to the Emperor. I also agree with Scott about having someone to root for. It was obvious from the beginning that this was a morality tale about the greedy, self-centered Emperor learning what it means to be a friend. Pacha's selflessness eventually teaches Kuzco the Golden Rule.

I discovered a few bits of interesting trivia while researching this movie online.

In the scene where Kuzco and Pacha are searching through the various potions, Pacha reads the labels on them, “Lions, tigers, bears.” When they discover the potion for humans is missing Yzma taunts them with a sarcastic, “Oh, my.” This, of course, is a line from The Wizard of Oz. Apparently the producers hated this joke but were forced to use it by Disney's then head of Feature Animation.

Speaking of Yzma, the producers originally sought none other than Barbra Streisand for the role. Presumably when it was still going to be a big musical. I've often wondered why she hasn't voiced an animated Disney heroine. She could be as glamorous, pretty and young as she wanted without having to put any effort into her appearance.

Oh and this was the very first Disney cartoon to feature a pregnant woman. Pacha's wife is expecting.

The Emperor's New Groove is a fun 70 minutes.