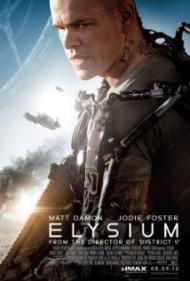 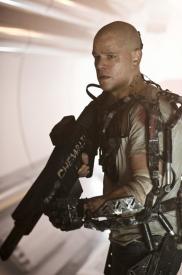 With District 9, Neill Blomkamp created a not so subtle allegory to apartheid. With Elyseum he hits us over the head with a story about immigration reform. As expected, it is a one sided story. All the rich are evil, very selfish and almost entirely Caucasian. The poor, although not depicted as entirely decent, are still shown to be caring of others and a majority of them appear to be Latino.

In a distant future, the Earth has become over populated. The wealthy have all moved off planet onto a huge satellite that seems to be one entirely wealthy suburb. Each mansion, they all live in one, contains a bed that can cure any disease or ailment. They speak English and French on Elysium. Why not?

On Earth remain all of the poor who live in conditions only currently found in third world countries. The story takes place in Los Angeles, although no L.A. landmarks are ever shown. Here Max and Frey grew up as orphans speaking Spanish. Now grown, Max and Frey reconnect after their lives took very different turns. Max is an ex-con who now works at a droid factory while Frey is a single mother working as a nurse at a local hospital.

After an accident at the factory that exposes him to radiation, Max is given five days to live. Of course the rich owner does not care, authorizing Max some pain killers to help him endure his last few days. Max decides to meet up with an old criminal friend named Spider who, for a price, smuggles people onto Elysium.

An early scene shows how this is done.  Spider imprints fake identification onto the illegals arms, so the computers on Elysium will recognize them as citizens. The healing beds do not work on those without citizenship. They then board a ship that takes off and lands onto someone’s meticulous lawn.  One woman is shown running from the ship as droid soldiers collect the other illegals. She breaks into a mansion and puts her sick daughter onto a bed to be cured.

To pay for the ride Max must first help Spider steal some information from Max’s boss. Spider wants access codes and passwords but Max finds he has information much more important. His boss and Elysium’s defense secretary are planning a coup. That information and more gets stuck in Max’s head and suddenly he is a very wanted man.

With some chase scenes and fighting, this film could be billed as an action film. In truth it is merely a political analogy. The action is a distraction, and not a very good one, from Blomkamp’s political message.  Frey’s daughter has a disease that can be cured on Elysium, while Spider sees the information in Max’s head as a way to make all of Earth’s population citizens of Elysium. Like I said, it is not very subtle. Blomkamp puts more into the message than he does into any character development, leaving me uncaring of what happens to enyone.

Science fiction can be a great way to reflect on real social/political issues, but Blomkamp is too one sided for me to take any of this seriously. If he wanted to make a real comment on the state of Mexican illegals entering the Unites States for a better life and medical treatment, he needed to address the issue honestly. The United States is going broke because of welfare handouts. If you do not believe me simply look at Detroit, MI which just declared bankruptcy. The United States balks at allowing unlimited illegals because of the cost to the legal citizens that are already here. Blomkamp naively wrote here that the haves are denying the have nots simply to be mean. If Blomkamp wanted to make a comment on current events and have them taken seriously, as he so seems to, he needed to show the issue from more than one side.

Yeah, District 9 is vastly superior to Elysium. As Eric said, both are obvious political/social allegories but where that earlier movie hit the bull's eye, this one completely obliterates the target. I agree with Eric that this movie demonizes the wealthy to such a degree that it loses any allegorical bite. You can't expect to be taken seriously if you paint your characters with such broad strokes.

It didn't bother me that the majority of the population on Elysium were Caucasian though, since they make up the vast majority of the wealthiest citizens on the planet and this satellite paradise was built and paid for by the richest 1%. I was actually more bothered by the fact that, although they are clearly shown to be in the minority on Earth at this time, they still chose to make the hero a white guy.

Besides the overly simplistic social message that Blomkamp beats the audience over the head with, the details of this dystopian future society don't make much sense. Here are a couple of things I noticed...

The evil capitalist CEO wants to save as much money as possible right? So why then do they use human labor at all? Why not save money and have robots make robots?

And there is no way a technological advance on the level of these miraculous healing machines would be kept limited to Elysium alone. Just think how much money these machines could generate. What evil capitalist would miss out on that opportunity?

Perhaps the most unintentionally funny moment comes when the hacker named Spider gains access to Elysium's central computer system and by simply changing the word “Illegal” to “Legal” he is able to make every single person on the planet a valid citizen of Elysium.

I also found the acting to be lacking. Matt Damon seems a bit stiff and lifeless, and Jodie Foster sounds ridiculous with that horrible French accent. The story plods along and the action scenes aren't all that exciting. And did we really need a little girl dying of Leukemia?

I had high expectations for this movie as the central concept is quite intriguing. With a better execution this movie could have become a sci/fi classic instead of the heavy-handed mess it turned out to be. It is easily the most disappointing movie I've seen in at least 5 years. 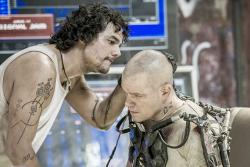 My first reaction to reading Eric's review was that he was probably overreacting to what he saw as overly liberal Hollywood. Having seen the movie I now find myself in fairly close agreement with him. The political analogy is not only weak, it's also illogical. And the action isn't strong or consistent enough to overcome that. Like Patrick, I was massively disappointed.

As Patrick mentioned there are several unanswered questions. The one that stuck out most to me was that we are shown the very, very rich and the very, very poor, but there is no sign of the middle class anywhere. I was also struck, like Patrick, as to why the medical machines were kept so closely guarded. They heal so easily, to the point of magically repairing a human face in seconds out of thin air, that there seems to be no stated reason as to why the rich keep them to themselves. Again like Patrick, I wondered why the robot factory uses human labor and if they do, why not keep one of the medical machines for employee use. A healthy workforce would be much more cost effective than constantly training new employees. The truth is of course that medical treatment has improved for everyone in the modern world, including the poor. Yes, the rich get better treatment than the poor, but the trend has definitely been historically upwards. Why this is reversed here is never explained. It's simply part of the movie's message that all rich people are evil.

Patrick mocked the acting and I agree that it's poor, but it's the writing that is the real culprit. Not only is the dialogue overly melodramatic (the scene where the little girl meets Matt Damon for the first time is groan inducing) but the plot is filled with holes. For instance, why do the citizens of Elysium need a tattoo to be identified as citizens, but after changing one variable in a computer program, everyone is recognized and identified by the medical machines with or without a tattoo?

Damon fails to bring much personality to his part and makes a thoroughly unconvincing action star despite some obvious time in the gym. He just doesn't have the physical presence or charisma so needed to bring a spark of fun to the film. He seems as disengaged from the proceedings as the audience.