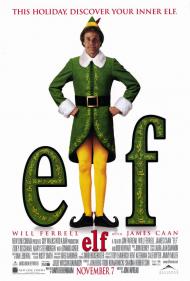 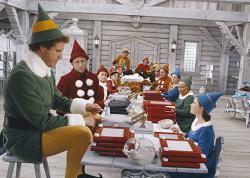 Will Ferrell in Elf.

Christmas movies usually follow one of two themes. The first one is where a character reawakens his faith and or Christmas spirit. This is the theme of It's a Wonderful Life, A Christmas Carol, Miracle on 34th Street, The Santa Clause and The Grinch. The second theme is to show the absurdities and or stress caused by the holidays. See Home Alone, Jingle All the Way, A Christmas Story and A Charlie Brown's Christmas for examples of it. The new Christmas movie, Elf, tries out both of these themes and fails on both accounts.

Will Farrell stars as a human elf named Buddy. He was raised by his adopted elf father (Bob Newhart). Sometime in his thirties, Buddy finds out that he is not really an elf. Santa tells him that his biological father (James Caan) is in New York and encourages him to go visit him.

Buddy is mentally a 6 year old. He gets excited over rotating doors and discarded, chewed gum. He over decorates nearly every room he spends time in. Cut out paper snowflakes are everywhere. The attempt is to make Buddy's childish behavior charming. It does not work. Farrell comes of more retarded than cute.

Caan plays the stereotypical cold, distant father. He is too busy working to pay attention to his family. Schwarzenegger did it better in Jingle All the Way. His redemption at the end of this movie is completely unexplained, and unbelievable. There is also a scene where the entire television viewing New York public rediscovers it's Christmas spirit. It is even less effective than the similar scene in the 1994 remake of Miracle On 34th Street.

Elf has a few funny moments. The scene where Buddy meets a midget is the best. "He's an angry elf;" Buddy quietly says as the short person is beating him up. The chase through Central Park is very well done. The special effects work great in those scenes.

Elf steals from several Christmas classics. When Buddy first leaves the North Pole he does so on an ice flow like Rudolph and Hermy. In another scene he makes like George Bailey. On a snowy night, a depressed Buddy stands on the side of a bridge looking over the side as he wallows in self-pity. Instead of copying ideas from other Christmas movies, Elf should have lampooned them.

The only originality this movie has is a middle-aged guy running around New York in yellow tights wanting to hug everyone. That's just odd, not cheery.

I liked Elf. Yes at first Farrell's Buddy seems like a mentally challenged individual. But after a while I started thinking of him as just a guy raised by elves at the North Pole. He perfectly inhabits the character. He is completely innocent and playful.

No this is not a great movie. But it succeeds at being a funny bit of Holiday cheer and it has its share of laugh-out-loud moments such as when Buddy unexpectedly meets his younger brother after school and embarrasses him in front of his friends. The ending was fun if predictable.

And unlike Eric I think it does successfully lampoon those perennial 60's Holiday television specials. The opening credits alone are priceless. And the North Pole depicted herein is such a perfect recreation of Rudolph that I nearly got varhklempt. 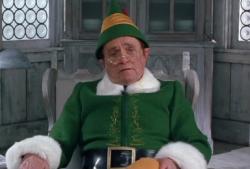 Being a huge fan of Will Ferrell, I was expecting more from this movie. Although there are some very funny moments here and there, the jokes go more for cuteness than straight out laughs.

My opinion of Buddy falls somewhere in between Eric and Patrick's opinions. Like Patrick, I thought Ferrell did a great job of capturing his character's playful innocence, but also like Eric, I couldn't help but think he was definitely mentally challenged. He's supposed to be 30 years old, and while he was raised by elves, none of the elves shown at the beginning of the movie, who are presumably as old as Buddy, show any signs of similar IQ problems.

I do think that this movie would have been better if it had been more a lampoon of old Christmas classics instead of a gentle satire. More time should have been spent at the North Pole before packing Buddy off to New York City. There are a couple of scenes with old fashioned looking stop motion characters that should been featured more in the story.

Cute and funny in parts, Elf should have been more.