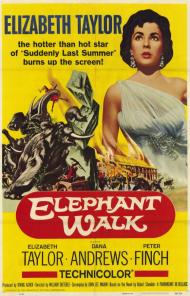 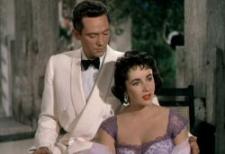 Elephant Walk is a Technicolor Paramount epic, set in the jungles of India. Elizabeth Taylor, stunning at 22, stars along with Peter Finch and Dana Andrews. The three comprise a classic love triangle that plays out against the exotic jungle locale. Taylor plays the young bride of Finch. He is a wealthy planter who inherited a lavish tea plantation in British Ceylon, from his beloved father. All the servants and workers on the plantation, including Finch himself, idolize the memory of his father. In fact the head servant has kept his old master’s bedroom as a shrine.

Into this all male world enters the beautiful, headstrong Taylor. She clashes with the head servant as well as with Finch’s friends. Then when Finch gets injured and becomes bedridden she has an affair with American Dana Andrews. They plan on leaving India together but are stopped by a quarantine due to a cholera epidemic.

Oh yeah, I forgot to mention, the bungalow (which is how Finch refers to the sprawling palace his father built) was intentionally built smack across an ancient elephant trail leading to a river. And Finch’s father also killed the mate of a huge bull elephant. Naturally the climax of the movie involves a herd of elephants smashing through the bungalow.

Elizabeth Taylor, replaced the ailing Vivien Leigh. She had already shot a number of scenes and in fact, in several long shots, it is really Leigh and not Taylor. The melodrama here is pretty mediocre. The best things about the movie are Taylor’s exquisite beauty and the magnificent set of the bungalow. The finale, with Taylor being chased through this palace by a herd of rampaging elephants amidst a roaring fire, is very well done. The final 20 minutes of the movie are by far the best part. Otherwise it is fairly forgettable.