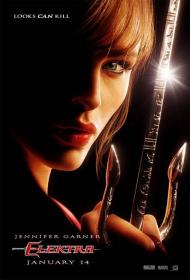 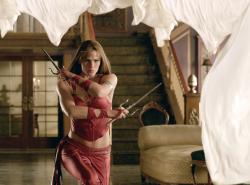 The most important thing that Spiderman proved was that a superhero's alias life is as important to the movie as their superhero heroics. In Elektra we have a kick ass heroine with a completely tired personal life. The action is good and Garner looks great but there is nothing original to be had in this film.

Resurrected from Daredevil, Elektra is now an assassin for hire. While waiting for her next target to be revealed, she gets to know her neighbors, a man and his teenage daughter. Elektra is an introvert but the teen convinces her to spend Christmas with her and her father. Surprise, surprise! Her next target ends up being the man and his daughter. However, Elektra's mother was assassinated and she was raised by her single father and thus she has a change of heart. Instead of assassinating them, she becomes their body guard.

The movie makes a big deal about her resurrection. It reminds the audience no less than three times during the first ten minutes; first during the opening narration, then a character says it and then Elektra has this dialogue exchange with one of her victims, "Don't worry. Death's not that bad," she tells him. "Yeah? How do you know?" He asks. "I died once," she replies.

The movie moves briskly enough along with one mild surprise. It also has some obvious setups. One character's demise is so obvious that the character himself makes a joke about how he knows he is going to die long before he ever does. It is like he was wearing a red shirt on the original Star Trek series.

Garner looks hot in her red leather costume. She is a great female action hero. However, Elektra's only notable personality trait is that she is shy, which doesn't make for much entertainment when she is not kicking butt. 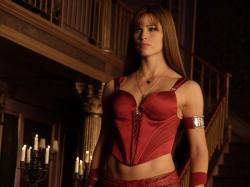 Once again, the charm of Jennifer Garner totally eludes me, but in her defense, the things wrong with this movie have nothing to do with her. The fault lies with the writers who, as Eric said, could come up with nothing better for her to do between fight scenes, but act shy and coy. If this is the case, then why couldn't they show more and better fight scenes?

The most interesting aspect of Elektra's character is that she is the world's best assassin; not a superhero, but a borderline villain. However, after the opening scene, the movie quickly turns her into just another one of the boring good guys. The filmmakers should have been braver and put her dark side in the forefront, shown some other of her missions. If we're going to be affected by her change of heart, we should at least be shown how dark she really is. The opening teases us with her dark side, but then immediately withdraws from it.

Any hope that this was going to be an adult comic book movie was dashed for me when the villains were introduced. They're straight out of a Saturday morning children's cartoon and since they're not human (but demons who's dead bodies evaporate in a puff of green smoke), blood, gore and the nasty implications of Elektra killing so many humans is completely absent. And on top of it all, the film tries to throw on to them some silly mythology that makes little sense and is never fully explained.

Eric mentions that Garner looks hot in her red outfit and yes, she has a nice body, but she looks more like a Victoria's Secret model than a superhero in it. Like in Tim Burton's Batman when Michael Keaton would become instantly unshaven whenever he put on the suit, Garner takes the time to change her makeup and hairstyle before changing into her costume. She also apparently carries her own wind machine with her wherever she goes, because immediately she puts the costume on, a breeze blows up to sweep her hair back in a picturesque manner. Yet for all the sex appeal floating around in the movie, there is no sex or passion.

Following the success of the X-men and Spider-man movies, I had hoped that movies adapted from comic books were finally coming out from the shadows, but then along comes a movie like this one to push them back into them again.