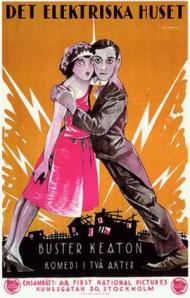 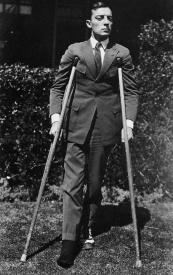 Buster Keaton suffered for his art.

The Electric House was written and directed by Buster Keaton and Edward F. Cline.  It finds Buster once again manipulating his surroundings as if technology was merely a toy and he a big kid with an imagination.  It is a showcase for Buster's fondness for mechanical devices.

Buster plays a college graduate with a botany degree.  At commencement he is accidentally given a diploma in electrical engineering.  He is then hired by the dean to re-wire his house with modern electrical gadgets, while he and his family are away on vacation.

When the family returns, Buster gives them a tour of their home filled with such innovations as a train set that serves dinner.  It includes a dish washing machine, which (according to WIKI) were first installed in homes in the 1920s.   The escalator stairs are the cause for the funniest scenes.   The family is properly impressed.

The student who actually graduated with the degree in electrical engineering is upset that he lost the job to Keaton and decides to re-wire the house.  Havoc ensues as everything that worked so well at first, is now causing all kinds of problems.  The escalator not only takes you upstairs, but it goes so fast that it flings you out a window and into the pool.

This is a very inventive short and Keaton was such a perfectionist that he shot it twice.  He broke his ankle filming the escalator scene in 1921, and put the film on hold.  When he returned to it the next year, he scrapped everything he had filmed the first time and started completely over again.

Buster Keaton was the master at using technology and gadgets to sell a joke or story.  The Electric House suffers in that most of the jokes are merely the gadgets.  Some work, but not enough.  My favorite is when Keaton tries several times to make it up the stairs.  The second half is the better half but there is not really any character or plot to latch onto, other than the imagination at what they created, which by modern terms are now very quaint. 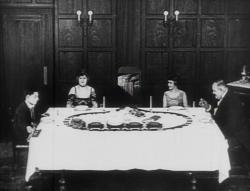 Buster Keaton and cast in The Electric House.

It has frequently been pointed out on this site that later animated shorts borrowed liberally from silent comedies. The Electric House certainly inspired those automated Houses of Tomorrow cartoons that were popular in the 1950s. I agree that the escalator-for-stairs provides some of the funniest moments in this just so-so Buster Keaton two-reeler. Once again he displays his uncanny physical dexterity as he somersaults his way up and down the moving stairs.

I also chuckled at the moving bathtub and the miniature train set that brings the food dishes to and from the dining room table and the kitchen (see photo). Of course any scene involving a train set has to include a derailment and Keaton doesn’t disappoint as one of the women gets a lap full of dishes. The slapstick antics include Keaton mistaking a person under a sheet for a ghost, a gag that was already tired in 1922.

I actually enjoyed the first half more as Keaton proudly displays his electrical innovations. The 1920s was the first truly modern decade in terms of Americans being plugged-in. Besides dishwashers, air-conditioners, refrigerators and radios all began popping up in affluent homes across the nation.

The second half, where the real electrical engineer seeks revenge, is predictable. You know in advance just what will go wrong with each household invention. Swimming pools and attempted suicides - not necessarily together – both played a recurring role in Keaton’s comedies and both show up as gags here.

The Electric House is not Buster Keaton at his best but like even his most uninspired films it contains glimmers of genius. 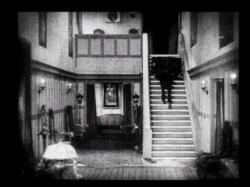 I agree Patrick. I thought the first half was better also. The first half sets up the situations so clearly that the punchlines are telegraphed way in advance. You know that every single device will go wrong and it's pretty obvious how. This is definitely one of Keaton's lesser shorts.

There are some clever ideas. The escalator is good for a few laughs, especially when he's carrying the trunk up it while it runs in the opposite direction, but it's not the first time one had been used in a comedy. Chaplin used one for laughs in 1916's The Floorwalker.  Likewise the train delivering food is worth a chuckle, but you know from the second it rolls out that it will get derailed. The sliding doors reminded me of Star Trek. The electric pool table that reloads the table at a press of a button is actually pretty cool.

While Keaton looks a bit too old to be a student, Steve Murphy looks WAY to old to be one. He has such a small part, couldn't they have hired someone more age appropriate?

I think you nailed the real problem Eric, which is that there's no character to speak of. I was never really rooting for Keaton to succeed. He's a botanist who ends up installing electricity. Why not make him an aspiring electrician who really needs the money to support his family? The other electrician could be his competition and if Keaton doesn't succeed then his family won't eat. Then, I'd have been rooting for him.