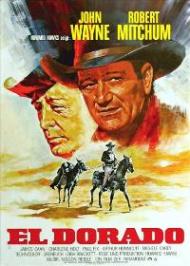 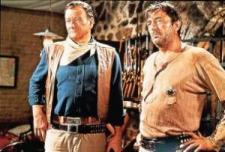 Although the source material for El Dorado is a novel by Harry Brown, and Rio Bravo is based on a short story by B.H. McCampbell, they are surprisingly similar. Both film’s screenplay were written by Leigh Brackett and El Dorado is practically a remake of Rio Bravo (1959).

John Wayne plays a man caught up in a range war. After turning down an offer to join the bad guys, the Duke teams up with a drunken sheriff, Mitchum, and a young man, Mississippi, played by Caan. In Rio Bravo, the drunk sheriff was played by Dean Martin and the young guy’s name is Colorado, played by Ricky Nelson. In both films the three main characters, and an old timer, barricade themselves in a jail house.

This is not one of Wayne’s best pictures. The plot spends far too much time setting itself up. Wayne wanders around a bit and the first part of the movie covers several months. Early in the movie Wayne gets shot. My favorite joke is after the doctor treats him, he is in a hotel run by a woman that he and Mitchum both like. The woman says Wayne can stay there, because the doctor said he should not be moved and bounced around. Mitchum, jealous that Wayne will be near the woman, offer his place saying that if Wayne slept in his extra bed he certainly would not get bounced around. Wink, wink, nudge, nudge.

Caan plays the side kick well enough. He makes Wayne look good and many jokes are made about his name and hat. After Wayne tells Mitchum his full name, Mitchum says, “Well, no wonder he carries a knife.” When Mississippi tells Bull that it is in fact a hat that he is wearing, Bull responds, “Well, I'll have to take your word for it.”

Without any surprises, El Dorado will satisfy Wayne fans only. He commands the screen and is always impressive to watch. His paralysis scenes show that he could actually act and was not just a one note movie star.