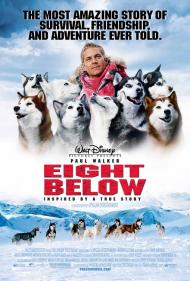 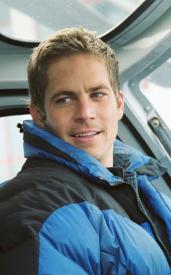 Paul Walker in Eight Below.

I am far from being an “animal” person and usually do not seek out animal movies. Too often, Hollywood films about animals go to great lengths to exploit the animal’s cuteness or worse, make them human like. Any time an animal outsmarts a human in a film, it loses me. As great of companions as pets may be they are still driven by instinct and habit, not rational thought.  Refreshingly enough, Eight Below treats the dogs in question, for the most part, like animals.

Paul Walker plays Jerry, a sled dog team owner in the Antarctic. The dogs get left behind in the Antarctic when Jerry and another man must be evacuated due to a medical emergency. Jerry cannot return directly for the dogs as winter sets in. Before leaving, he informs them, “I'll be back. I promise.” The dogs must survive on their own in the bitter cold while Jerry pines for their safety and carries the guilt of having left them to almost certain death.

Paul Walker does a convincing job as Jerry. Walker, although not a notable actor, certainly has screen charm. Jerry’s love for his dogs is evident in the way he calls them his kids. He talks to them as if they understand each other but thankfully it never becomes to cloying.

Jason Biggs is around as a comic sidekick but he has very little to do but comment on his fear of flying and his dislike for being licked by a dog. “Oh! That's disgusting! I got dog spit all in my mouth and my nose and my face... ugh!”  Lucy did it better in Peanuts.

The ending of Eight Below is not a surprise as you can plainly see where the movie is going the entire time. Waiting for that moment of truth is what keeps you watching. Although that final scene could have been milked for more tears, it does play well enough to evoke feelings for Jerry as well as the dogs. I may not be an animal person but that does not mean I cannot empathize with someone who is.