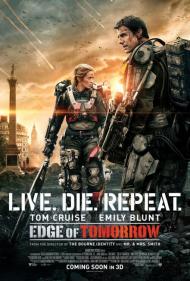 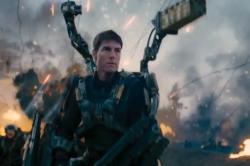 Tom Cruise in Edge of Tomorrow

With Edge of Tomorrow, Tom Cruise plays military PR man Major Cage, a variation of his lawyer character in A Few Good Men (1992). Like Lt Kaffee, Cage is at first full of himself having found an easy military career that requires very little effort and no danger. Whereas Kaffee was forced into a real court case, Cage is forced into actual combat with an aggressive alien race.

While in a beach landing battle that resembles D-Day, Cage kills a particular alien that attaches Cage to the main alien being and forces him into a time loop. Every time Cage is killed, he wakes up 24 hours before he gained the power. He does not understand what is happening until he comes across a famous soldier, Rita, played by Blunt, who knows what is happening to him. She tells him, “Come find me when you wake up!”

He finds her and she trains him in combat and informs him on his abilities. She gives him this warning. “Now listen carefully. This is a very important rule. This is the ONLY rule. You get injured on the field; you better make sure you die…Last time I was in combat, I was hit. I was bleeding out, just not fast enough. I woke up in a field hospital with three pints of someone else's blood and I was out. I lost the power, do you understand?” Together, Cage and Rita relive day after day battling aliens, with Cage's skills increasing, and affections developing, as they get closer and closer to defeating the enemy.

Although I enjoyed the action, special effects and humor, Edge of Tomorrow did fall into some science fiction traps. Cage learns that if he can kill the main alien being, all of the other aliens will die, just as Will Smith destroyed a mother alien ship in Independence Day (1996), killing all of the others. The biggest question mark is with the ability. Rita explains how she lost the power, but the only real way to know that she lost it would have been for her to die and not come back but of course that would have ended the story. You have to accept that she and Cage just know when they do and do not have it.

As this is a science fiction film, we can excuse such plot points. After all, this is about the action and spectacle. It also makes reference to the most important battle of World War II, the invasion of Normandy as well as one of the most important of World War I, The Battle of Verdun. The scene where Rita and Cage take refuge in an abandoned French barn could have taken place in either of those wars.

Edge of Tomorrow is not completely original but enough of it is to make for an utterly entertaining watch. 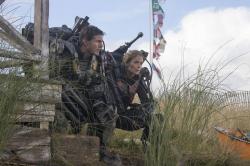 Tom Cruise and Emily Blunt in Edge of Tomorrow.

Like Eric, I found this movie to be quite entertaining. Sure it borrows ideas that have been used before but what movie today doesn't? It was based on a 2004 Japanese novel by Hiroshi Sakurazaka called All You Need Is Kill. The story unfolds quickly and it draws the audience in with its intriguing setup. Edge of Tomorrow contains a nice mix of action and humor and the focus stays mostly on the two stars. The supporting cast of characters includes the usual motley group of suspects found in war movies but it is really only the two main characters that are shown to be more than just one dimensional stereotypes.

Most of the humor comes from the fact that Cage is reliving the same day over and over while it is all new to everyone else around him (with the exception of Rita of course). Little details like him knowing there is a poker game going on under a blanket, and how many fingers someone is holding up behind their back are used for humorous effect. Cruise and Blunt have decent chemistry together. In one scene he jokingly asks if she's tried having sex to get her reset ability back.

The futuristic battle scenes are quite impressive. The recreation of the D-Day invasion was a great idea. They took an iconic battleground and added a science fiction twist to it. The aliens themselves are nothing special though. They are fairly generic looking and nowhere near as frightening as the creatures in the Alien movies, for example.

Tom Cruise has been one of the biggest movie stars in the world for more than 30 years. He is a Hollywood icon with the staying power of John Wayne or Clint Eastwood. He's 52 but looks at least 10 years younger than that and his career shows no signs of slowing down. With Edge of Tomorrow (his 38th motion picture since his debut in a bit part in Endless Love way back in 1981) he proves he's still got what it takes to play leading man/action hero in a big budget sci/fi flick. His cocky charm creates a character you root for and his insistence on doing most of his own stunts is now legendary.

Edge of Tomorrow is solidly entertaining, even though the climax was a bit less impressive than I was expecting. While far from a masterpiece it is better than most summer popcorn movie fare and it proves beyond a shadow of a doubt that Tom Cruise remains a great star with many good years ahead of him.

Emily Blunt in Edge of Tomorrow.

For decades now Hollywood has struggled to make a good movie based on a video game, but Edge of Tomorrow feels like the first successful one, even though in reality it isn't based on a video game at all, but rather a novel as Patrick mentioned. Still, there's no denying the video game structure of the plot. Every gamer knows exactly how Cruise's Cage feels as he experiences the same events over and over again, learning and memorizing the actions of the enemy and the geography of the battlefield, dying repeatedly, but advancing further (hopefully) each time until the final face-off with the boss-monster.

The set-up to the plot seems slightly complicated at first, except for the techno-babble explanation of how the time travel works, the plot is actually quite simple and yet quite entertaining. This is thanks mostly to Cruise and Blunt who I agree share a nice chemistry. The romantic sparks never really fly, being somewhat limited by the plot structure, but Cruise is able to make us believe that he has fallen hard for Blunt's character. It's in the lighter training scenes where the two of them really play off of each other. The many and varied ways Cage dies, quite often by Rita's hand, provide many of the best jokes.

I agree with Patrick that the aliens aren't particularly memorable. The CGI is well done, but they lack personality and weight. They don't provoke an emotion like fear or hate. Their defeat is just a task that must be accomplished. Also the fact that for most of the movie you know that the day will be reset no matter what happens, does remove some of the tension, even if it doesn't remove any of the entertainment.

Cruise does still have what it takes to play an action star and he's even able to give his character a little depth, at least at the beginning when he starts out as a coward who will do whatever it takes to get out of going into battle. By the end of the movie he's become the hero we knew he would become all along. As entertaining as he is here, it would be nice to see him try and stretch his acting muscles again sometime. The parts he's played lately are fine and the movies entertaining, but once upon a time it seemed that he was interested in being taken seriously as a dramatic actor, whereas now he's content making blockbusters like this one. I hope he puts a few of those good years left to him to good use.

Like my brothers, I found this movie to be highly entertaining. It's a fairly lightweight, but high quality summer movie. The kind you can just sit back and enjoy while you munch your popcorn.