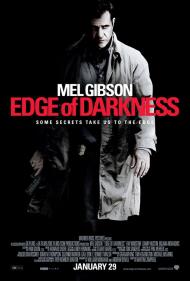 Shawn Roberts and Mel Gibson in Edge of Darkness.

After a seven year absence from starring roles, Mel Gibson returns in Edge of Darkness. Playing a vengeful father, Gibson is back to the violent type of roles that made him famous.

Veteran Boston police detective Thomas Craven is excited to have his only daughter home for a visit. Her sudden murder sends him on a quest of investigation and vengeance. Although at first he thought he was the intended target, he soon learns that his daughter was involved with exposing the company she was interning at. He starts with her boyfriend and friends but his investigation soon leads to a CEO and a United Sates Senator. Also in the picture is a behind the scenes government operative, Darius Jedburgh. His job is to destroy the evidence that leads to any government involvement.

The movie is filled with dramatic scenes that end suddenly with a blast of action. This makes for a roller coaster pace. Some times the film seems dragged out pointlessly. Craven meets his daughter's boyfriend, who obviously knows something. He does not want to talk so Craven lets it go, only to later have him spill his guts. It made no sense that Craven did not handle the first meeting differently.

Although this movie has some truly great moments, it is saddled by an uneven pace and a plethora of characters. What is in essence just a murder mystery expands to include government conspiracies. From an underhanded Republican Senator to a treacherous tree hugger to a lawyer, Edge of Darkness throws a sea of suspicious characters at the lone honorable cop. The odds are stacked against him, but as last years Taken showed, never underestimate a pissed off father.

Gibson can only play a limited number of characters. Luckily, Craven is within his range, and he pulls off the drama as well as the action scenes. His best line is when he is talking to a cop who may or may not be on the take, "You had better decide whether you're hangin' on the cross... or bangin' in the nails." Welcome back Mel! 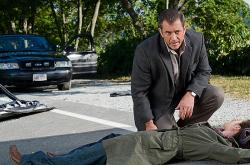 Mel Gibson in Edge of Darkness.

The real problem with this movie is that the central mystery is actually very simple, but the plot over complicates it by introducing unneccesary characters and plot points, which in turn draws out the running time, thus reducing the tension.

In one scene Craven goes to visit the leader of the Eco group, Night Flowers, and beats him up for information, but we're never even told what information he gives or why it's important.  And as you mentioned Eric, why does it take two visits to his daughter's boyfriend to get the information that could have been gathered in one scene?  It seems as though the director and editor were deliberately slowing the story down.  Maybe they wanted it to seem more complicated, when really it's just a simple cover-up.

Gibson is okay as the serious man on a mission, but he loses most of his charm in the process.  He never gets to use his cocky grin once.  Perhaps his greatest strength in the part is that he keeps it believable even in the story's most violent parts.  You truly believe that this is a man with nothing to lose and someone who will do what it takes, no matter what.

I also enjoyed Ray Winstone's character as the mysterious problem solver who slips in and out of the story.  He's clearly a man with a dark past and his mystery is deepened by the lack of details of his past, but I still wanted to learn more about him.

Gibson has made more news recently about his off camera life, but this movie proves that despite its weaknesses, he still has plenty to offer on camera.

Like you Scott I thought Ray Winstone’s character was the most interesting person in the movie. He should have had more screen time. His big scene at the end was the best moment in the entire movie.

Gibson is good here although I agree that the tone of the movie is unrelentingly dark. A few moments of levity with Gibson’s famous shit eating grin would have upped the entertainment value considerably.

Like you both pointed out the plot is really quite simple but presented in an overly convoluted manner. The pacing is methodical and the ending a bit of a downer.

I did appreciate the level of realness in the action scenes and in Craven’s motivations. Like John Wayne and Clint Eastwood before him Mel Gibson has gained more presence and gravitas with age. His craggy face and throaty cigarette voice are perfect for this type of role.

Eric, I too loved the line you quoted. It was tailor made for Mel – Passion of the Christ – Gibson and he delivers it with absolute conviction. Too bad the rest of the script didn’t contain dialogue as juicy and memorable.