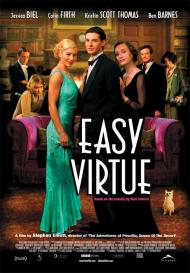 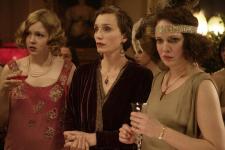 I've never been a fan of Jessica Biel. Sure, she's attractive enough (although her mouth is a little scary big), but the real problem is that she'd never appeared in anything that I liked, until now. I still won't say that she's a great actress, but I enjoyed her performance here as the central character in Easy Virtue, a movie based upon the 1926 Noel Coward play.

Biel plays Larita, a free-spirited, American race car driver in 1926. She marries John Whittaker, the son of an old, rich English family to whom John takes her home to meet. The Whittakers are shocked by John's choice, all but his WWI shell-shocked father who rather approves of Larita, and don't hesitate to show it. John's mother (Kristin Scott Thomas) in particular is disapproving, she'd hoped that John would marry the daughter of their neighbor so that the estates might be joined. The plot is really just that of a drawing-room comedy as the Whittakers and Larita spar back and forth as they feel each other out.

The cast is universally superb. Apart from Biel and Scott Thomas, you have Ben Barnes (best known as Prince Caspian in the last Narnia film) playing the clueless new husband, Colin Firth as the morose Whittaker patriarch, Katherine Parkinson (The IT Crowd) as the mousy daughter Marion, and Kris Marshall (My Family) as the put-upon butler.

Much of the humor of the movie comes from the battle of wills between the old Mrs. Whittaker and the new. The range of weapons is extensive, although subtle and most are delivered with biting wit. Flowers are employed as weapons and in the movie's most memorably funny scene, the family dog is caught in the cross-fire with uncomfortable, but hilarious results.

The idea that a group of repressed people being visited by a laid-back individual with unexpected results is an idea that's been done many times. What I like about this movie is that, without trying to give anything away, Larita doesn't just show up, melt a few hearts, and then suddenly the repressed, stiff-upper-lip British family has embraced her and let down their hair. I'm thinking of movies like that other Colin Firth film, What a Girl Wants. By the end of this movie, most of the Whittaker family is exactly the same as when it started.

Breezing through other reviews of this movie on Rotten Tomatoes, I see that most of the criticism tends to be an unfavorable comparison to the original play. I've never seen or read the play, and perhaps that's the secret to enjoying this movie. Or, if you have read it, put it out of your mind and try to enjoy it on its own without endless comparisons.

Jessica Biel and Ben Barnes in a Frazer-Nash BMW.

I am likewise not a big Biel fan. She is fairly forgettable as an actress. She does however, work that dress in the tango scene. This is her best film.

My favorite character is the butler Furber. He has several good moments. In one scene he casually catches a telescope. In another he nonchalantly tosses a hat onto a statue. He barely hides his disgust for the Matron of the manor. After the family arrives home from a review in which Larita and Hilda danced the Cancan, and the women are yelling about Larita, Furber says sarcastically to her as she walks last through the door, "The advanced notices are sensational."

Some of the best jokes are about the diversity of a working class American marrying a British land owner. At one point John says to Larita, "Do you have to be so loud?" to which she responds, "Of course I do. I'm American." My favorite line of Firth's is When his daughter tells him that she does not feel like smiling and he says, "You're English dear, fake it."

Adding to the fun is an interesting soundtrack. It features songs of the time, such as Cole Porter's "Lets Misbehave." It also has songs that would not be written for some 50 years, like 1976's "Car Wash" and Billy Ocean's "When The Going Gets Tough, The Tough Get Going." They are sung in the style of the Jazz Age.

Easy Virtue is a good dialogue driven comedy, with some elements of drama. The mystery of Larita's first husband plays out nicely. The weak area for me is that of Colin Firth's distant patriarch. He mopes around not really caring about much of anything. His final scene is more questionable than satisfying.