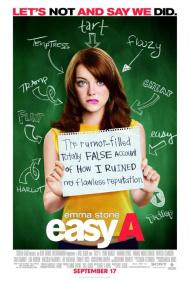 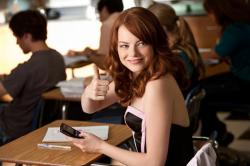 Emma Stone deserves an Easy A, but the rest of the movie only gets a hard C.

Stone is Olive, a high school girl who lies about losing her virginity and is suddenly the talk of the school.  A gay male friend of hers decides to play on her new found slutty reputation by convincing her to pretend to have sex with him so that people will think he's straight and stop harassing him.  This leads her into a new line of business of being a pretend whore where she pretends to make out (to varying degrees) with a bunch of guys for money or gift cards.  This alienates her friends and pisses off the school's religious group led by Marianne (Bynes).  The only people it doesn't concern, even when the rumors include a venereal disease, are Olive's parents who seem oddly cavalier about the whole thing.

As I watched this movie I felt at varying times as though I was channeling my brother Eric.  He's often taken Hollywood to task in his reviews for their treatment of conservatives and religious types as well as for their portrayal of parenting.  I don't always agree with him, but with Easy A, I definitely do.

If an Islamic group was treated as a stereotype the way the Christian group was treated as a stereotype in this movie, you'd hear clamoring from D.C. to Florida.  If a Jewish group was treated this way, the director would be branded as antisemitic.  In Hollywood, you are always allowed to poke fun of Christians as this movie does.  The sad part is that none of it is all that funny or original.  Bynes' (who just a few years ago was starring in her own movies, but is now playing this horrible bit part?) character is such a hypocritical cliche that it's almost pointless and only occasionally amusing.

What's never addressed in this movie is just why Olive feels the need to behave in the way she does.  Why is she crying out for attention?  Why does she go to such extremes to make the whole school think she's a prostitute?  I almost said slut, but when you're getting paid for it, it's prostitution.  Could it be because she has two horrible parents?  They spend the whole movie acting as if they're Olive's friend and trying to banter with her.  Her mom tells her about when she used to be a slut.  At one point her mom says, "I don't want to judge you, but..."  Isn't that her job as a parent?  To judge her child and tell her when she's crossed a line?  And not to share sex stories with her? Cause you know, she's not just her mom, she's her bestest BFF.

Okay, maybe I digress, and as I'm often accusing Eric, maybe I read too much into this movie. It wants to be a lighthearted high school movie and it succeeds occasionally.  There are definitely some funny moments, but will it be remembered in 25 years the way Sixteen Candles or The Breakfast Club are?  I doubt it.

The false Christian and the false whore.

Olive's poor decisions to help others reminded me of an incident from high school.  Patrick and I got a ride home from school with another student we barely knew.  He broke the speed limit trying to show off.  A police car saw us and gave pursuit.  As soon as our driver pulled the car over he looked at me scared to death and asked me to help him out as he had no license.  We quickly traded seats.  As soon as the officer walked up to the car, it dawned on me that I just did something very stupid, and told the driver he had better confess.  He did thank God.  Like Olive, I thought at that second that I was doing the right thing by taking the blame for someone else.  In hindsight I wonder what the hell was I thinking.

Will Gluck wrote the screenplay, and he goes in a couple of different directions.  He goes old fashioned with the scenario of a high school girl becoming a somebody because of rumors of her supposed sex life.  Too often television shows and movies have all high schoolers having all kinds of sex.  In real life it is not so.  Some kids do, some kids kind of do, and some kids do not.  His approach to the "virgin" Olive is nicely refreshing, although unoriginal.  This storyline was already done on an episode of The Facts of Life when the fat girl let everyone think she was having sex.

His characterization of the Christian Marianne is stereotypical liberal Hollywood.  In an interview with moviefone.com he said,  "It's not that she's Christian; it's that she's a zealot. That's the most important thing. I like exploring characters that are extremely confident in their belief system, very "holier than thou," but can't really answer any questions about the genesis of their belief system."  In other words, he wrote Marianne as a self righteous, ignorant Christian bitch.  She seriously defends her 21 year old high school boyfriend by saying, "If the Good Lord had wanted Micah to graduate, he would have given him the right answers."  Christians only appear in Hollywood movies these days to be the butt of jokes.

Gluck tries to explain that Olive, a smart student, soils her reputation because she empathizes with other kids not feeling accepted by their peers.   However, she only helps because she gets paid.   As Scott wrote, taking a financial payment for sex, or the assumption of sex, is prostitution.  She is not the heroine she thinks she is.  I felt no pity for her.  Marianne is a gossip, but Olive initiates all the rumors.

None of the male characters have any personalities.  Gluck should have done so much more with Todd.  Had him admit to Olive that he was a virgin and a little disappointed that she was acting otherwise.  Or have him be the guy that tries to pay her for sex.  Either would have had a more emotional comeuppance for Olive than what Gluck came up with.

As a parent of teenagers, I was offended by the apathy of Olives parents.  Ojai is a small town, and even if they did not hear the rumors, any half concerned father would have stopped his daughter from going to school dressed as a slut.  The female school counselor is banging a male student.  Of course it is one of the Christian kids.  The principal is cynical.  "This is public school. If I can keep the girls off the pole and the boys off the pipe, I get a bonus."  I guess kids raise themselves in Ojai.

Mr. Griffith is the only adult voice of reason, "I don't know what your generation's fascination is with documenting your every thought... but I can assure you, they're not all diamonds. "Roman is having an OK day, and bought a Coke Zero at the gas station. Raise the roof." Who gives a rat's ass?"  Unfortunately he gets shit on as his wife is the school counselor.

Like myself, I am sure many people made bad decisions when they were teenagers, but none of these characters are anywhere near relatable.  I knew right away I was making the wrong choice.  Olive drags out her bad decisions pointlessly. 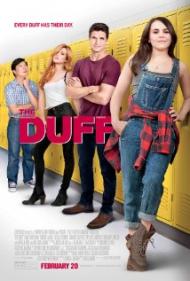