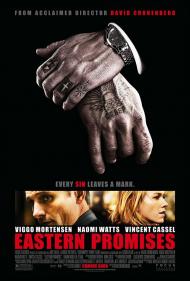 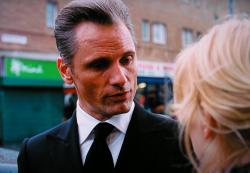 Eastern Promises will probably be remembered most for the nude fight scene featuring its lead, Viggo Mortensen. Although to only focus on that would be to lose sight of what a great movie it is overall. It is definitely one of the best movies of the year so far.

British mid-wife Anna Khitrova (Watts), is present at the birth of a mystery baby. The mother dies giving birth, leaving behind only a diary written in Russian. Anna, who is of Russian descent herself, is led by a business card in the diary, to a Russian restaurant in London that is run by the Russian mob. There she meets Semyon, the kindly, grandfatherly owner, who beneath his sweet appearance, is actually a vicious killer and head of this mob family. He tries to sweet talk Anna into leaving the diary with him so that he can translate it for her. Anna however, only leaves him a photo copy.

Mortensen plays Nikolai, a low level Russian mobster working for Semyon's son. He is smitten with Anna at first sight and you can see that despite her misgivings, she is equally infatuated. Nikolai comes off as a man with secrets. You can tell that he is more than just the driver he proclaims himself to be. While Anna searches for the truth behind the baby's mother, Nikolai is soon on the fast track to becoming a Mob captain. And, as you would guess, their two storylines come to a head by the movie's climax.

Also, as you would expect from director David Cronenberg, the movie is bloody and violent. There are throats cut, stabbings, forced prostitution and even some corpse mutilation. This is not a movie for the squeamish, but if you have the stomach for it, the violence only adds to the movie's intensity.

Viggo, is terrific in the lead role. Well known for throwing himself into his parts, he apparently spent some time in Russia, just driving around on his own, without a translator, to prepare himself for this part. I don't know how much that actually helped, but it might have done something, because he buries himself in the part in a very convincing way. Watts is also good, but she has the much less splashier role.

As for the nude fight scene, while you might think it's a gimmick to have the lead actor fighting two guys in the nude, it's actually filmed in such a way as to be very effective and not at all gratuitously. I mean let's face it. We've all seen so many fight scenes in movies, we can't help but be a little numb towards them. Here though, I at least, found myself wincing along with every blow he received. There's something about the added vulnerability of being nude that makes the fight seem that much more dangerous.

My only complaint is that the ending, which has a twist, is a little obvious. I could see it coming and so it took away some of its bite, but is still delivered well enough that I enjoyed watching it play out anyway.

If you enjoy a good mob movie (and who doesn't?), then you'll enjoy Eastern Promises, which delivers a great one. 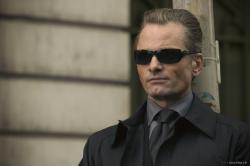 It used to seem to me that Viggo Mortensen was an actor whose career has solely relied on his look. In his early movies, like Witness and Crimson Tide, he was just a good-looking face. As he has aged his face has developed character. His face has stories written on it. His wrinkles are badges of time. This helped immensely in his portrayal of the worldly Aragorn in The Lord of the Rings. It also adds dimensions to his role as the mysterious Nikolai.

As Scott wrote, Nikolai has secrets, and one look at him and you can see a man with a past. Not only does Viggo’s face contribute to the role but he also carries himself in such a manner that speaks of being more than meets the eye. This is the best acting I have yet to see Viggo do. With this movie and A History of Violence, Mortensen and David Cronenberg prove to be a great movie making team. I hope they have plenty of collaborations yet to come.

Scott wrote that the plot twist was obvious. For me it was not quite so obvious, but once it showed up it disappointed me. Has not that angle already been done in numerous films? Still, this is a well put together film and deserves some awards. I especially hope Viggo wins an acting award for his portrayal of Nikolai. It would be a shame to have this movie only remembered for Viggo showing the world his penis. 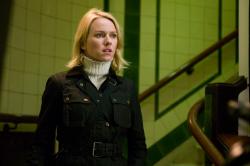 Eastern Promises is somewhat like a Russian version of The Godfather. Only the Russian mob, as portrayed here, is more brutal than the Corleone family ever was. In fact, brutal is the word which best describes this movie. The violence is visceral and extremely graphic. The nude fight scene is one of the most realistic I've seen in any movie.

I agree that Viggo is good. He buries himself in the part. Like Eric, I didn't see the twist coming. But unlike Eric I enjoyed it. Nikolai's personality and actions don't make sense until you know who he really is. Only then can you truly appreciate what kind of man he is.

I like thrillers that remain true to real life. The climax here is gripping without being over-the-top. There are no impossible fight scenes or car chases. It is a thinking man's gangster picture with a talented cast and a veteran director still at the top of his game.