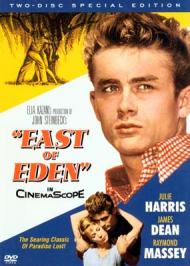 James Dean in East of Eden.

East of Eden is based on the second half of John Steinbeck's allegorical novel of the story of Adam and Eve after they were expelled from the Garden of Eden. In this movie, Eden is a ranch they use to live on, and instead of Cain and Able, their sons are Cal and Aron.

The plot is essentially two brothers competing for the love of their father. Aron is the "good" son. He has a girlfriend, Abra, whom Cal, the "bad" son, secretly yearns for. Their mother is long gone and believed to be dead. That is until Cal finds that she is running a whore house in a nearby town.

After their father loses a bunch of money on a business venture, Cal gets the idea that he will gain favor with his father if he can raise the money he lost, and present it to him as a birthday gift. First he needs some investment capital to start his plan rolling. He gets it from his mother whom he discovers has a few things in common with him.

Meanwhile, World War I starts and their dad becomes in charge of the draft board. The war also means that Cal’s bean crops will go up in price. The sensitive Aron becomes bothered by the war and how a German neighbor gets picked on. He also starts to notice that Cal and Abra are growing closer.

The movie climaxes in an emotional scene of Cal trying to give his earnings to his father only to be trumped by Aron’s news of his engagement to Abra. This is Deans big crying scene. He plays it as if he is one big opened, emotional wound, gushing blood from his soul. This movie has plenty of good things going for it but it is James Deans performance that keeps this film in circulation.

As in the bible, Cal betrays Aron. Here he does it in the form of taking his "good" brother to see his "bad" mother, whom Aron has put on a pedestal. Davalos has some intense scenes at the end of the movie, but he is no James Dean, and as such he is severely over shadowed. Harris fairs better. She and Dean share a couple of good scenes. The best being when he is on her roof talking to her through the window.

East of Eden was released in the spring of 1955, it was the only movie James Dean would ever see premiered. He died that fall before the release of Rebel Without a Cause. He left this earth not knowing the amazing impact his films would have on a generation, or just how famous he would become. 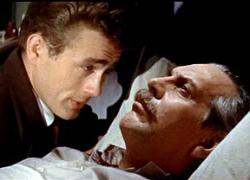 James Dean and Raymond Massey in East of Eden.

East of Eden sometimes get overshadowed by Rebel Without a Cause or even Giant but it contains James Dean's most raw performance and Cal Trask is his most complex character. He looks as innocent as a cherub but he's in constant emotional turmoil. Dean's climactic scene with Massey, that Eric wrote about, is absolutely brilliant. As written in the script, Dean was supposed to turn away from his father in anger but Dean followed his instincts and instead embraced Massey. It makes the scene much more powerful and anguishing.

The generation gap between sons and fathers is a theme that crops up in all three movies in which James Dean starred. This particular scene is the first time many American teens witnessed an actor on screen in which they saw themselves reflected. He became a lightning rod for outcasts and loners everywhere.

I had never thought about it before but James Dean's screen image was in some ways like a male version of Greta Garbo's. They were both impossibly beautiful and oh so tortured and both their careers proved ephemeral, although their legends have endured.

Elia Kazan makes great use of CinemaScope to frame his shots. He proves himself in the same league with David Lean in this regard. He also demonstrates a fine eye for color. One image that stands out in my mind is where Dean is swinging on their backyard tree swing on the left side of the screen. Massey, standing on the right side, lectures him as Dean swings back and forth in the shot.

East of Eden is filled with Biblical references, most of which relate to the Cain and Abel story. The title itself is taken from Genesis, Chapter 4, verse 16: "And Cain went out from the presence of the Lord, and dwelt in the Land of Nod, on the East of Eden" This isn't exactly subtle stuff. The father's name is Adam for example. The mother, Kate, is the character that has always fascinated me the most though and Jo Van Fleet is great in her few scenes with Dean. Steinbeck didn't go so far as to call her Eve, but she is clearly meant to represent Original Sin.

Eric is right that Dean overshadows Davalos, and everyone else in the movie for that matter. Still the entire cast is quite good, including Julie Harris in just her second feature film. Of the four Oscar nominations it garnered, only Jo Van Fleet went home a winner, in the Supporting Actress category. A little heartfelt drama about a Bronx butcher called Marty beat out East of Eden for the other three awards it was up for; Dean lost Best Actor to Ernest Borgnine, Kazan lost Best Director to Delbert Mann and Paul Osborn lost Best Adapted Screenplay to Paddy Cheyefsky.

The story starts off a bit on the slow side. It takes a while to start to simmer but when it finally reaches a rolling boil the dramatic payoff is worth the wait. East of Eden captures forever a young brooding James Dean as teen angst crystallized in its most pure form.