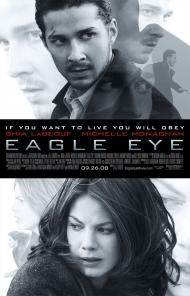 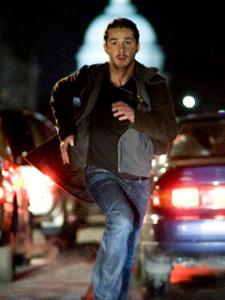 I have been purposely avoiding most of the blatant anti-America films that Hollywood has been putting out in the last couple of years. With Eagle Eye though, Hollywood snuck one in on me.

Jerry is a college drop out working behind a counter in a copy store. One day he gets a phone call and is forced into doing the bidding of a voice over the phone. He is soon joined by a woman who has likewise been forced to do whatever is asked of her. They soon have the police and FBI on their trail as they find themselves breaking all kinds of laws to make the voice happy.

I was not thrilled to see this movie, as the commercials made it seem like one of those films that is too far out there to believe. It was my fourteen year old's turn to pick the movie, so I ended up watching it. The set up is fairly preposterous but the action and pacing are so good. You never have too much time to think about all of the plot holes.

I am going to spoil a plot twist as it is the source of my disdain for this movie. The film opens with a scene of Americans deciding whether or not to assassinate a middle eastern man they believe to be a terrorists. A analytical defense computer, created by Jerry’s twin brother, warns them to abort the mission. The President says to take him out anyway, thus gettting the plot moving.

With subtlety thrown out the window, Eagle Eye, thinly masked as an action thriller, is nothing more than an indictment of the Bush administration’s decision to go to war with shoddy information. This movie even takes a quick jab at Britain’s intelligence gathering as they were the ones supplying Bush with much of his evidence of Iraq’s WMD’s.

It is becoming all to clear that Hollywood is a bunch of America hating chicken shits. Where in the hell is John Wayne when you need him. All of these anti-America films have done poorly at the box office. Maybe, just maybe, the American public would like to see a film that shows the United States, the government and it’s military actually as the good guys? It would not have been hard to rewrite this film to have actual terrorists be the bad guys manipulating the computer. I once joked that Iranians must be putting up the money for these types of Hollywood films. I no longer think it is just a joke. 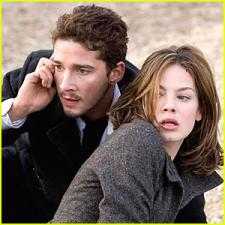 The United States government is not portrayed in a bad light in this movie. The computer created by the government is clearly the villain. At the end the hero saves the president and his cabinet members and the computer is destroyed. The FBI in particular is portrayed in quite a positive manner (I can see John Wayne in the Billy Bob Thornton role).

The evil computer idea (or more precisely, the computer that knows what’s best for mankind and will make the hard decisions to get us there) has been done before, most notably in Kubrick’s 2001: A Space Odyssey. It has never been taken to quite the level it is here though. I agree with Eric that the extremely implausible plot devices and the seeming omnipotence of the computer to control the main characters surroundings only works because the action comes so fast and furious and never lets up. This is the type movie that needs you to check your logic at the door. Just sit back, fasten your seatbelt and enjoy the ride. 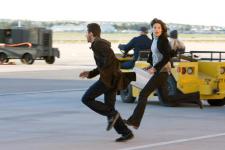 Run, run as fast as you can away from this movie!

Eric, Anti-Bush and Anti-America are two different things. Yes, this movie takes some swipes at former-President Bush and his policies, but it isn't the government that's the villain in this movie, it's the computer, as Patrick said.

Okay, both of you guys were able to get past the implausibility of the plot, but I'm sorry I just couldn't do it. And not because the plot was implausible, but because the plot was fucking impossible! There's no way a computer could do what the computer in this movie does and if it could, well guess what, we wouldn't have to worry about terrorists, we'd rule the fucking world in a day. The creation of a sentient computer capable of making decisions and defying scientific laws on its own would change the world as we know it. Whoever invented that would be able to sell it for so much money that Bill Gates would look like a pauper by comparison. Any chance of deriving any pleasure from this movie was completely shot to hell when computer was able to somehow (magic is the only means I can think of capable of doing it) snap a hundred yard electrical cable and have it fall with pinpoint accuracy onto a man and practically vaporize him with it.

There was only one scene that made me momentarily forget my utter disbelief and that it is the scene at the beginning of the movie when Jerry and Rachel first meet up and are in the car chase that ends up with them in the river on the garbage scow. It's the best action scene and is a genuine popcorn moment. Beyond that one scene though I spent more time laughing at the stupidity of the plot and the writers than I did enjoying this movie.

Eric, you felt insulted by the perceived sleights to America. I felt insulted by by the sleights to my intelligence. You go on about Hollywood being anti-American, when what they really are, are technophobic Luddites who are still creating Frankenstein monsters out of technology they know nothing about and peddling it as entertainment.