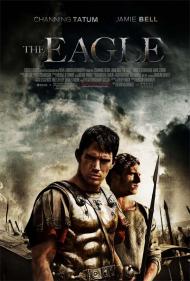 Tahar Rahim, Jamie Bell and Channing Tatum in The Eagle.

In 120 AD the entire Ninth Legion, 5,000 Roman soldiers, disappeared in the wilds of Caledonia, in what is now known as the highlands of Scotland. The Eagle is set 20 years later as the son of the commanding officer of the missing legion arrives in Roman occupied Southern Britain and sets out on a quest to reclaim the Ninth Legion’s missing golden emblem and thereby restore honor to his family name. Accompanied only by his British slave he crosses Hadrian’s Wall and enters uncharted enemy territory.

Sounds like the set up for a great action adventure movie right? Well it isn’t. The script is pretty bad and the acting worse. The relationship at the heart of the movie rings false. Jamie Bell (the now grown-up Billy Elliot) plays the slave Esca. When he refuses to defend himself against a gladiator in the ring he is saved from death by Roman officer Marcus Aquila who is impressed with the slave’s stoic courage. This act causes Esca to pledge eternal loyalty to the Roman.

Never mind the fact that his entire family was slaughtered by invading Roman soldiers, Esca is happy to lead Marcus on his quest. When they set off together the movie turns into a buddy picture. Sure they bicker and get into a fight once but the bond they have forged is never in doubt. Although just why they connect so deeply is never fully explained. It is a relationship we are just supposed to accept because the script writers say so and not because it develops organically in the story.

They act almost as if they have fallen in love at first sight, which frankly would have made for a more interesting movie.

Channing Tatum, with his broad shoulders and chiseled features, looks the part of a Roman soldier but he can’t act his way out of a paper bag. He has about as much personality as a rug and doesn’t have a clue how to deliver dialogue. And when doing a scene without lines he looks as if he is concentrating quite hard but isn’t sure exactly which emotion he’s supposed to be expressing.

The best thing about The Eagle is the way it looks. Visually it seems historically accurate and some of the cinematography features stunningly beautiful vistas, but then at other times the camera work is amateurish and the editing sloppy. The fight scenes are poorly staged and the big climax is a bore, not to mention patently ridiculous. I can’t believe this was directed by the same guy that did the vastly superior Last King of Scotland.

This Eagle lands with a thud; and it’s a safe bet this is one movie Donald Sutherland won’t be listing on his résumé. 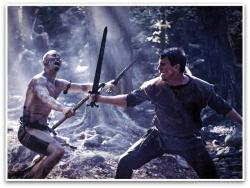 Channing Tatum in one of only a few action scenes.

The Eagle acts as a sequel to last years Centurion, which showed one possible ending to the 9th legion.  Both films focus more on the side of the Romans than the Brits.  Lets be honest, who would you rather watch, the mighty Roman army, with it's armor and weaponry or the dirty folks who live in mud houses.  Of the two films, The Eagle seems more authentic in its look and gives more screen time to the Brits.

The script however, never finds an emotional focal point.  Marcus wants the eagle back and the audience is expected to get behind him in his goal.  The loss of the eagle was apparently a loss of honor for Marcus's family.  Really?  He occasionally has to hear some bourgeois toga wearer make a disparaging remark about his father, but he was still able to rise through the ranks to the point of becoming commander of a military base.  Perhaps if he had been a foot soldier denied a commission, and the hand in marriage to an upper class woman, I would have bought it.  As it is, Tatum just does not have the acting chops to convey a man on a mission based solely on restoring the honor of his dead father.

There is far too much yakking and not enough action, and what action there is does not ring true.  Although they are being pursued by men who run hard enough to catch up to mounted horses, Esca leaves a wounded Marcus behind to go collect some men and find their way back to him.  In true movie fashion, Esca makes it back mere seconds before Marcus's hiding spot is discovered.  Then we find that this tribe of marathon runners have dragged an eight year old kid along with them.  Did they take turns carrying him and were not slowed by the burden, or did the eight year old keep up on his own?

The relationship between Esca and Marcus is tenuous. As Patrick wrote, it never rings true. Esca is not exactly "happy to lead Marcus on his quest." He purposely stalls in finding their destination. The movie never says why. Esca starts the journey by making things more difficult than they needed to be, but then becomes the hero. I am not sure at what point he changed his mind.

I agree with Patrick, a love story would have made better sense.  Make Esca a girl or make them gay.  Either way it would have better explained their relationship.  As it is, it is like a Jew and a Nazi becoming best  buds, or Nigger Jim thinking Huckleberry Finn is really his friend.  Marcus's and Esca's relationship never rang true.

I am not sure why the story of the missing Ninth Roman Legion suddenly became vogue again, but with these kind of films being made about it, it is time to put the story to rest. 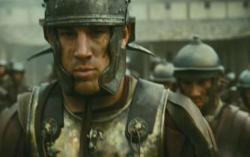 Channing Tatum shows his serious face in The Eagle.

I had some small hope that after reading how bad you both thought this movie was that my expectations would be lowered enough that I might actually enjoy it. Turns out though that you guys didn't quite do justice to how truly god awful boring this movie is. It started bad and it just got worse as it went along. I couldn't wait for it to end and I felt every single, solitary minute of The Eagle's nearly 2 hour running time.

Patrick, you are so right about Tatum. He's a rotten actor. There are some scenes between him and Jamie Bell where there could have been an undercurrent of sexual tension (they certainly seem to enjoy their wrestle together), but I got the feeling that Tatum doesn't have an undercurrent. Everything about him is written there across his blank features.

Likewise I agree with both of you that making them gay or having Esca's character be a woman, couldn't have hurt this story. I'm not sure it would have helped it all that much, but it couldn't have made it any worse.

Not only is there too much talking Eric, but it also takes way too long for the story to get going. The real plot is Esca and Marcus going after the Eagle (it is the name of the movie after all), but it takes more than 30 minutes before they set off. And then most of their search is just shots of them riding over countryside. Granted, I agree that it's pretty countryside, but I only need so many shots of it.

The final chase is just silly. Two men on horses can't outpace a bunch of guys on foot? Were they stopping to wrestle on the way? And dragging the eight year old just so they could kill him is even more silly. They could have just told Escus that they'd killed him. I'm pretty sure he would have believed them.  Or, they could have just brought his tiny head in a bag.

Both of you guys point out that the film has a gritty, realistic look to it and I agree, but maybe what it needed was a little more fantasy. It might have provided a little more pizzazz and color. As it is, The Eagle gets my vote for worst movie of the year so far.