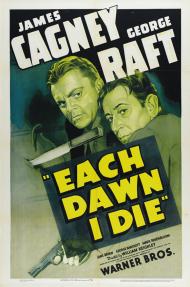 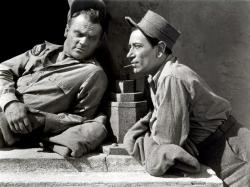 Each Dawn I Die is yet another in the seemingly endless parade of classic movies Hollywood churned out during its greatest year ever, 1939. This one’s a prison yarn starring James Cagney and George Raft. Cagney plays intrepid reporter Frank Ross, framed for manslaughter and Raft is the aptly monikered ‘Hood’ Stacey, a big time gangster that Ross befriends in the joint. The story is filled with prison clichés but is action packed throughout and culminates in an extremely violent attempted prison break that somehow slipped by the censors.

This was Cagney’s second of three movies released in 39, sandwiched between western The Oklahoma Kid and gangster classic The Roaring Twenties. This also marked the one and only costarring vehicle between Jimmy Cagney and George Raft, although Raft had played a bit part as a hoofer in Cagney’s movie Taxi! back in the early 30s.

Director William Keighley keeps the stereotypical plot steaming along at a brisk pace. It includes a sadistic guard and a convict getting murdered by another inmate using a shiv. Cagney does some fine acting. He breaks down in tears of hopeless frustration a few times and at one point gets placed in solitary confinement (the hole) for a six month stretch. When he gets out he’s become a hardened criminal on the verge of going completely stir crazy. Pulling out the stops, a menacing Cagney threatens, “I'll get out if I hafta kill every screw in the joint!”

In a convoluted plot device Stacey has Ross finger him for sticking the inmate with the shiv. At his trial he executes a daring escape from the court house. The plan being that Stacey, on the outside, will figure out who framed Ross and prove his innocence. Things don’t go as planned however and everything culminates with Stacey conveniently back in the Big House just as the big break is unfolding.

George Raft delivers such clichéd lines as, “Okay, canary, start singin'!” From his mouth these words sound as if they’d never been uttered before. ‘Hood’ Stacey is the role he was born to play and he and Cagney, as the wrongfully imprisoned reporter, play off each other well. They were pals in real life and their scenes together fairly ripple with charisma.

Each Dawn I Die didn’t invent the prison picture but it has been influential on later movies in the genre. Overlook the plot contrivances and enjoy two of the greatest tough guy stars ever to grace the silver screen. And while you’re at it chalk up another classic to 1939. 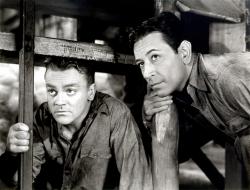 This overly melodramatic prison picture remains highly watchable nearly 75 years after its release mainly because of its two stars. Cagney and Raft make a great pair and it's a pity this was their only real movie together.

As Patrick wrote, the plot is rather convoluted. Cagney is convicted of murder quite easily and his trial is skimmed over very quickly. The reasoning behind Stacey going back to prison are also pretty weak and surely there must have been an easier way to get the confession they needed that would free Cagney.

What saves this movie from its melodramatic excesses is the great performances by Cagney and Raft. Cagney plays his usual tough guy, but as Patrick pointed out, he also breaks down a few times. In front of the parole board, he actually cries and begs to be freed. After his long stay in solitary confinement, it seems that his very sanity is dangling by a thread. He also shares a quieter, more subtle moment with his mother, when she comes to visit him in prison.

Raft is equally good, in the less emotional role. He plays the smooth criminal quite well. He's charming and deadly. Because of the Hays Code, we know what his fate will be by the end of the film, but until then he gets to steal several scenes as the bad boy mobster who makes a daring prison escape. He's a villain, but we're on his side, in the same way we are with the Corleones and the Sopranos.

At just 90 minutes, the story moves briskly along. Much of the plot is rather cliched, but Cagney, Raft and company make it work. I don't know that I would quite call it a classic, but for the chance to see Cagney and Raft together, it's definitely worth watching. 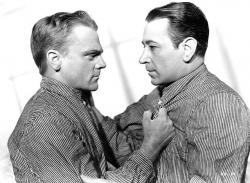 James Cagney and George Raft in Each Dawn I Die

Echoing my brothers, Cagney and Raft made a great team. Both usually played tough guys who were often on the bad side of the law. However, each had a very distinct screen presence made all the more noticeable by their easily identifiable voices. I enjoyed seeing them together, but this film has its flaws.

Cagney and Raft play inmates who get into a fight the first time they meet but end up becoming friends. The film playing in the prison when an inmate gets killed is Wings of the Navy (1939) in which John Payne and George Brent play competing brothers. It is a fitting film for this story, but it is also a brief commercial for another Warner Bros film.

As dramatic as this film plays, I laughed at one unintentionally funny moment. After Raft escapes, an officer questions Cagney about it. He faces Cagney who is quivering in fear. Then comes the abuse. The officer slaps Cagney on his upper chest as light as you would slap a small child. Cagney reacts though, as if it was a hard blow. The officer does it again and Cagney repeats the action. I have seen better on the WWE.

When Cagney gets out of the hole for the first time, he makes a speech that Patrick was impressed with that I thought was a bit too much. "Now I am a convict. I act like a convict, smell like a convict. I think and hate like a convict. But I'll get out. I'll get out if I hafta kill every screw in the joint!" It is not exactly the kind of thing you would think to say if you did not want to go back in.

The worst part of this film was that Cagney gets the shaft the entire film. He was framed and spends all that time behind bars. He gets beat and put into solitary confinement. By the time Raft gets the guy to confess to framing Cagney, people have died and Cagney has lost years of his life in prison. So he gets released from prison? He still came out the loser as he will never get that time back. The film even agrees with me by having someone tell Cagney right after his release that, "It hasn't been in vain." referring to his time spent in prison. Cagney should have slugged the guy for making such a stupid statement.

Each Dawn I Die is a chance to see two great actors paired but it is not the best film by either.