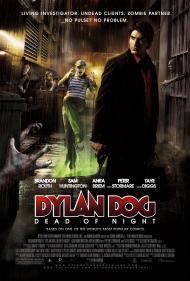 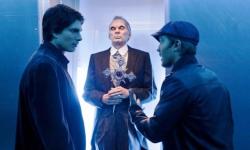 Dylan Dog is a character from a popular Italian comic book.  It is not well known in the United States, and it seemed as if it was almost not going to even get a U.S. theatrical release.   It was made two years ago, released in Russia last year, and had it's Italian premiere a month earlier than it's U.S. one.  Consider that we seem caught up in vampire and werewolf movies, it was not a bad idea to release it here.

Brandon Routh stars as New Orleans private detective Dylan Dog.  He is joined by his Superman Returns co-star Sam Huntington, who plays his sidekick Marcus.  Dylan is fully aware that vampires, werewolves and zombies roam the New Orleans streets.  He use to be their go between, until his fiance was killed.

He gets pulled back into the under world when an importer gets killed and a relic of importance is stolen.  Dylan falls for the importers daughter and Marcus gets turned into a zombie.  Other than the stench, they learn to live with the inconvenience.  Marcus even attends a zombie support group.  The stolen relic enables the possessor to bring forth a monster to do his bidding.  Dylan must figure out who stole it and stop them from using it.

The whole movie has a "B" quality look to it.  Routh and Huntington are good but neither are A-listers.  The special effects and make up are not top notch.   The CGI scene at the end, with the demonic monster looks obvious.  Kurt Angle looks more threatening without his werewolf mask, than with it.  As such, Kevin Munroe never lingers on the special effect shots and we rarely see werewolves in full makeup.

Even with the lack of big studio money, Dylan Dog: Dead of Night still manages to entertain.  It comes across as old school.  Dylan drives around New Orleans in a Volkswagen convertible, investigating the goings on.  He carries guns especially made for his job, wooden tipped or silver.   He does not use any science fiction gadgets.   Thankfully, the  vampires are old school as well.  They cannot come out in the daylight.  They are more kin to Jerry Dandridge than Edward Kullen.

On televisions Being Human, Huntington plays a wimpy werewolf, who can only turn during a full moon.  Sam Witwer plays his far superior vampire roommate, who walks around during the day and seems to be able to do anything he wants, including having sex.   Dylan Dog: Dead of Night levels the playing field.  The werewolves can turn at will, and not just once a month like a predictable, annoying menstrual cycle.

Tiziano Sclavi created the popular Italian comic book in 1986 and it still out sells other comic books in Italy today.  Dylan Dog's look was originally based on actor Rupert Everett.   Routh wears his trade mark red dress shirt and jacket.  The biggest differences is that the comic books take place in London and Dylan's sidekick is a Groucho Marx impersonator.  The movie makes a nod to its creator in a scene where Dylan and Marcus come across an old vampire named Sclavi.

Despite its weaknesses, my 15 year old son and I enjoyed Dylan Dog: Dead of Night.  It is a fun trip to the supernatural darkened back streets of New Orleans.   If it catches on it could be a decent movie series, and if it does, I hope they find some better effects.