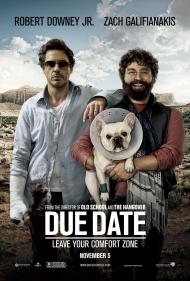 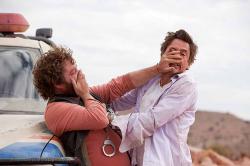 Zach Galifianakis and Robert Downey Jr. in Due Date.

Taking two opposites and sending them packing on a cross-country jaunt is one of the oldest Hollywood plot devices there is.  Gable and Colbert made It Happen One Night a long time ago, while Grodin and De Niro made a Midnight Run in the 90s and a whole bunch of other people did before and since.  Although Due Date doesn't add all that much new to the genre it does manage to entertain for a while at least.

Robert Downey Jr. plays Peter, an impatient and gruff expectant father who is trying to get home to Los Angeles from Atlanta, Georgia.  He runs into Ethan (Galifianakis) at the airport and they end up both being tossed off the plane because Ethan upsets the air marshal by talking about bombs and terrorists and he mistakenly thinks Ethan and Peter are together.  For a reason known only to the screenwriters, Peter leaves his wallet on the plane in the seat back in front of him (who does that?), so without money or ID, he reluctantly accepts a ride with Ethan.

As in almost all road trip movies, there's a straight man and a comic.  This time it is Downey Jr.  playing the straight man to Galafianakis' funny man.  Although they play well enough off of each other, their connection is so tenuous that it becomes increasingly difficult to see why they remain together as the movie goes on.  Ethan becomes so increasingly annoying and even life threatening that Peter is an idiot for staying with him.

Ethan is a wannabe actor, but at times he comes across as so stupid that basically he seems mentally handicapped (or what used to be called retarded).  He spends all of their money on pot.  He wrecks their rental car, nearly killing Peter in the process.  He's incapable of even the smallest task, such as collecting money from a Western Union.

Only at select moments do we get to see Ethan as an actual human being.  He's carrying the ashes of his dead father in a coffee can and there are a couple of good scenes where Peter and Ethan actually communicate and they actually get to bond, but sadly those moments are too few and far in between.

The humor is there and it works for the most part, although by the time Ethan is rescuing Peter from a Mexican border station you'll probably have decided that it's gone too far and is long past any credibility.

Obviously the appeal of a road movie is that it comes with a built in beginning and end.  The journey goes on until the destination is reached.  Usually you hope that the characters and maybe even you, have learned a little something along the way.  While this movie does provide some laughs along the way, you won't be too sorry to see the trip come to an end. 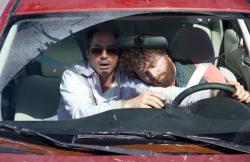 They should have died in the car accident.

Due Date definitely jumped the shark when Ethan rescued Peter from a Mexican border station.  Not that it made much sense prior to that, but a car chase across a national border, in a stolen vehicle and trailer, seemed more like a drug induced sequence from Harold and Kumar.

The writers did not think the issue with the wallet out very well either.  The movie suggests that Ethan took it so Peter would have to spend time with him, as Ethan was lonely after his father's passing.   At their first meeting it is made clear that Ethan has a good friend, so he is apparently not alone in this world, so why was he so desperate for Peter's company?  Later, when Peter gets a ride from Darryl, and seems to be about to leave Ethan, he does not confess that he has his wallet.  Did he intend on never giving it back?  Apparently Ethan had read the script and knew Peter would invite him along, even though his carelessness had almost killed him in the previous scene. 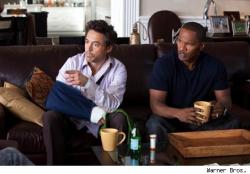 Robert Downey Jr. and a wasted Jamie Foxx in Due Date.

Yes the Mexican border station rescue is over-the-top and some of the character’s motivations are suspect but Due Date does contain a modicum of charm and a smidgen of heart. Unfortunately it is also patently ridiculous and features two completely unbelievable central characters.

The road movie it most closely emulates (and which I’m surprised neither of my brothers mentioned) is Planes, Trains & Automobiles, with Downey Jr. in the Steve Martin role and Galifianakis trying (and failing) to fill John Candy’s giant shoes. But while that movie is a holiday classic featuring two great comic performances, this movie is pointless drivel by comparison.

Eric (to add to your list of ludicrous gags) how about them drinking Ethan’s father’s ashes as coffee? That’s a barrel of laughs. Most of the written jokes aren’t much better. Like Ethan speaking to the coffee can where he keeps his father’s ashes, “Dad... You were like a father to me.” Not funny. Although I did chuckle a bit when he proudly tells Peter that he has 90 friends on Facebook but 12 of them are pending.

Jamie Foxx is wasted in his cameo, which adds nothing to the story. Apparently a scene with Alan Arkin as Peter’s long lost father was shot but left on the cutting room floor. I wonder why they bothered to leave the scene where Peter tells Ethan how his father left when he was a kid in the movie since it slows the story down and now has no pay-off.

Due Date is an excellent example of how to take a tried and true formula and make it into a strictly mediocre movie.