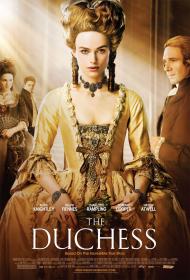 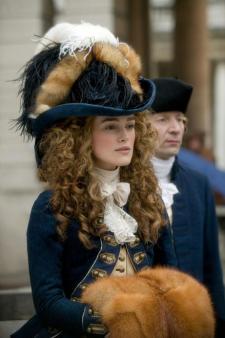 This movie is a lock for a Best Costume Oscar nomination.

The Duchess is a Harlequin romance novel come to life. It's pure soap opera. It's a chick flick in period costume. It's not a movie I enjoyed very much.

It's purported to be based on a true story and it relates the married life of Georgiana, the English Duchess of Devonshire in the late 1700s. Georgiana's maiden name was Spencer, and a descendant of her brother was none other than Lady Di. Georgiana's husband, the Duke was a passionless man whose only purpose in getting married was to produce a male heir. He had many affairs, including one with Georgiana's best friend whom he eventually invites to live with them and the three of them end up sharing a home for many years.

Georgiana's attempts at having an affair were less successful, as the Duke did everything in his power to prevent them. Her one successful affair resulted in her pregnancy, the child of which the Duke forced her to give up. Despite her unorthodox personal life, the Duchess was the star of the Royal circle during her time. She used her popularity to support political causes and candidates. Apparently she was sort of the English Marie Antoinette, only without being beheaded.

This is the kind of movie that gets nominated for costume and art direction at the Oscars. And frankly that's about all this movie deserves to be nominated for, because while it does look good, I couldn't get invested emotionally in this movie at all, but then I don't read Harlequin novels either. To be fair, the costumes and art direction are impressive. Knightly in particular gets to parade a variety of fashionable outfits, including a long line of the most remarkable hats. Also, most of the movie takes place in palatial homes with drawing rooms larger than most homes today. If nothing else, the movie looks good.

I'm not a big Knightly fan, but she does play posh well. Fiennes is merely required to be stiff and English, something I think he could and probably does do in his sleep.

The big flaw in the plot of the movie is that the Duchess begins the movie naive and stays that way throughout the movie despite all of the things that happen to her. She knows her husband and has been married to him for many years and yet she still thinks that when she tells him about her lover he's just going to say, "Oh, okay, go ahead and sleep with him."? And when she gets pregnant by said lover and tells her husband, does she really think he's going to say, "Oh, okay, go ahead and have his baby."?

Clearly this movie is aimed at women as it's a female fantasy. All of the Duchess's problem are caused by a domineering man and her lover is devoted to and subservient to her. She is a loving mother, but never has to spend any time with the children when it isn't convenient and never gains the slightest weight despite giving birth so many times. And she gets to wear beautiful clothes and be waited on hand and foot.

The Duchess sounds like she was an interesting woman. A well-written script about her could make a good movie. This isn't that movie.

Keira Knightley and Ralph Fiennes in The Duchess

I am not sure if Scott completely missed this or was just too bored to care, but this film is an obvious analogy to the life of Princess Diana. Some of Scott’s descriptions of Georgiana can easily be applied to Diana, “Despite her unorthodox personal life, she was the star of the Royal circle during her time. She used her popularity to support political causes…She is a loving mother, but never has to spend any time with the children when it isn't convenient and never gains the slightest weight despite giving birth so many times. And she gets to wear beautiful clothes and be waited on hand and foot.”

As Scott noted, Georgiana and Diana are distant relatives. Both married much older titled men who seemed to have little passion for their wives, outside of their ability to give them an heir. Both women were crowd favorites and fashion trend setters. Both had gossip continuously swirling about them, usually involving them or their spouse having an affair.

The production company even came under scrutiny when they initially used Lady Diana in their advertising campaigns. Movie posters featured such slogans as, "Two women related by ancestry and united by destiny." They even stole a quote from Diana when they used a variation of a line she gave in an interview, "There were three people in her marriage." I found it interesting that some in the British media, which hounded Diana in life, found it in poor taste to use her image in promoting this movie after her death. Michael Hellicar wrote in the Daily Mail, "the Diana link is being so heavily, and it has to be said, so cynically and crudely promoted.”

Scott accurately called this a Harlequin romance. A bunch of wealthy people sleep around and betray one and other. The only thing even remotely fascinating about this film is the comparisons it makes to Diana and Charles. My favorite one is when Charles Grey sees Georgiana being mobbed by men at a party and asks Bess, “Is it always like this?” She responds, “Well, as they say, the Duke of Devonshire must be the only man in England not in love with his wife.” Is that not how much of the world saw Prince Charles when he neglected the beautiful Diana for the company of the far less attractive Camilla?

Who said these lines, Georgiana in this film or Diana in real life?

“I have many faults, as you well know. Not least among them is my ability to draw attention. Perhaps we could use that to our advantage.”

“I fear I've done some things in life too late and others too early.”

“They say it is better to be poor and happy than rich and miserable, but how about a compromise like moderately rich and just moody?”

“I don't want expensive gifts; I don't want to be bought. I have everything I want. I just want someone to be there for me, to make me feel safe and secure.”

Although it is somewhat fascinating comparing these two famous women and their spouses, it is an unfair one to make. Georgiana lived in a time when a husband had the legal right to beat his wife as if she were his property. Sure, Diana had royal responsibilities but she lived in a world of emancipated women. If anything has stayed the same over the years is that a young woman can easily be seduced by fame and wealth.

As for the quiz, the first two quotes are from this film while the last two are Diana’s but all apply to each other.